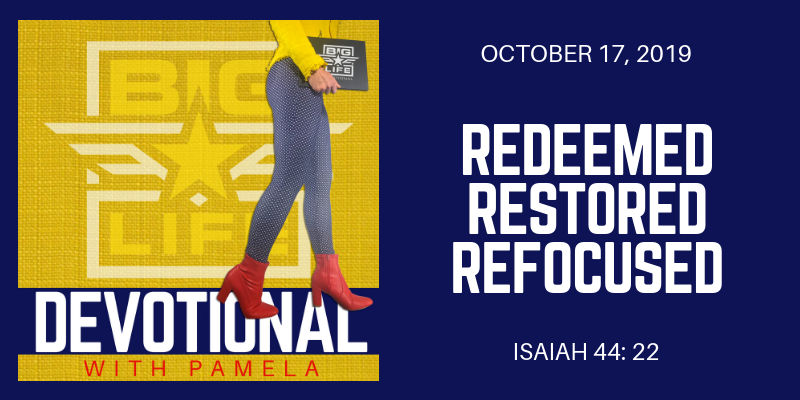 Were you once doing well, going strong, making major progress and then you got tripped up? Something stopped your progress and you’ve been a bit stalled since. You lost your get up and go. Your motivation is now low. You say you will, but you won’t. You get your hopes up that this time you’ll stick with it, this is it … then you’re disappointed once again with another start strong and stop quick.

Or maybe you’re just now shaking off the past little hiccup in your journey and you’ve started again. You’ve made a little progress, but deep down you’re worried you’ll fail again. You know your own track record and feel it’s just a matter of time until you mess it all up.

Have you ever wondered if maybe God gets frustrated with us? Imagine God has this great plan for your life and you’re missing out on it because you’re tripped up and can’t seem to stick with the plan. How does God feel about this? What does he have to say to you about it today?

God wants you to know he’s in the business of redeeming and restoring, then refocusing. He’s got your number and he just called it!

Look at Peter. Most of us know the disciple Peter for one thing … denying Jesus. You remember the story, Jesus is preparing the disciples for his own crucifixion which was ahead. Peter says “Jesus I will go with you even to death.” And Jesus says, Peter before the rooster crows, you will deny you even know me 3 times.

And Peter failed Jesus, not once, not twice, but indeed 3 times. 3 times he denied Jesus. And when he heard that rooster crow he remembered what Jesus had said. Can you imagine his shame? Can you imagine the reality of his failure?

But here’s the thing for us to remember and apply today. Jesus knew Peter would fail, and he chose him anyway. This was no surprise to Jesus. And God knew you would screw up too. He knew you would get lazy. He knew you would waiver in your commitment. He knew you would get distracted and lose your focus. He knew in advance every misstep you have taken and will take and he is choosing you still. GOD IS STILL CHOOSING YOU. He hasn’t thrown his good plan for your life out the window. God has chosen you and he wants to work with you through your failures and use them as a set up for your comeback. He sees your struggles and says “ahhhh, I can help her with that! I know exactly what to do.”

God wants to partner with you. With his limitless power and your God given potential, you can do the impossible … but you can’t do it on your own. You’re going to kill yourself trying to overcome your past and future failures on your own. God wants to restore you. He wants to help you. Won’t you surrender to him and recognize YOU NEED HIM. You will always be a work in progress this side of heaven. Go ahead and make friends with the process.

Now, shed the shame. Failures and shortcomings come with a natural measure of guilt and shame. But your failure is not the end of your story. Peter’s failure wasn’t the end of his story. He had this epic public fail that we’re still reading about today. Gosh, aren’t you glad to know your failure probably won’t even be remembered 5 years from now. If Peter can overcome his failure, I’m pretty sure you can too. Shame and guilt are and indicator of where you went wrong and what you can do different. It’s temporary. Recognize it, then shed it. But here’s what the enemy does. He comes in and takes that natural shame and guilt you feel and attaches it to your identity. The enemy takes your failure and says YOU ARE a failure. He’s a liar. He’s a manipulator. He twists the truth to rob you of your power and stall your progress.

So you screwed up. So you’ve gone backwards again. So you wasted some time. Okay, whatcha gonna do about it now? God’s already over it, can you get over it too and make progress again? God’s desire is for you to be restored and use every ounce of the hurt, every lesson in the failure for good in your future. But you can’t do that carrying around shame.

Understand what shame does in your life … it creates a distance between you and God. You run and hide. You pull away from not only God, but you pull away from the very people he has put in your life to help you. Where are my hiders at? You’ve had a little hiccup. You went backwards … and now you’re hiding! You’ve pulled away haven’t you?

If Peter would have been stuck in shame, he would have avoided Jesus. But we read in John chapter 21 that after Jesus had been crucified and put in the grave, the disciples were on the water fishing. Jesus walks up and says “hey boys, you catching anything?” When they realized it was Jesus, Peter was the one, and the only one, to get out of the boat and head to Jesus. He didn’t avoid Jesus, he swam to him.

Peter could have sat in that boat and hung his head, beating himself up for his epic failure. But he made a choice to instead swim to Jesus. Oh girls, we need to jump out of the boat and start swimming too. We can’t sit here rehashing our failures for the 73rd time. Remember, God knew you would screw up and he chose you anyway. He can work with exactly what you have. He can meet you exactly where you are right now and take you somewhere greater.

Don’t let anything in your past keep you from the future Jesus has for you.

Isaiah 44:22 says “I have swept away your offenses like a cloud, your sins like the morning mist. Return to me, for I have redeemed you.”

Peter became one of the greatest crusaders for Christ. A former failure. Redeemed. Restored. Refocused.

A fail doesn’t make you a failure. God knew all the times you would start and give up, and yet he’s still betting on you. He knows you, he believes in you. He wants to restore you. Redeem you. And refocus you.

You have a chance to start again. You were born for this. Let’s get going.

Within the inner circle of BIG Life Mentoring are the amazing gals I get to personally mentor. Yesterday, one celebrated her 1 year of being sober. One full year since her last drink. What an accomplishment. What a life change. I wonder how many times she had attempted to change this area of her life before that and failed? What if she would have never tried again? She would be missing out on the amazing life she is living today. Also yesterday, another one of the women I mentor celebrated her 1 week clean of drugs. One full week of pushing through the withdraws and fighting to get her life back. How many times has she tried before? Many. But this time she’s partnering with God. This time she’s receiving the redemption, restoration and refocus only he can offer. She’s stepping into a life free of the guilt and shame of her past and oh the future that awaits her.

Redemption, restoration and a complete refocus is available for you too my sister. Won’t you grab it and run with it today? Run right into the arms of Jesus who will guide you every step of the way. Run right into the life that’s always been waiting for you. Here we go. Today we shed the shame and guilt and we step up to receive what is being offered for us.