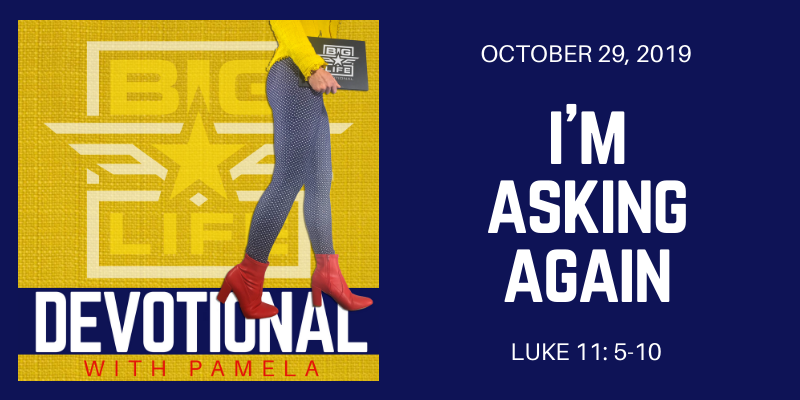 Luke 11:5-10 Jesus teaching on prayer “Suppose you went to a friend’s house at midnight, wanting to borrow three loaves of bread. You say to him, ‘A friend of mine has just arrived for a visit, and I have nothing for him to eat.’ And suppose he calls out from his bedroom, ‘Don’t bother me. The door is locked for the night, and my family and I are all in bed. I can’t help you.’ But I tell you this—though he won’t do it for friendship’s sake, if you keep knocking long enough, he will get up and give you whatever you need because of your shameless persistence.

This is a picture of persistent and expectant prayer. We trust that God is good, and so we ask for His gifts.

In 2 Corinthians Paul asks the Lord for something three times, then Paul stopped praying about it. Why? It wasn’t because he had given up or because he thought it was only okay to ask 3 times. But Paul received his answer from God. His answer was no. Can we trust that sometimes his answer is no because he knows better than us? Because he sees the big picture and we don’t. Because he knows the end from the beginning. So we can keep asking until something happens or until God says no. And if God says no, may we have the grace to walk away from it and pursue that which God is saying yes to.

I know, I know, you’ve already asked Him a million times, I see those eyes rolling.
But today, ask Him a million and one.
Yes.
Ask Him AGAIN.
Ask Him again for that child to come home.
That marriage to be healed.
That mountain to move.
Ask Him again for that friendship to mend.
That work to begin.
That end-of-tunnel light to appear.
Ask Him again for the one who needs rescue, the one who needs healing, the one who needs new direction, new guidance, new focus.
Yes.
Even if that ‘one’ is you.
Ask Him again for what you need.
For what you want.
For joy in the sorrow.
Help in the struggle.
A sip of living-water in the heat of your schedule…and the time to just sit at the well, amen?
Ask Him again.
Ask Him again to provide springs in your land; and while you’re at it, give thanks for that land, no matter how dry it is now, knowing He’s given it to you with good purpose.
Yes.
Ask Him again.
Ask Him again to dig up the soil and plant the seeds.
Ask Him again to stir up and settle, make and remake, pour out His peace that passes all understanding, because frankly; you could use a hefty dose about now.
Yes.
And Amen.
Ask Him again for all that seems lost and all that seems nowhere even near the city of possible…and ask Him believing He can.
Yes.
Ask Him again.
Not because you don’t think He heard you the first million times, but because you are realizing the longer you {truly} live, that persistence is a pretty strong faith-builder; not to mention how close it keeps you to Him for whom all things are possible and nothing is too hard, and because faith-based strength to persevere and closeness with your Creator is what you REALLY need.
Whew. Yes. Absolutely.
Ask Him again.
With fresh eyes and a renewed spirit and a passionate resolve that He can, and if it’s His Will…He will.
And if it’s not, you will keep on asking.
You will keep on seeking.
You will keep on believing just like Steve Perry says.
Because persistent faith is where it’s at.
It fastens it’s gaze on hope.
The hope that is always three steps {Father, Son, Holy Spirit} ahead, providing the perfect focal point.
Yes.
And it never disappoints.
Amen.
So today; bow low, look up, and ask Him AGAIN.