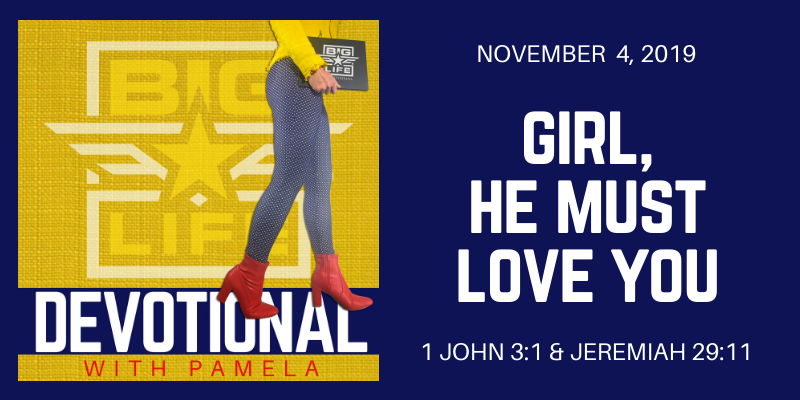 I’ve spent the past week way down yonder on the Chattahoochee and I’ve found out just how hot a hoochie coochie is. Ends up, not real hot in November. Yes, for real, we’ve been tiny house living in Georgia on the Chattahoochee River. Inspired by Alan Jackson’s old song, I started listening to some country music and ya’ll it’s been a hot minute since I was boot scootin’ and root tootin’. I don’t even own boots! I heard a song for the first time called “God Must Really Love Me.” Ends up it’s 10 years old, but like I said, it’s been a while since I listened to country, but being on the Chattahoochee, I felt obligated.

When I showed the worst, He saw the best
He pulled the world right off my chest
Everyday I wake up I feel blessed
God must really love me

Do you know that’s true? God always sees your best. Even when you’re acting a fool and giving nothing but your worst, he sees your best. He never loses sight of your potential and your value. He never questions your worth. He never doubts who you really are because as your creator, he knows you intimately. He imagined you in his mind, then formed you with his own hands and his creation is what he sees in you.

There’s nothing you could have done, and nothing you could do in your future that would change the way he sees you. You are his beloved. You are his prized daughter. You are his chosen one. Darn it woman, when will you really buy into that and walk in that as your truth? This is what changes everything. This is where your confidence comes from. This is your power and strength to change and walk a new path … see what God sees. He sees the best, even when you’re showing the worst.

Back when Saul was still hunting down Christians to cut their heads off, God knew this man would change the world. He knew one day Saul would surrender, he would be touched and forever changed, he would be given a new name as Paul, and he would be the one to write the majority of the new testament we read today. Back when Paul was still acting a fool as Saul, giving nothing but his worst, God saw the best.

1 John 3:1 says “See what great love the Father has lavished on us, that we should be called children of God! And that is what we are.” You are his child and his love lavished on you can change anything and everything in your life!

We have a podcast listener who battled a drug addiction for 10 years. For 10 years she experienced her worst. She wanted a different life, but the path there terrified her. She had been warned of the violent withdraws and the hell she would endure to get sober. In fact, that was the fear that held her prisoner for so long, the painful process of change. She had tried before and failed. But this time it was different. This time she was fully surrendered to God. To her God who still saw nothing but the best in her and he pulled the world right off her chest. On Wednesday she celebrates 4 full weeks of sobriety. No drugs … and no violent withdraws! All she had to do was take that leap, pour out those pills, and God swept her up and carried her through.

Now today, she’s experiencing what God always saw in her … her best. You couldn’t make her turn back now. She’s living and experiencing the life that’s always been waiting for her. This can be you too. Maybe it’s not drugs, but maybe it’s regret. Maybe it’s guilt or shame. Maybe it’s a crippling fear of failure. Understand these things effect your life in the same way, they keep you from your best. They cause you to show up for life as a less-than version of you. A you that sits it out, a you that shrinks back into the corner, a you that never shows up for your own game of life and therefore is in a perpetual state of losing.

We have another podcast listener who has battled shyness and depression most of her life. When fear creeps in, she creeps right on out. And she knows it. She knows all she has missed out on. She knows there’s more available to her. God has even been giving her dreams and glimpses into the future he has available for her. Dreams so big they terrify her.

These dreams are simply proof … proof God still looks at her and sees the best. He has never lost sight of what he put down deep inside of her. And though it’s taken her over 40 years, he’s saying NOW IS THE PERFECT TIME. Now I want you to step into what I’ve always known to be your truth. Shed this disguise of depression and fear you’ve claimed as your own. That’s not your identity.

And let me tell you, she’s doing it. For the past month she’s been taking leaps and bounds out of her comfort zone and you know what she’s finding … she’s finding a gal she actually likes. Yes, she’s still carrying around the extra weight from the past years of eating in shame and hiding in pity. That won’t change overnight. But she’s doing it. She’s making the next right choice. She’s showing up for her life and giving what God has always seen in her … her best.

Let me speak directly to you … where have you been in a perpetual state of losing. Losing hope. Losing time. Losing you. You were never created to be a loser. EVER. Losing is the result of listening to the enemy who is a loser damned to hell, and losers never want to lose alone. Misery loves company and you shouldn’t be giving him yours.

God has a plan for you. A specific plan for your life. A plan that uses everything you ever lost for something ridiculously good. In Jeremiah 29:11 God says “For I know the plans I have for you, plans to prosper you and not to harm you, plans to give you hope and a future.” Honey, these are his specific plans for you. He plans to give you a beautiful future. He plans to prosper you. This is his will. This is what he’s working for you.

You are more than a conqueror through Christ Jesus, now show up and start doing some conquering sister! This is your time. You’re not hearing this by some random coincidence. You’re hearing this because God still sees the best in you and he’s encouraging you to start the journey, or continue the journey.

And all of this is proof, honey God must really love you.

When I showed the worst, He saw the best
He pulled the world right off my chest
Every day I wake up I feel blessed
God must really love me

All this time, through your missteps and mistakes, through your struggles and setbacks, through your fear and your failure, God has been letting your story build. He’s been hand crafting exactly how he can use it all. He’s never taken his eye off you once. He’s never thrown his hands up and said “well, there she’s gone and blown it, I can’t work with this.” NO, HE’S GOD … HE CAN DO ANYTHING … HE CAN WORK WITH EVERYTHING. AND HE DOES.

Your story has been building and God is just putting all the pieces together to use your life in a powerful way. Why, because girl God really does love you. Even if you showed your worst yesterday, God still saw the best. And you know what he’s counting on … he’s counting on the day when you finally step into your potential and live the rest of your story. The part where you leave behind the worst and start living as your best.

How about that day be today? God has given you every thing you need to make that day today. Just as my friend who changed her life 4 weeks ago by getting rid of all the pills, and just as my friend who started daring to believe the big dreams God was giving her this past month, you can step into your best too. Why? Well the only reason I can think of is God must really love you!

By Lonnie|November 4th, 2019|Categories: Devotionals, Podcast|Comments Off on 460 Girl He Must Love You