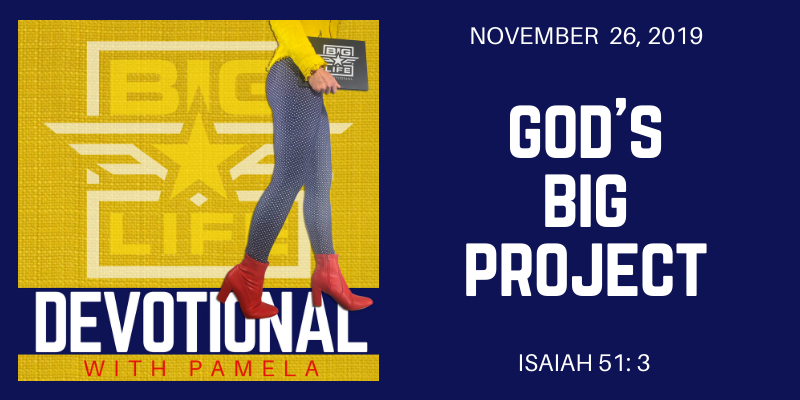 Have you ever taken an honest look at your life, where you are, how you are living, and who you’ve become, and honestly been a little disappointed? Or maybe a lot disappointed? This isn’t how you imagined your life would be. You thought by now you would have things figured out. You thought by now it would be easier and you would be happier, but the reality is a little shy of the dream.

Show me your ruins, and I’ll show you where God is primed to work in your life!

Our almighty God specializes in restoration. If he had a TV show, he would knock Fixer Upper right off the air. You think it’s amazing to see an old house fixed up and turned into the perfect mix of open spaces, large windows and shiplap … girl, wait till you see what God wants to do with your life! You won’t believe what he can do with your ruins. Not only what he CAN do, but what he WANTS to do. What he’s willing to do. What he’s trying to do, right now.

You don’t have to hire God to come in and restore your life, then sit on a waiting list for your turn, hoping at some point his work schedule clears up and he has time to work on you. He is available TODAY to begin the renovation. He is eager to take what’s left and turn it into something beautiful.

You’ve seen him do it in other’s lives. You’ve seen the rags to riches stories. The radical transformations from hopeless to happiness. The restoration of families. The healing of a body. The breakthrough in a dream about to go out. You’ve seen it … you know it CAN happen … and yet you question if God would ever do it for you.

Why? Why have you discounted yourself from restoration? Why would you ever question that exactly who you are, is who God has chosen to do his greatest work in?

Don’t you think he can fit together these broken pieces? Don’t you believe he can restore what has been lost? Don’t you know he can rebuild all of this? This is his specialty. He is a restorer. He is a redeemer. And he is YOUR restorer. YOUR redeemer, here to do a personal work in your life. Now.

Isaiah 51:3 says “The LORD will surely comfort Zion and will look with compassion on all her ruins; he will make her deserts like Eden, her wastelands like the garden of the LORD. Joy and gladness will be found in her, thanksgiving and the sound of singing.”

Zion was a hill in Jerusalem. The hill on which a battle had taken place. Much like our lives … where a battle has taken place. Where we have fought and sometimes lost. Where war has been waged and we have sometimes fallen short. Where dreams have fallen apart, progress has been stolen, and hope has been threatened. And this hill, Zion, became a fortress and stronghold representing the kingdom of God.

God looked upon the ruins of Zion, what had been destroyed and what was left, and he had COMPASSION. Those same eyes of compassion look upon you today. God sees what you have lost. He sees where you are hurting. He knows your disappointment. He hears your cries. And he is moved with compassion.

His eyes of compassion prompt a work in your life that bring back joy and happiness. Let him see your ruins. Let him see what you once dreamed of that has fallen apart. Invite your mighty God into your messy devastation and watch him revive it!

In the hands of our God, nothing is wasted. He is not here to condemn you for your failure, he is here to give you hope despite your failure. You know in Isaiah 43:19 where God says “Behold, I am about to do something new; even now it is coming … Indeed, I will make a way in the wilderness and streams in the desert.” … yeah, that’s what’s happening here!

God is about to do something new in your old ruins. It’s not too late. You’re not too far gone. There is hope, hope beyond anything you ever imagined. He is making a way now. He is creating something big and beautiful out of these broken pieces. He is taking your ashes from hopes and dreams that went up in smoke and he is giving you something beautiful. Open up your hands and receive it.

Ezekiel 36:35 says “Then they will say, “This land that was desolate has become like the garden of Eden. The cities that were once ruined, desolate, and destroyed are now fortified and inhabited.”

Don’t you see, this is about your life too. The areas of your life which represent a failure and disappointment, the ruins of what once was, they are being rebuilt, fortified, to be inhabited. Inhabited, meaning full of life. You’re about to inhabit the very things you were about to give up hope on. Oh don’t you know he is restoring you. He is rebuilding your ruins. In the hands of God this is the most beautiful material for his masterpiece … your ruins.

And his masterpiece … it’s you. It’s your life to the fullest. It’s you living up to your potential as the woman he always envisioned you being. That’s what he is building. And he does it in the ruins. He does it with his compassion, not his condemnation. Where you only see wreckage, he sees a wonderful future. Where you see devastation, he sees healing, he sees strength, he sees potential because his promise will be fulfilled.

JOY AND GLADNESS WILL BE FOUND IN HER.

Now, what do you need to do? Open your eyes to what he is doing in your life and fully surrender. Make yourself available to the process. Move your excuses out of the way of his progress. Girl, get out of the way … God is building something in your life! God has a project … you’re at the center of it.