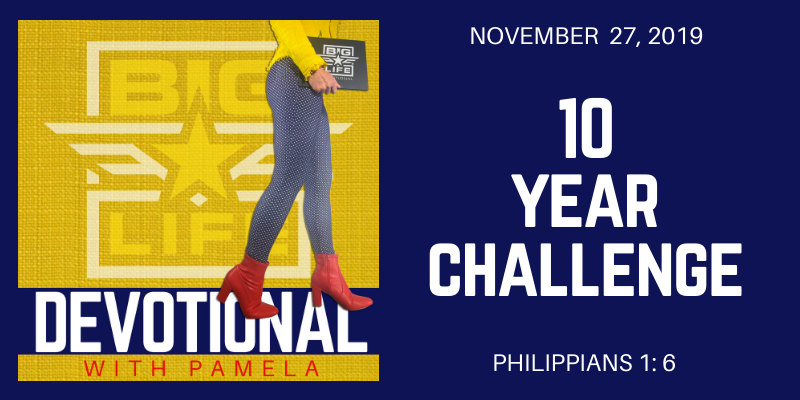 Have you seen it going around on Facebook? The 10 year challenge. Post a photo of you today compared to a photo of you from 10 years ago. Sounds scary because, girl, you’ve gotten older! However, have you noticed what I’ve noticed? Everyone looks remarkably better today at 10 years older! What?!!!!! Ya’ll we’re getting better with age! We’re basically fine wine and cheese with our aging process making us better.

Stop and think about it … are you getting better? How far have you come in the past 10 years? You’re not who you once were!

This is all a result of God’s work in you. He’s refining you. How? Through the fires!

It wasn’t an easy, comfortable life where every step was known in advance and every turn was well marked that brought you here. No, it was the stumbles. It was the hardships. It was the season where there was a lot more month left at the end of your paycheck. The money ran out ya’ll! Like digging for change kinda broke! Remember those times … or maybe you’re still in them. It was the season of crying yourself to sleep asking why this was happening to you. It was the season of long days and little progress.

And today you’re better because you’ve been refined. You’ve been stripped of the crap that didn’t matter. How many of us know that’s not a fun process, being stripped of the crap that doesn’t matter. You don’t magically wake up one day in the middle of bliss and realize what’s important. No, that realization only comes in a time of hardship where you were forced to let go of the extra because it took both hands to cling to what was crucial. My friend Ashlee just lost her home in a fire. She walked out with her family. The day before the fire she would have told you her cars were of tremendous value. The next day as they all smelled like smoke and the cars had gone up in flames while sitting in the garage, she held what was of true value. Refined by the fire … literally.

10 years ago our family was held to the flame and felt the heat. We were battling to keep our daughters. After having them in our home for 4 years, the finalization of the adoption through Mexico was threatened and we spent a Thanksgiving in hiding with them. Hiding just to keep them. Hiding to buy time and more attorneys. Do you know how we afforded those attorneys? We sold everything. Everything. Our dining room table, the fancy bedroom furniture, our son’s little motorcycle, the basketball goal in the front yard. The truck was for sale. We were begging for someone to come and take all the “stuff” we had worked so hard to buy. Why? Because we were holding on to what was most valuable with both hands.

Our family was refined by that fire. Two little girls who were once abandoned by everyone they knew, were now witnessing a family and circle of friends fighting with everything they had to save them. Those girls are now all grown up, and they still know they were fought for. They still know this family will do anything to save them. And now, with the 10 year perspective, in our next battle for one of our daughters, we understand the value of the fires we went through and the power of God, love and family. Because of the refining, I can wake up in the middle of chaos and KNOW my God is still working.

Once again, God wastes nothing. What you went through 10 years ago is being used today. The lessons you learned and the fires you were threatened by then continue to serve their purpose in your life now. Don’t forget what you’ve gone through. Never forget where you’ve come from. God has been faithful, and he will continue to be faithful.

Philippians 1:6 “Be confident of this, he who began a good work in you will carry it on to completion until the day of Christ Jesus.” Yes sister, find your confidence right here … God began something good in you and he’s using everything in your life to work the good plan he has for you. Even the bad. Especially the bad. God’s finest works are in the middle of the fire. It is in the fire that he stands beside you and proves he will never leave or forsake you.

Remember the story of Shadrach, Meschach, and Abednego in Daniel chapter 6. The 3 brave boys who refused to bow to the kings golden statue and were therefore thrown in a fiery furnace. That’s what you call a bad day. I bet you’ve had yourself a few of those bad days in your life, haven’t you? When you did right, but it still went wrong. When what happened wasn’t fair, but it happened anyway. When you looked around and couldn’t believe the mess you found yourself in and certainly couldn’t see your way out of it. Oh yes, the fiery furnaces of life.

And remember what happened when the King looked into the furnace? He saw 4 in the fire, not 3, and he knew the God of Shadrach, Meschach, and Abednego was real. They remained faithful and their God went right in the fire with them, standing right by their side, then they walked right out, unsinged by the chaos that was around them. They were saved from their fire, and the King was forever changed by their fire.

I wonder who is being changed by your fire. They’re not in the fire with you, but they’re watching you remain faithful in the middle of it. They see you. Honey you don’t even realize the impact you’re having as you struggle. Keep struggling with faith because your faith in the middle of this fire is making a difference. You’re not walking through this alone. God is near. He is with you. He will not leave you in this.

Another 10 years from now, Lord willing, you’ll be better because of this. You’ll be more refined and more like the woman you were created to be. Why? Because the heat from this fire melted away all that crap you were once holding on to that didn’t really matter. This is all part of the process of God continuing to work his good plan in you.

This gives me great confidence in my current fires. And it gives me confidence in the fires of those I love. God is using all of this to refine them. They may be building a big ol’ bonfire in their own lives, burning up everything we see as valuable, but God is working in the middle of that fire. Bring on the heat … he’s right there in the middle of it all doing something life changing. And what he’s doing will impact much more than just one life, it will impact many for the cause of Jesus Christ. Generations will be changed by today’s fires.

Did you get that? GENERATIONS will be changed by the fire you’re in right now. This is bigger than just you. God is not only working his good in your life, but in the lives of generations to come, and he’s doing it through your fire.

Be confident today. If you’re better today than you were 10 years ago, don’t forget it was because you’ve been refined. Refining only comes through the fire. And don’t resent the refining of today because honey, you’re going to be even better in 10 more years!

By Lonnie|November 27th, 2019|Categories: Devotionals, Podcast|Comments Off on 477 10 Year Challenge