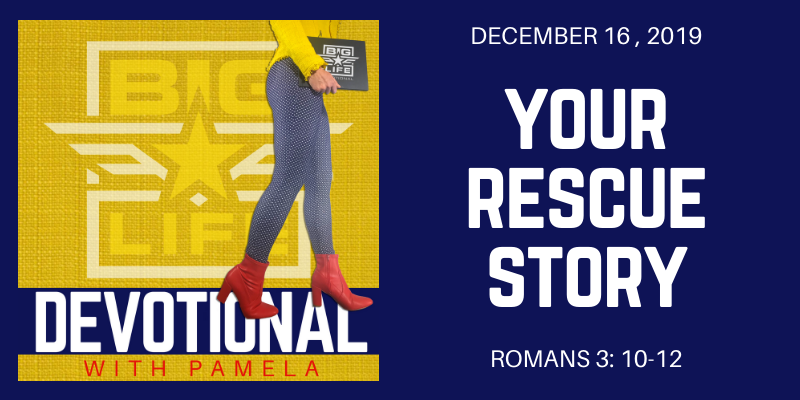 You have a rescue story. A story of what could have been, but you were miraculously rescued from it. A story of a path you were on, then an intersection that changed everything. A story of despair, now exchanged for a story of hope. This is your rescue story.

Some mornings I wake up with a song stuck in my head, singing it over and over again. Typically that’s how I know the direction for the devotional. And it’s funny, I typically don’t get it for the first 30 minutes of the morning while the same lyrics run through my head. Then it’s like a lightbulb moment …. Oh, that’s what you want me to talk about today … I gotcha God!

So, what did I wake up singing this morning? Zach William’s ‘Rescue Story’.

We all have a rescue story. A story of what God saved us from.

Some of us know the story because we came dangerously close to the other side of it. We danced with the devil. We battled in the darkness. We hid in shame. We watched life crumble and we stood in the wreckage. Today when we look back, we have no doubt God swooped in and straight up rescued us.

Those are the people I like to stand next to in Church. You know why? Because they KNOW they owe everything to Jesus, and they hold nothing back. They have a full surrender to God because they remember that stripped down place where they were nothing without him. Their rescue story is written all over them! And when someone knows they have been rescued, they live with a gratitude for freedom like none other.

And then there’s people like me. People who have no tattoos to tell the story. No apparent scars from the struggle. No poignant moment where Jesus and his angels held back the demons of hell in the battle over me. There’s no clearly marked path of destruction I’ve ever wandered my way down, in desperate need of a rescue or I would never come back. So, what’s my rescue story?

Is that you too? The girl without a real rescue story?

Let me speak to the fairly successful, pretty well put together, 90% of the time goody goody. (Hey, I can say that because that’s the class I would typically fit in, so hold the hate mail.) Are you listening my fellow goody goody?

YOU HAVE NO IDEA WHAT GOD HAS SAVED YOU FROM!

Romans 3:10-12 puts us back in our rightful place “None is righteous, no, not one. No one understands, no one seeks for God. All have turned aside; together they have become worthless and no one does good.”

Your wayward path may look like more like mine … the path that says “hey I’ve got this, I can do it on my own.” The path that tells us we’ve got what it takes and we forget that actually, NO YOU DON’T GIRL … YOU ARE NOTHING WITHOUT GOD. The path with countless accolades that tells you you’ve earned this with your hard work, good looks and raw talent. Girl, sit down! It could all be stripped away today, then what? You’re entitled to nothing. Everything you have came first through the hands of God.

Remember that time when you stumbled and you struggled? Remember when your path to success had a roadblock and you got all frustrated in your delay, blaming people for holding you back and being all jealous of you? Ahhhhhh, want to know what REALLY may have been happening? Your rescue story.

You may have been going 100 miles per hour on a collision course with disaster, but it sure looked like success. It looked like everything you ever wanted it to be, then everything came to a screeching halt while you spun your wheels suddenly going nowhere. Yip, my sister, that’s a rescue story. Rescued from what you never even saw coming.

We humans struggle with success. We create messes in our wake. Look at the story of David. God took him from shepard boy to mighty king. He was highly favored and wildly successful. For decades he experienced nothing but success. He was powerful and his power then caused him to be puffed up. Remember the story as he looked across the rooftops and saw a beautiful woman bathing? Her name was Bathsheba and although he wanted her, she was married. He slept with her, got her pregnant, then sent her husband to the front lines of battle to intentionally have him killed.

He became an adulterer and a murder, all on his happy path of success. Gosh, I bet he didn’t see that coming. He was just enjoying his promotion from the pasture to the palace, his rise from a nobody to a somebody, and look where he went.

I’m grateful for this story because it reminds me I need to be humbled. Without God’s continual slow of my roll, and closing a few doors along the way, my own success may just take me somewhere I never want to be. I’m humbled to imagine where I could be today without God. What I could have done without his intervention. The mess I could have made if he would have just let me keep going at my own pace.

That’s a rescue story. A story of being rescued from something we don’t even know about. Shouldn’t we too worship with full surrender and deep gratitude for where our life could have ended up, even should have ended up, if it weren’t for Jesus? My fellow Goody Goodies, we owe God a great big praise!

He’s been fighting our battles for us. Some of us just never saw the battles. There was still a battle for you and for the future God has planned for you. You have been rescued my sister. We all have. Maybe your beauty came from ashes you never held in burned hands. Maybe you were called out of the desert before your feet ever hit the sand. Maybe you were rescued before you ever saw danger. Isn’t that all the more reason to praise him?

Oh God, thank you for rescuing me. From all I see and all I have never seen. From the mess I created, and the mess I was my way to without even knowing it. Where would I be without you Jesus?

By Lonnie|December 16th, 2019|Categories: Devotionals, Podcast|Comments Off on 490 Your Rescue Story