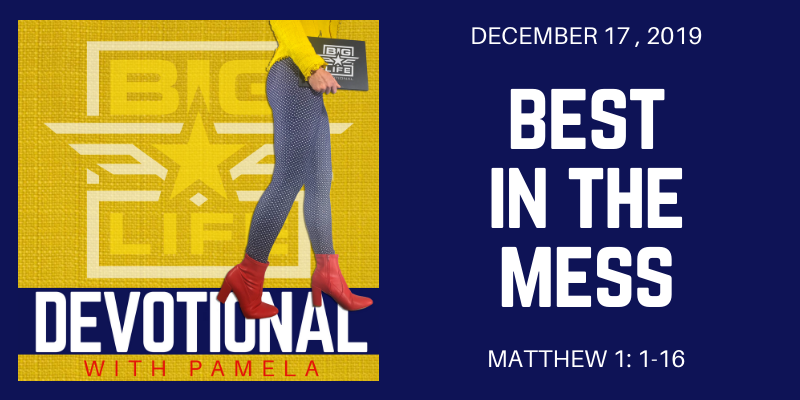 God can use anybody. Anybody can be used by God to show his power, to prove his majesty, to fulfill his divine plan. You with your past failures, your current problems, your list of what you can’t do or don’t have, your limitations, your insecurities and fears … all of these things are tools for great works in the hands of God. You haven’t dismissed yourself from what God wants to do, you’ve given him something to work with. In the middle of your impossible is where God does his finest work. Why? Because this is where you KNOW it was God!

Your life has been primed for his work. Could this be why you’ve gone through all you’ve gone through? Could this be the purpose behind the pain and the message out of the mess? Because God wants to use you? Yes, ding ding ding … Johnny, what does she win? You win a future filled with hope. But wait, there’s more you also get a destiny designed by your creator and a story only you can tell!

We’ve seen it throughout scripture, God can (and will) use anybody. Saul, the wild man on a mission to kill the followers of Christ was forever changed by God, given the new name of Paul, then used to write the majority of the new testament we read today. God could have chosen anybody, but he chose the guy with the past. He chose the guy who had gone down the wrong path for years. He chose him, and he used him.

Honey, your past does not dismiss you from God’s plan for you.

Moses had a speech impediment. He wasn’t “normal”. He stuttered. And God chose this man who couldn’t speak well to stand up to Pharaoh and say “LET MY PEOPLE GO!” He used him to lead an entire nation out of captivity. He used him to part the Red Sea and save thousands. God could have chosen anybody, but he chose the one with a handicap and insecurity. He chose him, and he used him.

My sister, your insecurity with what may be wrong with you does not disqualify you from God’s mighty power working in you.

Have you ever thought about the women God chose to create the lineage of His son Jesus? Women who would be part of the generations passing down their blood, their customs, their children, to become the Earthly heritage of the Almighty.

Check it out, it’s kind of a boring read in Matthew 1: 1-16, but dig deeper into the names and it’s like a soap opera! Out of all the women in the world at that time, why did God choose who he chose? Why did he work through these situations? When God could have chosen anyone and done anything, why did he choose this way?

Could it be to remind you, over 2000 years later, that he can use anybody … and he has chosen YOU.

Of course we know God chose Mary. The young unwed girl who’s sudden pregnancy would cause immediate shame and condemnation. Why wouldn’t he have chosen an experienced 30 year old mother? Someone who wouldn’t have been criticized and outcast by pregnancy? Why couldn’t he have at least waited until Mary’s wedding day even? He could have, but he didn’t.

May it be a reminder to us today that God can work through any shame, any criticism, any unfortunate situation or untimely circumstances. What if God is working like this right now in your life? I don’t mean a virgin birth, I mean that untimely inconvenience you’re dealing with right now. The very thing you can’t believe is happening NOW. In your mind this could have been timed so much better, but the fact that it’s happening right now has you all stressed out. Oh girl, God’s timing is perfect and he knows exactly what he is doing! Let him use you in THIS time.

Go back a few more generations in the lineage of Jesus and what you’ll find are a whole lot of messed up women with past mistakes and histories of guilt and shame, yet they were the ones God chose and their names are listed in scripture forever.

Bathsheba. We talked about her yesterday. You can always remember her as Bathsheba in the bath. She was so beautiful and irresistible that King David wanted her although she was married. Bathsheba made a mistake. She slept with the powerful king. That bad decision led to two things: 1) Her husband was killed and 2) She got pregnant with the King’s baby.

And God, in his amazing ways says, ‘this is a big ol’ mess … girl, what were you thinking? Here, let me use this!’ And you know how he used it? More bad. The baby became sick and died. But God wasn’t finished yet. Bathsheba and David would have another son and his name would be Solomon. And then 26 generations after Solomon would come Jesus! This is what God used!

What is God clearly saying to you now? My daughter, your mistake has not dismissed you from my great plan for you. I can use this.

Rahab the prostitute is also listed in the lineage of Jesus. Yes, a woman who’s very profession was sinful was hand selected by God to be part of the family of Jesus. Why? So that today you could see who you were does not limit how God will use you now.

What have you lost? God wants to use it now. He wants to restore you and use every ounce of pain to bring about something inexplicably good in your future.

God wastes nothing. Remember, it was Jesus who miraculously fed the 5,000 with 5 loaves of bread and 2 fish, then said in John 6:12 “Gather the pieces that are left over. Let nothing be wasted.'” Jesus is now gathering the pieces left over in your life so that nothing will be wasted. Gathering the pieces left from bad decisions and wrong choices. The pieces left from a hard childhood, a bad marriage, an addiction, a loss, or a struggle. The pieces of your life left after ‘life happened’ and Jesus says LET NOTHING BE WASTED.

Why? Because he can use it. Because God can use YOU. His plan is to use you, wasting nothing you’ve ever gone through, and let it all become something used for good.

This is how God works. Look at the very women he used to bring us the One who would save us? A prostitute, an adulteress, a widow, a girl in a shameful situation … this is where God CHOSE to work.

And all we have to do is say YES GOD, HERE I AM. WORK IN ME! Do your best in this mess.

By Lonnie|December 17th, 2019|Categories: Devotionals, Podcast|Comments Off on 491 Best in the Mess