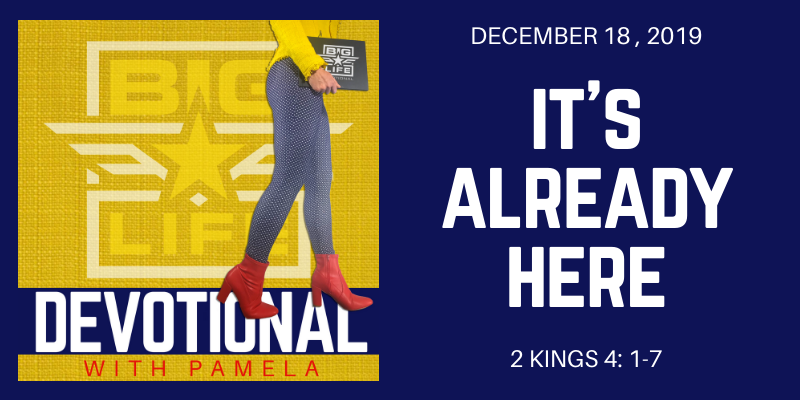 What do you have today my sister? Understand that is exactly what God wants to use. Understand the solution to your problem lies in what you already have.

2 Kings chapter 4 begins with a story titled ‘Elisha Helps a Poor Widow’. Within this story is something for you today. Let’s read together starting in verse 1 through 7.

One day the widow of a member of the group of prophets came to Elisha and cried out, “My husband who served you is dead, and you know how he feared the Lord. But now a creditor has come, threatening to take my two sons as slaves.”

“What can I do to help you?” Elisha asked. “Tell me, what do you have in the house?”

“Nothing at all, except a flask of olive oil,” she replied.

And Elisha said, “Borrow as many empty jars as you can from your friends and neighbors. 4 Then go into your house with your sons and shut the door behind you. Pour olive oil from your flask into the jars, setting each one aside when it is filled.”

So she did as she was told. Her sons kept bringing jars to her, and she filled one after another. 6 Soon every container was full to the brim!

“Bring me another jar,” she said to one of her sons.

“There aren’t any more!” he told her. And then the olive oil stopped flowing.

When she told the man of God what had happened, he said to her, “Now sell the olive oil and pay your debts, and you and your sons can live on what is left over.”

This woman had lost her husband and she had no way to pay her bills. The bank showed up at the door and wanted their money. She had nothing to give. So the bank threatened to take her 2 sons as slaves. Now maybe you’re facing some debt collectors, but I bet they’re not threatening to turn your children into slaves to pay your debt now are they? Remember, I understand coming up short on money. There was a time we parked our car in the garage so the repo man couldn’t come take it. There was a time when we ate shrimp ramen and called it a seafood feast. We’ve had our share of hard times. So please know if you’re listening and you’re connecting with this woman who was in a desperate financial situation, I get you. Been there, done that, survived it and learned some of the most valuable lessons of my life.

So Elisha, the pastor, shows up to her house, she tells him her sob story and he says “what can I do to help you?” Now without giving her an opportunity to give a long list of all her needs and wants he says “Tell me, what do you have in the house?”

Now listen to me, this is exactly what God is asking you and I today. So you have a need … I want to help you … tell me, what do you already have?

God wants to use what little you have to create your answer. What you have today is the seed of tomorrow’s harvest. Be faithful with the seed and the harvest will be abundant. Neglect the seed of today and tomorrow you have even less.

Elisha showed up and changed her life without bringing her a single dollar. He didn’t give her anything. All he did was show her what she already had. Oh you have a little bit of olive oil. Okay, let’s focus on what you DO have. It may only be a little bit, but God can do something with your little bit.

WHAT DO YOU HAVE TODAY? What do you have right now? That’s exactly what God wants to use to meet your needs. Nothing from outside is even needed. You already have it. If you will be faithful with what you have right now, God will begin multiplying. In the beginning God created, then he never had to create again. Why? Because the seed was in the creation. He created one oak tree, then that tree would multiply from it’s own seed. He created one man and one woman and gave them the ability to multiply. Within you and in your hands at this moment is everything needed to create so much more.

Honey, you don’t need God to magically create something that doesn’t already exist, you need him to open your eyes to what you already have, who you already are, and what you can already do.

So what does Elisha say about this little bit of olive oil she has? He says go out and gather as many empty jars as you can. Then bring those empty jars back into your house and start filling them with olive oil. Every single jar was filled. Now understand, she only started with a little olive oil. It shouldn’t have even filled 2 jars. But what she had kept supplying and giving and they kept filling the jars until every single one they collected was filled.

That oil was worth enough money to pay her debts. Her answer was in what she already had.

If you will take what little you have and do just two things with it, IT TOO WILL BE ENOUGH. What are the two things? Be faithful with it, and have faith in the God who gave it to you.

In the beginning the widow thought she had nothing. You may think you have nothing right now. And maybe it’s not about money, maybe it’s about connections or resources, time or energy, or patience. If you focus on what you DON’T have then that’s all you will ever have … not enough. But if you will use what you do have faithfully, with faith, God will multiply it.

Have you ever been running low on gas without money to buy more gas? Have you ever noticed how far you can make that last 1/4 tank of gas go? Why is that? Because you’re focused on what you DO have and you are faithful with every second that car is running, intentionally making it count for what’s most important.

My mom tells a story of a time over 40 years ago, before I was born when it was just her and my dad and brother. My dad worked for a farmer who had left town without giving them their monthly paycheck. They had gone through all their meat and all their vegetables, and all they had left was an apple tree in the yard. Mom used those fresh apples to cook 3 meals a day, until one day she made apple crisp with no apples because they had picked every last one off the tree. That was the day Dad’s boss came back into town and gave them their overdue paycheck. Mom was faithful doing what she could with what she had, and God was faithful to provide just enough.