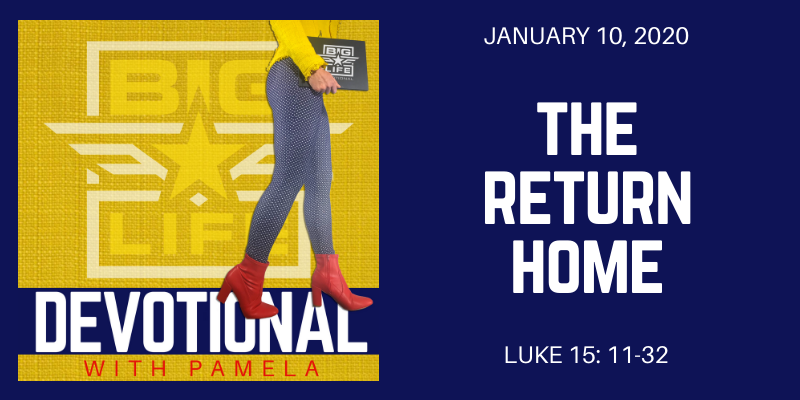 Yesterday morning I led the 12 women here for the BIG Life Goal Setting Retreat on a walk on the island. The sun was shining, the beach was practically all ours and we set our sights to the west and we started walking. We reached the tip of the island and turned around. And that’s when it hit us. This head wind so strong you had to lean into it.

When did this happen? We didn’t even notice the wind when it was at our back, but the moment we turned around and started in the direction of home, boom RESISTANCE.

What does resistance in life mean? What does it mean when we have to push so hard to make any progress at all, when going the other way seemed so much easier? It means we’re going home.

Jesus shows us exactly how through a story found in Luke 15: 11-32. The story of the Prodigal Son. You likely remember the story, but perhaps missed the most powerful sentence in it all.

“There was a man who had two sons. The younger one said to his father, ‘Father, give me my share of the estate.’ So he divided his property between them.
“Not long after that, the younger son got together all he had, set off for a distant country and there squandered his wealth in wild living. After he had spent everything, there was a severe famine in that whole country, and he began to be in need. So he went and hired himself out to a citizen of that country, who sent him to his fields to feed pigs. He longed to fill his stomach with the pods that the pigs were eating, but no one gave him anything.
“When he came to his senses, he said, ‘How many of my father’s hired servants have food to spare, and here I am starving to death! I will set out and go back to my father and say to him: Father, I have sinned against heaven and against you. I am no longer worthy to be called your son; make me like one of your hired servants.’ So he got up and went to his father.

Just like it’s darn easy for us to walk away from who we were created to be and stumble into being a woman who is stressed, worried, unhealthy, and unbalanced. It’s easy because the wind is at our back and we just keep going and going and going.

There’s zero resistance going with the wind. And guess what, if we just go with the wind, we will often get ourselves in trouble. The boat we talked about yesterday will end up shipwrecked on some distant shore if we just go with the wind. And that’s where some of us are … shipwrecked. Waking up in a life we don’t love and a body we may not even recognize. We have become someone we were never created to be. And it was all so easy. It’s easy to get to this point.

It’s easy for the house to become a mess, right? You don’t even have to work at the mess, it just naturally piles up. Most of us don’t have to work at gaining weight, our thighs just naturally expand real darn well on their own. We typically don’t have to try real hard to spend money, it’s almost like it spends itself and we don’t even know where it goes. I’ve never seen a single marriage just easily stroll right into a state of pure bliss. Nope, that happiness crap takes serious work. Here at retreat, Lisa, who has been married nearly 30 years, shared about the hard work of marriage, and the hard work it continues to require. She said “you think the 7 year itch was bad, honey that was a tickle.”

Every ounce of goodness in your life right now is under attack. It’s full on resistance and 30 mile per hour winds to move in the right direction. If it’s easy, then maybe look around and check your direction … you might not be going where you thought you were going.

Easy living is heading straight for disaster. Unless you’re the retired sailor we saw lounging on his sailboat yesterday in the Hilton Head Island harbor. His life looked pretty dang easy … but my guess is he had about 70 years of hard work and resistance to get him there. And as a sailor, he learned how to harness the wind and resistance to go in an intentional direction, otherwise his boat would have never made it back to the harbor.

So the prodigal son had wandered off into a mess. Here he was having wasted all his money and built up a load of regret, now trying to share food with the pigs. And it was here, down in the pits of life and the reality he had created that he made a drastic turn. In Luke 15:17 using the the King James version it says “when he came to himself …”

When he came to himself. Do you understand what this means? It means when he returned to his true identity. When he stopped what he was doing for long enough to realize how he was living didn’t align with who he was truly was. He came to himself. Then he changed his direction and headed home. On the way back the resistance must have been strong. He had to push hard to return home. It was easy to wander away, and oh so hard to come back.

Will it be easy? No. Understand that now. The wind will be at your face and you will have to lean in hard. My hips are literally sore this morning from the hard walk back home yesterday morning. It took hardly no effort to walk out to the tip of the island with the wind at my back. It was easy. But walking back … that was hard. It required my best effort. And honestly there were times I wanted to quit. But to get back home, I knew I couldn’t quit.

There will be times on your journey back to your true and best self that you will want to quit. Your hips may hurt from the push. Your best effort will be required here this year. But my sweet sister, if you ever want to come back to your true, authentic, best self, you must keep going. And remember, because it’s good it will be under attack. There will be resistance. This resistance has caused you to quit in the past. But will you decide right here and right now, you won’t give up this time.

Repeat after me: I won’t give up on myself.

The prodigal son’s journey home must have been hard because he sure had wandered far from who he really was. But he returned, just as you can return.

James 4:7 says “Submit yourselves therefore to God. Resist the devil, and he will flee from you.”

Submit your life and your journey fully to God and resist the devil. Resist the easy way because the easy way is that wide gate and crowded path that leads to destruction we were warned about. Most of this world is seeking easy today. And it is the ease that leads to a life far less than we were created for. Turn back home and submit to God. He has better plans for you.

Lean into his plans for you and head in the right direction. Yes, the direction of resistance where it’s a whole lot harder. Yes, the little gate that’s harder to find and the path that few are on. This is the way for you. Come back home to who you really are.

And of course, we remember how the story ends. Jesus says the Father was waiting for the son, expecting him. He had been anxiously anticipating his return. And when he saw him, he ran to him and welcomed his beloved son home.

Jesus tells us this story so we know we can always come home. God is still waiting on us to come back to his original plan and best offerings for us. He’s not only waiting, he’s anxiously anticipating our return. His welcoming arms will wrap you up and say “my sweet precious daughter, let’s get you back home and make sure you always remember who you really are.”

Your journey home can start today. Back to who you were created to be and back to the life your loving creator had in mind for you from the beginning. And for some you’ve been on this journey for a while now, but the resistance is wearing you the heck out. Keep leaning in and just take the next step today. If you don’t give up on yourself, you will get there, and it will be worth it.

By Lonnie|January 10th, 2020|Categories: Devotionals, Podcast|Comments Off on 508 The Return Home