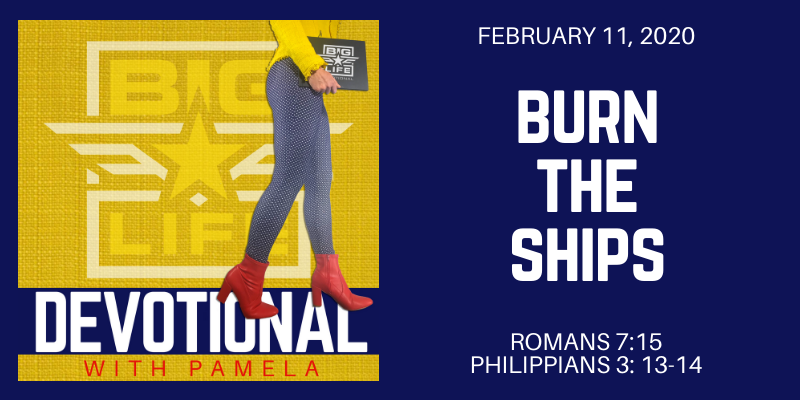 In the 1500’s Captain Cortes led a fleet of ships to a new world for discovery. Upon arrival, he commanded his men to burn the ships. Yes, destroy that which brought you here and the only thing which could take you back to where you came from. BURN THE SHIPS, and once you do, there’s no turning back.

It was the ultimate act of commitment. We are here and we’re here to stay.

How many of us know the comfort and familiarity of our old lives can sometimes lure us back? No matter how good we’re doing now, if the way back is available, sometimes we’ll crawl back on that old ship and return to familiar home shores, even if they were miserable. We need a Captain Cortes up in here who says “NO GIRL, WE’RE BURNING THE SHIPS! YOU’RE NOT GOING BACK!”

Well, guess what girls, we’re in luck, we have someone better than Captain Cortes, we have Captain Jesus. He will not only burn the ships, he will walk on the water. At his command the winds and the waves obey him. If he says we’re not going back, then girl, we’re not going back.

The truth is, there are things we would change in our lives, but we’re not willing to even start this time because we fear we would just turn back. We lack the confidence in our willpower to follow through. We are afraid of a little progress, then a lot of backslide. One step forward, then two steps back, and the dizzing dance has us not even willing to try again.

We’ve taken that bold stance before, declaring this is it, we’re changing and we’re never going back to the old ways … then what happened? Shamefully we did return. We slipped right back into old habits and patterns and maybe today we find ourselves no better off than we ever were. The effort feels exhausting, and useless. We’re just like Paul in Romans 7:15 when he says ” I do not understand what I do. For what I want to do I do not do, but what I hate I do.”

BURN THE SHIPS AND PRESS ON

Paul also writes in Philippians 3: 13-14, “Forgetting what is behind and straining toward what is ahead, I press on toward the goal to win the prize for which God has called me…”

God has a big beautiful life available to you, but the ship you arrived on will only take you back to where you came from. Forget what is behind you sister. Burn that ship. Don’t let it take you back. Step into a new day on this new shore and explore what God has for you here. Press on sister. No turning back.

If you follow the BIG Life Mornings playlist on Spotify, you’ll quickly find a large number of my favorite songs are by For King and Country. One of their best is called “Burn the Ships” … and yes, that song played this morning.

We’ve got to
Burn the ships, cut the ties
Send a flare into the night
Say a prayer, turn the tide
Dry your tears and wave goodbye
Step into a new day
We can rise up from the dust and walk away
We can dance upon our heartache, yeah
So light a match, leave the past, burn the ships
And don’t you look back

Now, let’s put action to this. It can’t just be a warm fuzzy feeling imagining God giving us this new beginning. It must be more. Warm fuzzies don’t last. Struggles and temptations soon return, and that’s just the truth of it. Whew, I’m gonna be healthy and lose this extra 60 pounds, just watch me I’m doing it this time for reals ya’ll! I’m inspired with my warm fuzzies and I know God is going to strengthen me! 2 hours later, oh dang those brownies smell good, just one bit won’t hurt. 4 hours later (as Spongebob would say), oh dang I ate the whole pan didn’t I? Crap! I’m right back where I started and this time I have the weight of shame and regret.

Nothing will leave you stuck back on the shore of where you came from worse than shame and regret.

That’s a work of the enemy. God says there is no condemnation in Christ Jesus. God says there’s always a way back, he is never giving up on you and it’s not too late. The enemy says you’re a miserable failure and you’ve proven it again. You should be ashamed, look at yourself.

Who will you listen to today? The creator of the universe who says he’s made a way specifically for you and you’re right on time … or the jealous fallen one who has already been defeated, who tries to pull you down to his miserable state to dwell in shame and regret?

The way to shut the enemy us is BURN THE SHIPS. The ships are the vessels of returning to old habits and old ways and this is where the enemy resides. BURN IT!
How? Make it impossible to do it again.

If the brownies are the temptation, throw the dang brownies away … NOW. You won’t be eating them when they went down the garbage disposal. Notice I said garbage disposal, because some of us ain’t above eating off the top of the trash can in a moment of weakness.

If the bottle in the cabinet has been your method for coping and you know that’s not healthy, POUR IT OUT … NOW. Yes, now. Just pour it out. You say, “Pamela, do you know how much that bottle of alcohol cost?” No, maybe I don’t, but I know you’re worth more! Your family is worth more. Burn that ship and get to pouring sister. Down the sink it goes.

There’s more to the story behind this song “Burn the Ships”. The song writer, Luke, shares the story of his wife being pregnant with their 2nd baby and she suffered from extreme nausea. The doctor prescribed her pills to help with the sickness, and they worked great for a few weeks, then the sickness returned. She went back to the doctor and they increased her prescription. The time came when she was fully addicted to the pills and she knew she was in trouble. She called her husband to come home from work and they went to the hospital for help. When they returned home, she saw the pills again and she knew she never wanted to go back and there was only one thing to do … flush the pills.

In the lyrics of the song it says:

So long to shame, walk through the sorrow
Out of the fire into tomorrow
So flush the pills, face the fear
Feel the wave disappear
We’re comin’ clear, we’re born again
Our hopeful lungs can breathe again
Oh, we can breathe again

Some of us need to flush the pills. We’re not drug addicts, but we’ve become fully dependent upon a pill that was never meant to rule us. We’re using and abusing those pills and we hide in shame wondering how this could have ever happened to us. Call your doctor and get help, and if all your doctor wants to do is prescribe you pills, then honey, let’s find a better doctor.

Some of us need to pour out the bottle in the kitchen cabinet and declare NO MORE.

Some of us need to go through the pantry and trash the crap we’ve been using to sabotage our bodies. It simply doesn’t need to be in our homes for one more day!

Some of us need to put an end to the relationship we know isn’t right. We need to delete the number, block the contact, burn that ship right now. Just end it.

This is what our God does. Captain Jesus says come on sister, we’ve got some ships to burn! Don’t count on the fuzzy feelings of this moment to carry you through. Take action. Do what you know needs to be done to live the life God has available to you now.

By Lonnie|February 11th, 2020|Categories: Devotionals, Podcast|Comments Off on 530 Burn the Ships