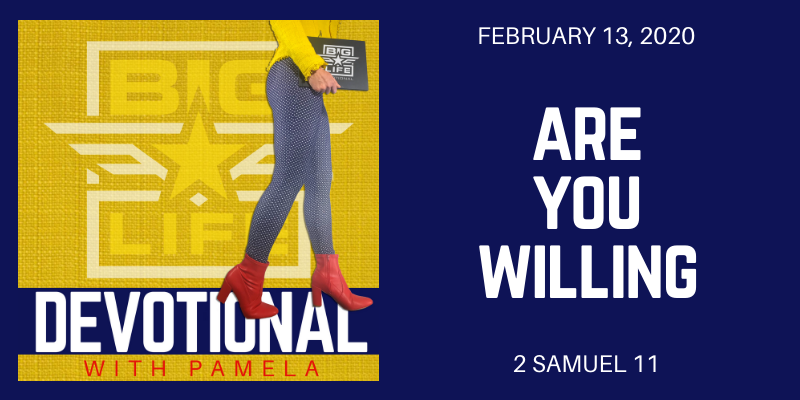 We miss the opportunity of a lifetime.

You have no idea what God has in mind for you if you would follow him fully. But we miss it because we’ve settled, we’re comfortable and we avoid the unknown. Here’s the kicker, we not only miss the opportunities God has for us, but we create an opportunity for disaster in our life. Our delay of obedience is an opportunity for the enemy to stir up trouble, and we all know the enemy is eager do some stirring in our lives!

That willingness in you that God so loves has grown a little dim, hasn’t it? You’re now too busy. There’s too much stress and pressure in your real life to listen to God’s prompting and just go. Our attitude of “choose me God, I will go” has turned into a “oh, please not me, I’m so busy.” Or even, “no thanks God, I’m pretty happy with what I have now, I’ll just stay here.”

We hunker low, hoping God will skim right over us and choose someone else for the work he has. But perhaps this is what we have forgotten – our willingness to go creates an undeniable favor over our lives and supernatural provision. Our UNwillingness to go leaves the door open for the enemy to creep in and do his nasty stirring.

I know where you are may be comfortable. I know you may be real busy. But if God is calling you to more, you can’t afford to ignore it.

Is that you this morning? You once had so much passion in you. You woke up at the first sound of the alarm ready to conquer the day … and now … not so much. You were once excited and seeking what God had in store for you, now you’re hoping he’s about wrapped up his business with you. You’re settled right where you are.

You’ve gotten lazy and lax. Oh we can layer it with all kinds of flowery excuses that the outside world will buy, but deep down you know it’s still just an excuse of why you’re not doing what you know you should be doing.

Sadly, we can get by on half effort. We can survive, eat and pay the bills just going through the motions. But are there dangers in not going where you’re supposed to go and not doing what you’re supposed to be doing? Oh you bet there are.

King David was supposed to be out with his men, the Israelite army, BUT DAVID REMAINED IN JERUSALEM. He didn’t go. He stayed. He wasn’t where he was supposed to be. And when we don’t go where we are supposed to go, we put ourselves in some dangerous positions.

When you lose your willingness to go, it will create a huge mess in your life.

I had envisioned immediate success once we moved. Isn’t that the way God works? Your willingness is immediately met with luxury and riches.

Wow, I was wrong. Our willingness to go was met with hardship and rejection. Rebuilding our business was slow and miserable. We went from the mountaintop to some dark valleys. I was sorely disappointed in God’s crappy plan quite honestly. He took us away from our success to the desert to struggle?

But what I didn’t know was God was lining up something so much more than business success for us. Our willingness to go had brought us exactly where we needed to be, just not for the reasons we imagined. You see, just a few miles from our new home in the desert, across the border into Mexico were two little girls in an orphanage. We were lead there to find them. We were lead there because God had a tremendous blessing in store for us for all the days of our lives.

Gosh, what if we wouldn’t have been willing to give up what we had in Dallas to follow him to the desert? We would have never known what God had waiting for us. We would have missed it.

Someone listening needs to take that first step of willingness, loosen their grip on where they are and what they have, and surrender to God fully. Yes God, I will get started. Yes God, I will dare to go. Yes God, I trust you enough to believe you will make a way.

Someone else listening needs to keep going. That first step has already been taking and it was kinda exciting, wasn’t it? Now you’re on step 17 and the thrill has left, the reality has set in and if we’re being honest it sucks. I’ve been there. Here’s what you need to know … God’s not done yet. He’s taking you through this as a preparation for where he’s ultimately leading. You’re being refined for something so much better. Will you stick with it? Will you say Yes God, I trust you enough to believe you are still making a way.

By Lonnie|February 13th, 2020|Categories: Devotionals, Podcast|Comments Off on 532 Are You Willing