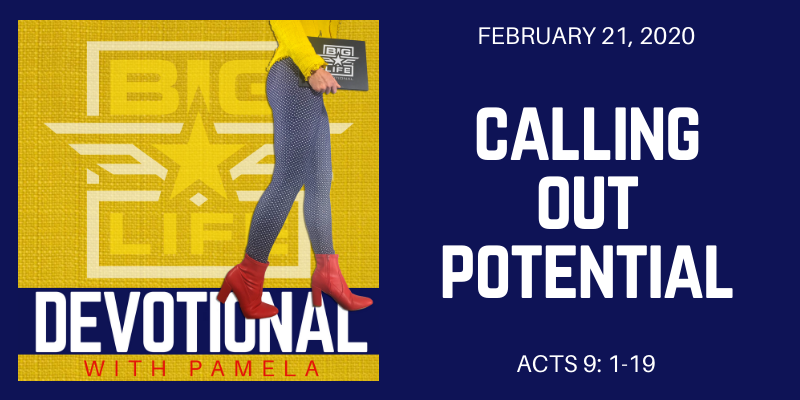 What should do you do when someone is on the wrong path in life? How can you genuinely help them get back on track and live well?

Well, I can tell you what doesn’t work … nagging. Nagging never works. I’ve never seen a changed person as the result of nagging, pushing, or complaining. Never.

Yet, isn’t that what we try? We start wars on social media with those who vote different than us. We are passive aggressive with our judgement towards those who live in a way different than our own. And at home, we nag. Whew, we nit pick and poke at stupid things that ultimately make no difference and all we do is drive a wedge between us and the person we’re trying to “change”.

Sure your way might be better and your intentions may be good, but girl your delivery is all wrong.

God is calling and equipping us to be better and do better. We have been changed so we can lovingly guide others in change. How do we do that?

We do this … we call out their potential.

Oh yes, every single person you come in contact with today is filled with potential. Potential to live well. Potential to be used by the almighty. Potential to make a difference in this world. Some people are simply living below their potential and all they need is one person to believe in and call out that potential.

We see this example in the story of Saul’s transformation to Paul. God used one person to call out his potential. Oh this is good, check this out!

Saul was still breathing out murderous threats against the Lord’s disciples. As he neared Damascus on his journey, suddenly a light from heaven flashed around him. He fell to the ground and heard a voice say to him, “Saul, Saul, why do you persecute me?”
“Who are you, Lord?” Saul asked.
“I am Jesus, whom you are persecuting,” he replied. “Now get up and go into the city, and you will be told what you must do.”
Saul got up from the ground, but when he opened his eyes he could see nothing. For three days he was blind.
In Damascus there was a disciple named Ananias. The Lord called to him in a vision, “Ananias!”
“Yes, Lord,” he answered.
The Lord told him, “Go to the house of Judas on Straight Street and ask for a man named Saul.”
“Lord,” Ananias answered, “I have heard many reports about this man and all the harm he has done to your holy people.
But the Lord said to Ananias, “Go! This man is my chosen instrument to proclaim my name.”
Then Ananias went , placing his hands on Saul, he said, “Brother Saul, the Lord—Jesus has sent me so that you may see again and be filled with the Holy Spirit.” Immediately, something like scales fell from Saul’s eyes, and he could see again. He got up and was baptized.

As we know Paul, formerly Saul, was no doubt an instrument to proclaim the name of Jesus, he was chosen to write the majority of the New Testament we read today. All while he was doing all the wrong things, on totally the wrong path, there was this potential within him.

I wonder who you’re frustrated with right now, a real jackwagon making life difficult for you, and what you don’t see is their potential. Their potential for good. Their potential to impact lives and perhaps even change the trajectory of yours.

I wonder who you know of that’s totally on the wrong path. It’s as if they have a mission to royally screw up their life and they are wildly successful so far. You’re frustrated because you don’t know how to save them. Well, take a load off sister, your job was never to save them … you’re not Jesus. That’s his job.

But maybe, just maybe your job is to remind them of their potential. Maybe your role in this is to show them there’s one person in this world who hasn’t given up on them and you still believe in that potential down deep within them.

And you know how God calls potential out in someone … he uses people like Ananias.

Ananias knew the truth about Saul. He knew he was a bad mamojamma. He knew he was dangerous and had caused much harm. It wasn’t that he was clueless or living in some lala land where he thinks nothing bad ever happens. But Ananias also knew God’s power was limitless, so if he said he was going to do something great, he believed it.

In obedience, Ananias went to Saul and did exactly what God told him to do. He laid his hands on him and greeted him. And when he did, Saul received his sight, his identity was changed to Paul and his mission began. This man forever impacted the world. Those words we often quote “I can do all things through Christ Jesus who gives me strength” … yeah, those were Paul’s words.

That potential was always within him. When the rest of the world saw a heinous, vicious, dangerous man, God knew his potential to be a world changer for Jesus Christ and he never gave up on that potential.

How do you do that? You show them you still believe in them. You use your love to prove it’s not too late for them. You dare to still show compassion and care when they’ve really done nothing to deserve it. You do it not to be right, but to do right. The right thing to do is to believe God when he says he started a good work within them and he’s not done yet. (Philippians 1:6) Darn right that scripture applies to them!

And now he says to you, call out their potential. Don’t walk away. Don’t give up. Don’t write them off as too far gone.

By Lonnie|February 21st, 2020|Categories: Devotionals, Podcast|Comments Off on 538 Calling Out Potential