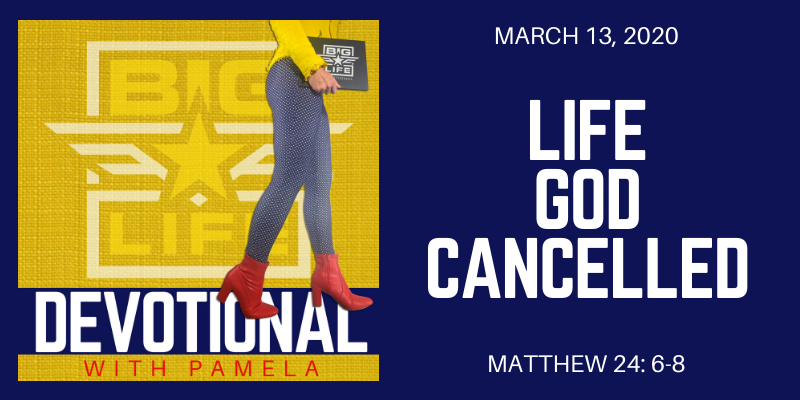 Oh, it’s happening for sure, cancellations are everywhere. The Coronavirus has schools being cancelled, games and concerts being cancelled, vacations being cancelled. Ya’ll Disney shut down! Airplanes have more empty seats than passengers. Many kids are home, and there’s a chance you will be too.

But make no mistake about it, God’s plans for you DID NOT CANCEL. He still has a plan, and it’s a good plan. Your purpose DID NOT GET CANCELED. You still have a job to do and a role to fill. Your future is still on track because none of this is a surprise to God. Not one bit. Jesus knew all about this.

In fact when asked about the end coming, Jesus replied in Matthew 24:6-8 “And you will hear of wars and threats of wars, but don’t panic. Yes, these things must take place, but the end won’t follow immediately. Nation will go to war against nation, and kingdom against kingdom. There will be famines and earthquakes in many parts of the world. But all this is only the first of the birth pains, with more to come.”

That was 2,000 years ago. He knew it was coming. We can go down that list and make a whole lot of check-marks. It seems the birth pains of Heaven are here. Actually, they’ve been here for quite some time.

And what does Jesus instruct us to do? “Don’t panic.”

That is very clear. Do not panic.

God’s plans haven’t changed. His plans for you still stand. You didn’t see this coming, but he did and he has made a way right through it.

I have a friend who is a producer in Hollywood. Every last show and event on her schedule has been cancelled. Her entire business is gone. And Jesus says “Becci, do not panic.”

I have a friend who runs a daycare. The schools in her area have been closed for 6 weeks. This means her kids are home and because of state guidelines in the daycare, she’s not allowed to bring her children to the daycare, so it must be closed too. Her income is gone. And Jesus says “Kelsey, do not panic.”

Andrea was on her way to Disney for Springbreak. Her kids had been counting down the days to the trip of a lifetime. Then Disney closed. Oh the disappointment. Their vacation is gone. And Jesus says “Andrea, do not panic.”

Jenny’s wedding is almost here. Big plans for her big day are majorly threatened. Could her wedding be cancelled by the state? And Jesus says, “Jenny, do not panic.”

Kim is on her final roll of toilet paper without a single store with stock in a 100 mile radius. Ya’ll their butt wipe is gone. And Jesus says “Kim, do not panic.”

Whatever your scenario and how ever this may have impacted your plans, your vacation, your business, your family, your livelihood, or your routine, Jesus is here today saying “DO NOT PANIC.”

Why? Because he knew this was coming.

HIS PLANS HAVE NOT BEEN CANCELLED.

God knew his faithful fellas Shadrach, Meshach and Abendnego would be stopped in their tracks from doing the good they were doing and be thrown in the fire. These were guys who had jobs and they were good at their jobs. They were being faithful and doing the right thing, and then boom … the King throws them in the fire.

That wasn’t fair. Just like it’s not fair jobs are getting cancelled, plans are getting cancelled, heck everything is getting cancelled. Countless lives are being impacted here. These are good people in the middle of a real mess and this fire may be getting real hot without a single member of your family even being sick. You may live in an area where there isn’t a single case of infection, yet the flames are right outside your door seemingly cancelling life as you knew it.

And what happens in the fire? What happens as Sharach, Meshach and Abendnego are surrounded by the threat of the flames? Right there in the fiery furnace, God was with them.

Daniel 3: 24-25 says the King looked into the furnace and says wait “weren’t there 3 men that we tied up and threw in the fire?” They replied, “Certainly your majesty.” He said “Look! I see four men walking around in the fire, unbound and unharmed, and the fourth looks like a son of the gods.”

They walked right through the fire and came out alive to tell the story.

Hillsong says it so well, “there is another in the fire, standing next to me.”

You are not alone my sister. God and his angels are standing right next to you. He is here, unshaken by the news reports. Unalarmed by what may or may not come. He is the one who holds back the sea on it’s edge so we can walk through on dry ground. He is the one who causes and earthquake that makes prison walls fall so we can live in freedom. He is the one who says your faith as small as a mustard seed can cause mountains to move in the name of Jesus.

And he is the one who has a plan for your life, and his plans WILL NOT BE CANCELLED.

Isaiah 41:10 says “Don’t be afraid, for I am with you. Don’t be discouraged, for I am your God. I will strengthen you and help you. I will hold you up with my victorious right hand”

Alrighty then God, we’re counting on that promise!

I will not be afraid. I will not be discouraged. I will receive strength and help from you. You will hold me up in victory right through this.

Let this be your declaration. When the rest of the world is talking about how horrible their cancelled plans are, you be the gal in the middle of the fire who says “GOD IS RIGHT HERE WITH ME!”

The plans you were so sure God had for your life last month have not been cancelled. Your plans may have cancelled, but his have not. It may not make a whole lot of sense right now, but remember God’s plans and his ways are better than anything we could have dreamed up.

Our way would have been without the fire. Like let’s skip the furnace scene God. Let us not have the encounter with the power tripping King. But God says, ‘I hear your plans, thank you for the input, but I have a better plan here.’

And through it all, his plans still stand.
His will concerning you is still in motion.
The future he has planned for you will not be changed.
Your purpose is not cancelled.

You have been given life today … your job is to live it well.

By Lonnie|March 13th, 2020|Categories: Devotionals, Podcast|Comments Off on 553 Life Got Canceled