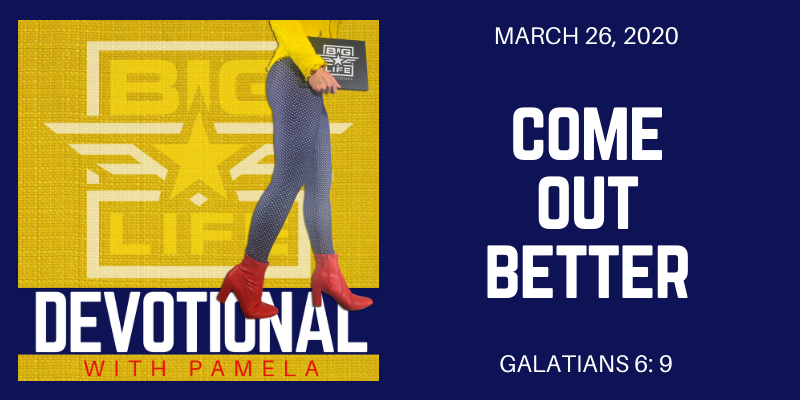 The non-essentials have been stripped away, and here we are today with a simplified lifestyle. We suddenly see life in a different perspective. We spend our days differently. We eat at home, we stretch what we have, we walk. I don’t know about your part of the world, but ya’ll our Starbucks have all shut down! People are cutting their own hair, breaking out the box color to cover those roots, painting their own nails and trying those at home waxing kits. Oh dang ya’ll, we’re gonna come out of this either all-nautral or some tragic looking beasts.

Here’s what I know, WE CAN COME OUT OF THIS BETTER.

Better because of the refining fires.

Now, in order for the fire to make you better, it must touch you. You must go through that fire. Impurities are only melted away in the heat. So, has today’s circumstances touched your life yet? Are you feeling the heat of the flames? Is this more than just a threat, but a real life unfolding of setbacks and hardship?

See it for what it can be my sister, THIS IS REFINING FIRE. This can make us better.

Or it can make us miserable. It can steal our progress and stunt our growth. It can dig our hole deeper to a point we never get out. It can ruin relationships. It can destroy hopes, dreams and goals.

Will you be better?

Some will, but not all.

Not me. And how about not you either.

What will be the difference here?

And on the other side, we will come out BETTER.

Galatians 6:9 says “So let’s not get tired of doing what is good. At just the right time we will reap a harvest of blessing if we don’t give up.”

No where have I seen God give us permission to give up here. No where have I heard God tell his girls we can just coast now. No where. No … he still charges us to move forward.

The story of Joseph in the Bible tells of a man who faced continual trouble. First at just 17 years old, his brothers grew jealous of him and sold him into slavery. Imagine how unfair and hard this must have been. Betrayed by his own family, even believed to be dead by his father.

As a slave, Joseph didn’t give up. When all had gone wrong, he still tried to do good. In Genesis 39:3 it says “the LORD was with Joseph, giving him success in everything he did.”

Success in everything he DID.

Did he receive success in the things he didn’t do? Wouldn’t do? Gave up on doing? No. It says he was given success in everything he DID even in the midst of hard times.

What will you KEEP doing right now my sister? What will you not give up on? This is the only way God can give you success in it. How is he supposed to give you success in reaching your health goals this year if you’re sitting around licking the cheese off your fingers after finishing that bag of Doritos? You don’t get to magically wake up with the body you want without being faithful here!

How is God supposed to give you success in repairing your marriage if you are an incessant nagging hag? Dang woman, it doesn’t work that way. Let’s just be real.

How is he supposed to give you success in your business if you quit working?

How is God supposed to protect your finances if you’ve turned to Amazon with a shopping habit? STOP BUYING CRAP! God can’t bless ignorance and I promise he won’t bless yours.

Joseph was always blessed by God because he never stop bringing his best in the middle of hard circumstances. As a slave in Potiphar’s house, he was promoted to a position of leadership. He went from slave to superintendent.

No! Because he didn’t give up.

Then he was falsely accused and thrown into prison. Once again it was unfair. But what happened in prison? Joseph continued to be faithful where he was with what he had. He was promoted to be in charge of the prison. Raised up to a position of leadership. Blessed and given success in everything he did.

Eventually Joseph is in a position to save all of Egypt from a great famine, including the very brothers that had sold him into slavery and wished him dead.

Joseph came out of the fires of life better. With everything that went wrong, he still did right. When others were bad, he remained good.

No, we have to show up even more. We have to stick to our resolve and not give up. Let’s face these fires, let’s feel the heat, and let’s move forward. Be refined and come out better my fierce sister.

2 Corinthians 4: 8-9 “We are pressed on every side by troubles, but not crushed and broken. We are perplexed because we don’t know why things happen as they do, but we don’t give up and quit. We are hunted down, but God never abandons us. We get knocked down, but we get up again and keep going.”

I don’t know why things happen as they do. I don’t know when this will end. I don’t know what it’s going to look like 2 weeks from now. I control none of that and neither do you. We can allow that to throw us in a tailspin of anxiety … or …. we can get up and keep going.

Those are our choices.

Which one is God calling you to?

Feel that tug in your heart? That little voice that convicts you to get better in this?

Be faithful. Face these troubles and push on. You don’t have to figure out, you just can’t give up. And if you have fallen down at this point and recognize your current choices and actions are not leading you in the direction you want, girl it’s time to get back up and fight!

COME OUT OF THIS BETTER!

By Lonnie|March 26th, 2020|Categories: Devotionals, Podcast|Comments Off on 562 Come Out Better