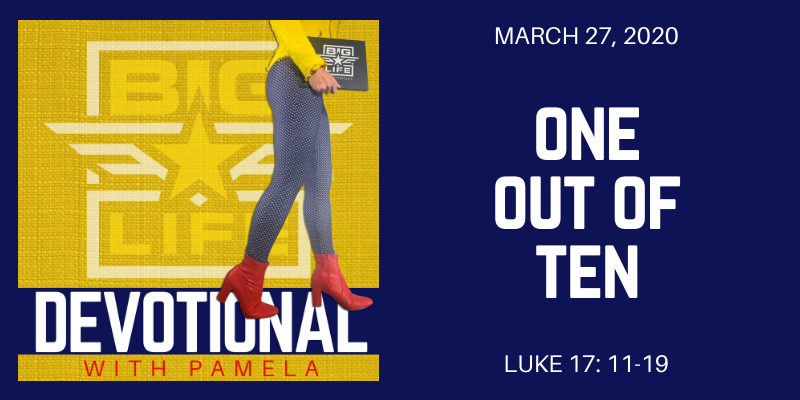 Has God been faithful to you? Do you have anything in your life as a direct result of his hand of mercy and grace over you? Does he know how you feel about it?

Seriously, does God KNOW you’re grateful? Have you told him?

Luke 17: 11-19 tells the story of Jesus encountering 10 men with leprosy. Of course Jesus does what Jesus does … he heals them. But what we need to remember is HOW he healed them and WHAT happened afterwards.

“On his way to Jerusalem, Jesus was going into a village where 10 men who had leprosy met him. They stood at a distance and called out in a loud voice, “Jesus, Master, have pity on us!”
When he saw them, he said, “Go, show yourselves to the priests.” And as they went, they were cleansed.”

There’s more to the story, but let’s stop right here. Did you hear that … AS THEY WENT, they were cleansed. It was their act of faith in simply going in the direction Jesus told them to go. On their way, they were healed.

It’s not so much about our arrival to a specific destination in life, Jesus just wants us to go the right direction in obedience. And when we do, things change. Yes, our problems are often solved ON THE WAY when we turn and go where God wants us to go.

Maybe God isn’t so much about the destination but the direction. What if our prayers became more about “God, help me to go in the right direction.” What if we were to release our incessant need to know how this is all going to work out and when exactly it will happen, and instead have a desire to simply be going in the right direction.

AS THEY WENT, THEY WERE HEALED.

These were outcasts with a highly contagious disease. (Sounds oddly familiar today doesn’t it? Girl, don’t go to Wal-Mart if you have the fever!) These lepers were supposed to hide on the outskirts of town while their limbs rotted off from this horrible disease. They were seeking Jesus for healing. Imagine their disappointment when his only answer was “go over there.”

Have you ever asked God for help, and received an answer you didn’t like? I once felt under attack by people who wanted to destroy me. I prayed and God told me he would defend me, don’t fight back. That’s totally not the answer I wanted. I wanted to fight back with a vengeance. I wanted to be proven right. His answer was one I didn’t like.

Do you ever get those kind of answers? Answers that don’t seem to fix anything or make any sense. That’s exactly what these lepers received. An answer anyone could have told them. Just go see the priest. That’s like the answer of “just pray about it.” NO DANG IT, I WANT YOU TO FIX THIS!

Faith is required when the evidence is against us, when it still doesn’t make sense. It’s a trust that GOD WILL MAKE IT RIGHT.

Is that where you are right now? In this place where it still doesn’t make sense? Where you don’t see the way through this? Where the evidence seems to support a total loss here? Will you trust that God will make this right?

Listen to me sister, this may be a mountain of a mess right now, but GOD WILL MAKE IT RIGHT.

The 10 men with leprosy received their healing on the way. Their obedience in direction delivered their answer. It wasn’t the destination at all. It was all about the direction.

Lord, help me go in the right direction.

GO in the right direction. This requires action. This means answers don’t come when we sit and dwell. They come on the way. What can you do today to show your obedience and just be ON THE WAY?

What if our prayer today is simply, “God help me head in the right direction and I will be obedient on the way.” It’s about this step right here. What will you do today while you still don’t know how this is going to all be okay?

Now, let’s read the end of the story. As the lepers were on their way, just going in the right direction, they were healed. One of the men turned around and came back to Jesus to tell him thank you.

vs 15-18: One of them, when he saw he was healed, came back, praising God in a loud voice. He threw himself at Jesus’ feet and thanked him – and he was a Samaritan.
Jesus asked, “were not all 10 cleansed? Where are the other 9? Has no one returned to give praise to God except this foreigner?”

Jesus expected praise for what he had done, but only 1 came back to thank him. All received the same healing, but just this one returned with praise. Notice it says this one was the foreigner, he was a Samaritan. The rest were locals.

Were they perhaps accustom to the power of Jesus? Expectant of his deliverance, and therefore ungrateful afterwards?

We have healthy loved ones in a time where disease is threatening us all … when is the last time we came back to Jesus and said THANK YOU FOR ANOTHER DAY OF HEALTH?

We have food to eat today in a time where some are concerned about their provisions. Have we even thanked God for what we have been given? Or did we expect it because it’s just our normal to have food in our homes? Aren’t we like the 9 who received their miracle and went on their way as normal?

I’m ashamed to say this is often me. I’m oblivious to God’s miraculous provision, protection and power in my life and often only offer a cheap blanket of “thank you God for my blessings.” Oh how he deserves more.

I want to be that 1 out of 10 who returns to praise him for what he has done. I want to be that little 10% who never grows accustom to his miracles in my life, preventing me from offering him what he deserves in return.

What do you have today? How has he provided for you? Where has his protection covered you and your family again for another day? What goodness is a result of his grace? What beauty is because of his blessings? Will you come back and thank him?

By Lonnie|March 27th, 2020|Categories: Devotionals, Podcast|Comments Off on 563 One Out of Ten