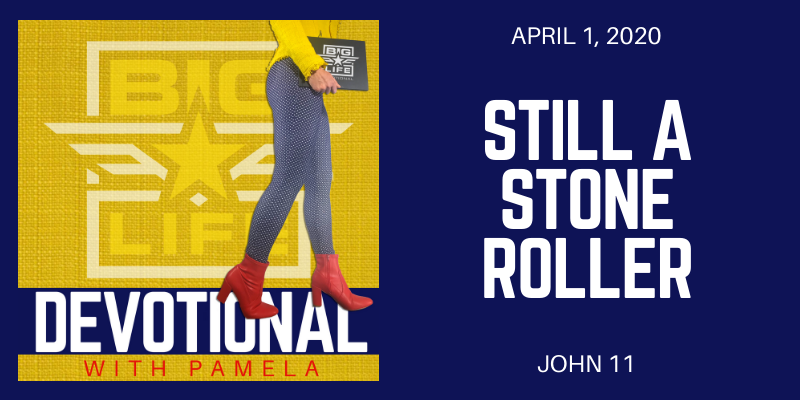 Jesus was a stone roller. He did the impossible. He brought dead things back to life. He rolled the stone back from his own grave to rise up.

And never forget, HE IS STILL A STONE ROLLER TODAY!

And can’t you see, that’s what he’s doing today. He’s preparing to roll some stones. Yes, stones in your life. Impossible in your life. Things that are dying right now in your life, drying up and ceasing to produce … they will be brought back to life. You may be down right now, but sister it’s time to rise up!

John 11 tells us the story of Jesus’ dear friend Lazarus getting sick. Jesus loved this man dearly and cared for him greatly. But check this out, in verse 6 it says “So when he heard that Lazarus was sick, he stayed where he was two more days, and THEN he said to his disciples, “Let us go.”

My human mind doesn’t quite understand this. If I could save a loved one from suffering, I would do it immediately. No one could stop me from going. Nothing could delay me from being there.

In fact, if I could snap my fingers and make our current circumstances change, I would. I would bring back every job. I would send home every nurse and doctor to be with their families because not one person would be sick. I would fill the streets with celebrations and unlimited hugging and dancing. Free tacos for everyone!

That’s what I would do. And I would do it today with no delay.

But God reminds me in Isaiah 55: 8-9 “(Pamela) your ways are not my ways. As the heavens are higher than the earth, so are my ways higher than your ways.”

I would fix this whole mess in a hot minute if I could … that would be my way. But God’s ways are not my way, his are higher and better.

Lazarus’ family stood by his bed and watched him die. They buried him. It was too late and he was gone.

We were never promised our faith in God would eliminate the “worse” in our lives. We were never offered an insulated safe place where life wouldn’t touch our reality. We were never told our journey would be easy or the path would be straight. No, in fact we were shown even for those Jesus personally loved while he walked this earth, THINGS GOT WORSE.

Now, Jesus is on the scene 4 days after Lazarus has died. The funeral was already over. His body is now in a tomb covered by a stone. Lazarus’ sisters, Mary and Martha knew Jesus had the power to save Lazarus before he died, but now he shows up and they know it’s too late.

Jesus always knew what he was doing. His delay was intentional because there were greater plans at work. The worst had to happen so the miracle could unfold and there would be no question of God’s great power.

So the stone was rolled away and Jesus says “Lazarus, come forth.”

Come out from where you have been. It’s time to rise up from here.

Why did Jesus wait? Why did he allow things to get worse? So all could see the power of being called to “come forth”. So there would be no doubt Jesus is exactly who he said he was, and God can do exactly what he said he can do.

What if we were created for more than we had been living and the only way we would ever see that is for things to get worse first?

What if his intentions for our lives are to live at a higher level than we have been living and a few things have to be stripped for us to see that.

If you have been in a funk, now God is calling you to come forth. Come out from where you have been. Come breathe in life deeper than you ever have before. Appreciate things you once rushed by. See his fingerprints on everything.

If Jesus would have healed Lazarus at the first signs of his sickness, few would have talked about it. Even if Jesus would have shown up beside his bed and healed him while there was still life in his body, the miracle may have been quickly dismissed and life would have returned to normal. But because Jesus waited, because things got worse, because the worst actually did happen and Lazarus was dead and buried, we’re still impacted thousands of years later.

HE WILL ROLL YOUR STONE.

He will do the impossible for you.

He will call you to rise up. Rise up to a higher level of living, and don’t go back to the way things were before. Live better than you ever did.

(ohhhhhh, I’ve had me some Lauren Daigle songs on repeat!)

By Lonnie|April 1st, 2020|Categories: Devotionals, Podcast|Comments Off on 566 Still a Stone Roller