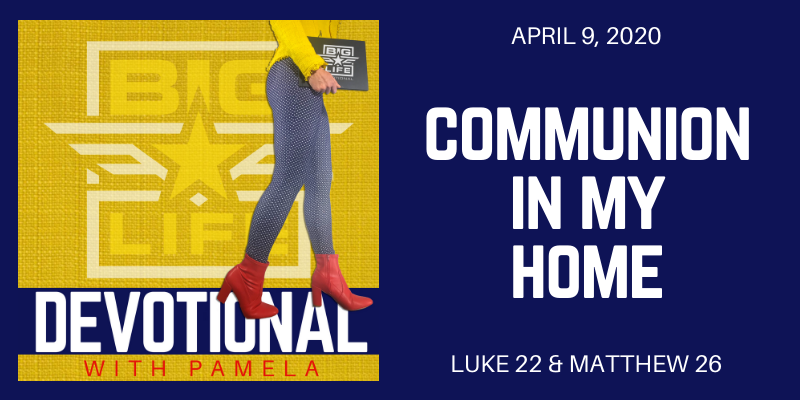 Today is honored as Holy Thursday. This is the day we remember Jesus’ final meal with his disciples before his crucifixion. That final meal is known as the Last Supper. You’ve likely seen the famous painting by Leonardo da Vinci depicting the scene around the table.

Imagine for a moment being at that table. Gathered in that room with Jesus on the night before he would face the cross. Jesus knew exactly what would unfold and he choose to be at that table. He chose to speak powerful words we would remember still today. He chose to give holy instructions to his followers which we will follow today.

The account of Jesus final meal is recorded in both Luke 22 and Matthew 26. Luke and Matthew were both there and they each gave their personal accounts.

Luke 22: 19-20 “Jesus took bread, gave thanks and broke it, and gave it to them saying “This is my body given for you; do this in remembrance of me.” In the same way, after the supper he took the cup, saying “This cup is the new covenant in my blood, which is poured out for you.”

Matthew 26: 26-28 “While they were eating, Jesus took bread, and when he had given thanks, he broke it and gave it to his disciples, saying, “Take and eat; this is my body.” Then he took a cup, and when he had given thanks, he gave it to them, saying, “Drink from it, all of you. This is my blood of the covenant, which is poured out for many for the forgiveness of sins.”

This is communion. If you’ve ever been in a church service of various religions and seen the little cups of grape juice and pieces of bread or cracker, they are doing as Jesus instructed in the Last Supper.

And here we are home in a quarantine with churches closed for the first time in our lifetime on Holy Thursday. Can’t we still partake? Couldn’t we still remember what Jesus did on his final evening of life here on Earth? Shouldn’t we still honor his teaching?

Individuals and families will take part in the first ever global communion right from their homes. I believe this will be a turning of the tides as we turn our hearts and minds toward Christ. A gathering of people around the world remembering what Jesus sacrificed for each of us.

A quick google search for live communion being offered on TV, Facebook and individual websites will guide you to an organized service to follow. Traditionally wine or grape juice is used along with unleavened bread such as crackers. If you have these items, great. If you don’t, remember Jesus turned water into wine, I’m pretty sure he can handle our lack of grape juice at this time and can be honored with a Cheese-It.

What’s most important is we take the broken bread or the cracker and we remember Christ’s body broken for us. He suffered for you. He took on every sin you would ever commit and it was laid on his body in atonement for your life. And Jesus says “take and eat, this is my body.”

Take what I have done for you. Let my sacrifice go within you. Consume what I have offered. Take my body which was given for you.

Jesus isn’t a show to be watched from a distance. He’s not a “sit in a comfy seat and watch me” type of savior. No, he’s a come in close and be part of this, personal type of savior. He says “here’s my body, let it be in your body. I will dwell within you.” Get in on this!

Blood was an offering for the covering of sins. Before Jesus, a sacrifice was made. A sacrifice of the life of an animal represented the price that had to be paid for the sins which we committed. In the passover, it was a sacrificed animal’s blood on the top of the doorposts of the Jews’ homes that protected their firstborn child from dying when the 10th plague swept through Egypt. The plague “passed over” their homes and they lived. Why? Because of the blood.

And now Jesus sitting in the upper room with his disciples, knowing of the cross which would be his to bare the following day, said, “This is my blood of the covenant, which is poured out for many for the forgiveness of sins.”

His blood was shed as a sacrifice. The ultimate sacrifice. A price paid for our sins. An offering that would protect us, cover us, and cause punishment to pass over us.

It’s hard to imagine thousands of years before we were ever born, this would be done for us, but it was. I once heard someone explain it like this:

On that cross, he thought of me. He could have brought down an army of angels from heaven and spared himself from that reality, but he didn’t. He stayed because of me.

He stayed because of you. He shed his blood so you would be covered. So your price would be paid. So you could be forgiven.

I love that Jesus said “drink from it, all of you.” ALL OF YOU. A personal invitation for each of us. Receive on an individual basis what was offered for all of us.

Now, when God looks at us, he no longer sees our sin. He no longer sees our failures and shortcomings, our wandering and our departure. He only sees his precious creation covered in the blood of his son. A high price paid for our redemption, and for some reason I don’t understand, God said we were worth it. Jesus said we were worthy. And so it is.

We receive today because Jesus made us worthy. We remember today, through communion, his broken body and his blood that was shed as a personal sacrifice for us.

And our response is, “Thank you God, I remember. I receive. And I am grateful.”

By Lonnie|April 9th, 2020|Categories: Devotionals, Podcast|Comments Off on 572 Communion In My Home