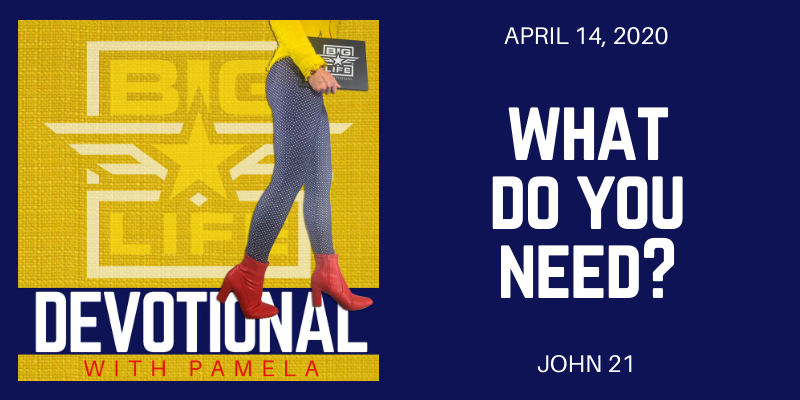 Ya’ll I’m falling in love with Jesus. I’m beginning to see him in a way I’ve never seen him before. Strangely enough, this new found love is the result of a YouTube series. Have you heard about the new series called “The Chosen”? Few people in my circle have seen it, but after hearing one person talk about their new found love with Jesus after watching, I went on a hunt for this series. Turns out, you can’t find it on Netflix or Prime, it’s solely on YouTube. 8 episodes, about 1 hour long each are there to watch for free. I’ve simply never seen Jesus portrayed in such a beautiful human form with divine power and yet loving gentleness.

Now that you’ve binge watched Tiger King and you’re looking for your next show, I highly recommend you check out the real king and watch “The Chosen.”

I’m completely stricken by this man Jesus. And to think, this is the one who loves me!

“The Chosen” doesn’t follow the normal timeline of most Jesus movies. It doesn’t end at the cross or the resurrection. Each episode is an in depth, detailed account of a familiar story in the bible.

Episode 4 is my favorite so far. The account of a man in trouble and in over his head. Simon had a tax bill he couldn’t pay, a wife angry for hiding it from her, and only one thing he knew how to do … fish. In desperation he spent the entire night fishing. His friends joined him that night in an effort to help bring in enough fish to pay his debt.

But, the entire night was spent dragging in empty nets. They were exhausted and Simon was desperate, knowing the deadline was now here and he had nothing.

This is what you call “the end of your rope.” When you’ve done all you can do and it still isn’t enough. When you’ve run out of time and out of resources, and definitely out of luck.

I have to wonder if anyone is there today? At the end of your rope? Where what was bad got worse and you don’t see a way out? You have a need, a true need.

This is where Jesus shows up. Jesus responds to need. His place is smack dab in the middle of your need.

Now I know the story of Jesus showing up on the shore after Simon’s night of futile fishing. I know what happens next, but watching it unfold in this series impacted me like never before.

I’m not a professional fisherman by any means. I don’t so much like fishing as I like catching. I’m all in if I’m reeling them in, but sitting for hours without a bite isn’t necessarily my idea of awesomeness. My husband on the other hand, well he can fish for days on end and find pure bliss. Catch or no catch, he’s just happy to be fishing.

I’ve been guilty of growing inpatient and throw out a hail Mary prayer like it’s a long shot and ask God to give me a fish. Bring a big one right to my hook and let me reel him in. I know God could do that. It’s not ridiculous to think it’s possible. But it’s never happened.

But maybe that’s because I’m not in NEED of a fish. I have no true need of catching a fish, I’m just bored from my unsuccessful attempts.

Jesus responds to NEED. What is it you NEED?

Simon needed fish. Fish were his livelihood, not just his weekend fun. Without a catch, he did not have what was needed to survive, and his entire night of fishing had left him without a single fish. Nothing had worked.

Here is his need … enter Jesus.

We read in John 21, Jesus is standing on the shore and asks, “hey boys, did you catch anything?” As if he didn’t already know. The fact that they hadn’t caught anything is exactly why he was there.

Then he tells them to go back out and put their nets on the other side of the boat. It’s all familiar right? We’ve heard the story before, just skip to the end where they catch so many fish their boats nearly sink.

But last night watching this unfold in this show, I saw something I had never seen before. Jesus watching it all happen. Jesus looking at Simon and his friends fishing with such compassion. He saw a need and he was responding to the need. Not because he had to, but because he WANTED to.

Jesus knew how frustrated they were. He knew how desperate they had become. And he knew darn well their nets had been empty.

Jesus knows you’re frustrated right now honey. He knows you’re growing desperate. He knows, and he cares. It is your need in this situation that has drawn Jesus in. He is here now in response to your need and HE WANTS TO HELP YOU.

He doesn’t have to, HE WANTS TO.

Won’t you let him?

Because EVERYTHING changes when Jesus is on the scene. The very things that have been nothing more than a disappointing failure can suddenly be an overwhelming success when Jesus is in it.

Jesus, I have a need.

Why is it we immediately dismiss the opportunity to get Jesus involved because we think he’s too busy. Like he doesn’t have time to be fiddling with me and my needs. He has bigger things to be dealing with. I don’t want to “bother” him. Anyone else ever feel that way … like you would be bothering Jesus.

So, we don’t ask. We don’t seek him. We don’t invite him onto the scene.

Girl, get over yourself! You were created to need him. And he WANTS to help you.

As I’m watching “The Chosen”, I see it in Jesus’ face … I see what I have been missing in this story. His excitement to help. His love in meeting a need. His ability to do the impossible with such ease, and his joy in responding to the need.

Scripture says after putting the net down on the other side of the boat, the nets were so filled with fish they began to break. One account says there were 153 large fish hauled into the boat. So much that it began to sink.

Imagine that for a moment. This is a small fishing boat. 153 large fish! That’s massive! This was Jesus’ response to a need. His response to frustration and hopelessness.

Why was he so excited to respond to Simon’s need? Because nothing proves who Jesus is more than a personal need being met. When you’ve received provision directly from the hand of God, you know and you never forget.

Could this be why you have this need in your life right now? It’s a need that will change everything for you. This is where Jesus responds. This is where he does what only he can do in response to your need. And when he does, you will know. You will personally know his power. You will personally understand his love. And you will never be the same.

This is the purpose of your need my sister. It’s not a punishment. It’s an opportunity to know Jesus better.

And you will know. You will know Jesus in a way you’ve never known him before.

By Lonnie|April 14th, 2020|Categories: Devotionals, Podcast|Comments Off on 575 What Do You Need?