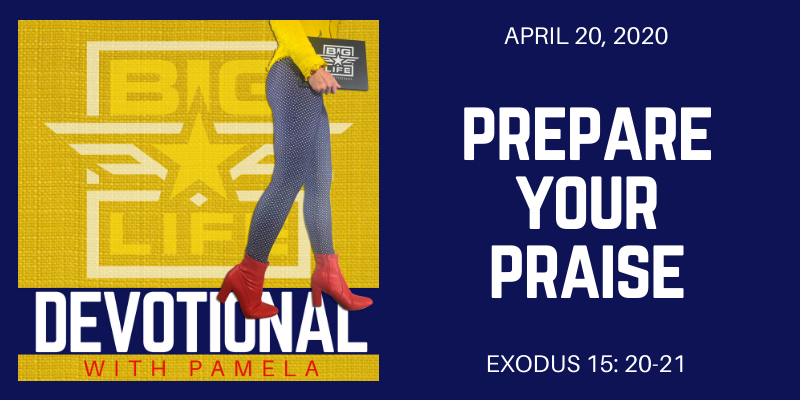 You may be going through hardship now, but are you prepared for victory? What will you do when this struggle turns to success? Prepare yourself now for the other side.

Exodus tells us of the great exit of the Israelites from their 430 years of slavery under the rule of Egypt. After plagues troubled Egypt, the Egyptian ruler Pharaoh believed it was because of their slaves, and he demanded they leave overnight immediately. Scripture tells us the Israelites packed up so quickly and left in the night, they didn’t have time to add yeast to their bread, they simply grabbed what they had and ate unleavened bread on the journey.

They left in a hurry. And wouldn’t you after spending your entire life in slavery? Freedom was offered overnight, and they ran.

And you likely know the rest of the story. As they ran, their captor changed his mind and ran after them with a great army. God led the Israelietes with the pillar of fire at night and the pillar of cloud in the day and he intentionally led them to the shores of the Red Sea.

They came to the place where they were sure death awaited them. Swim the sea and drown, turn back and face an angry army.

But this is where God had led them because he had a plan. A plan they could not see and a plan they would not understand.

Maybe that’s where you are right now. You are right where you’re supposed to be in this hardship and struggle. God hasn’t forsaken you, he has guided you. And this dead end you face, this impossible, is by the order of the Almighty. Why? So he can do the impossible on your behalf.

There’s only one way you’ll ever know your God is the God of the impossible, and that’s to stare down impossible and watch him make a way.

Were the people scared? Absolutely. Even after seeing how God was guiding them with the pillar of clouds and the pillar of fire? Yes. Wouldn’t you be scared? This is a dead end.

It’s completely normal to be scared in your situation. It’s normal to lose sleep. It’s normal to fret and worry. However, remember how Jesus was sound asleep in the boat during a storm? That’s the peace he offers us! His spirit now lives within us, and that’s not a freak-out, panic spirit. It’s a spirit of power and peace.

We don’t have to freak out right now. You don’t have to worry yourself sick. Not when the spirit of Jesus dwells within you. You can trust he is with you and he will not leave you. He is making a way through this.

Just when the Israelites are freaking out, certain they’re facing death, Moses, led by God, says “Do not be afraid. Stand firm and you will see the deliverance the Lord will bring you today. The Egyptians you see today you will never see again. The Lord will fight for you; you need only to be still.”

Are these words you need to hear today? DO NOT BE AFRAID. STAND FIRM AND YOU WILL SEE THE DELIVERANCE OF THE LORD. THE LORD WILL FIGHT FOR YOU!

Moses then stretches his staff out to the water and the sea is split in two and stands up on it’s end. A perfect path of dry land was made through the sea.

Did the people do anything to create this miraculous way? No. They stood and faced their impossible. They didn’t jump out into the sea and start swimming. They didn’t run back to their captors in a panic begging for their lives. They stood on the edge and waited for God to fight for them.

Maybe that’s where you are today … on the edge.

What a beautiful place to be. Never forget you serve an unstoppable God. He is not afraid of impossible odds. He is fighting for you so you can count on the victory. One way or another, there will be victory here.

So, the Israelites cross the entire Red Sea while it stands up on it’s ends and God holds back the water. The moment they cross, the Egyptian army chases after them and God allows the sea walls to crush them and drown them all.

On the other side of the sea, having seen the impossible God had just done for them, the Israelites break out in song praising God.

Now here’s what I want you to see. The point of sharing this entire story.

Exodus 15:20-21 “Then Miriam … took a tambourine and led all the women as they played their tambourines and danced. Miriam sang this song ‘Sing to the Lord, for he has triumphed gloriously.’

Miriam had her tambourine with her.

Now remember, they had left captivity in Egypt overnight. They were in such a rush they couldn’t even grab yeast for their bread to rise. Bread was their staple, it’s how they would survive, and there was no time for the essential ingredient of their only food.

You see, this woman had prepared for celebration. She was counting on God to show up. Her praise was premeditated. She planned for the day she would honor God for doing the impossible for her.

Have you planned for the day God will do the impossible for you? Will your praise be premeditated? Premeditated, meaning a thought out plan in advance. Premeditated praise. Have you prepared for your celebration?

God will guide you if you will follow him. Will it be easy? No, probably not. He may even lead you right to some big edges in your life which look like sheer defeat. But you only stand on the edge so you can see the unmistakable power of God.

Prepare your praise now.
Raise your hallelujah.
When you do, heaven comes to fight for you.

By Lonnie|April 20th, 2020|Categories: Devotionals, Podcast|Comments Off on 579 Prepare Your Praise