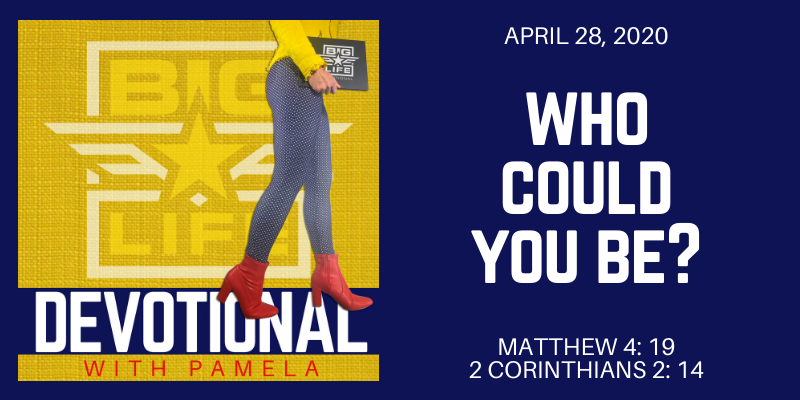 Today, you and I receive that same invitation. Come, let’s follow Jesus.

Jesus told those fishermen if they would follow him he would make them fishers of men. What they had been doing would be elevated to a whole new level of meaning and impact. The skills they had would be used for a greater purpose.

Do you know why you long for more? Because you were created for more. It is by great design of the master that you desire a greater purpose. It’s not you being selfish or ungrateful for where you are, it’s the result of a calling on your life. A calling every single one of us are beckoned by. The calling of an adventure with Jesus where we become someone more and do something greater.

Now, this is important … how would these simple fishermen achieve this higher level of living and find greater purpose? Jesus said “I WILL MAKE YOU FISHERS OF MEN.” Jesus does the making.

Here we are trying to remake ourselves while we contort into some twisted shape hoping the new thing sticks, and we’ve missed the invitation. If we will follow Jesus, he will make us into something greater.

Simon and Andrew were nothing more than fishermen. They had the very basics of skills and job titles. Catch fish and sell the fish, repeat again the next day. Yet, they were qualified for MORE.

Why do we disqualify ourselves, assuming we could never do anything great for Jesus? It’s easy to see the speaker on the stage, the author of the book, or the band singing the song and believe they were created for something bigger than you … BUT YOU WOULD BE WRONG.

Everything you need to do is summed up in Jesus’ invitation. Follow him and he will do the making!

I’m a little country girl without a single day of college, just following Jesus on a great adventure while he makes me into more. I’m a follower. He’s the maker.

Simon and Andrew had one skill, catching fish. Jesus would use their skill for a great purpose and instead of drawing in fish, they would draw in souls. They weren’t great speakers or authors, they weren’t powerful or influential, they didn’t have wealth or status.

And … Jesus did the making.

He took what they could do and multiplied it beyond their wildest imaginations. They not only witnessed miracles, they were part of the miracles. They traveled, they experienced, they grew, and they became. Became who only Jesus could make them become.

As you follow him, he will do the making of YOU.

The transformation will happen so gradually you won’t even know it’s happening sometimes. But you will begin seeing things differently. Your perspective will be changed. Your thoughts will change. Your words will be affected. Your heart will be turned.

Then your actions will be impacted. Your habits will change. Your desires will shift. Your courage will build. The opportunities will come, and one day you’ll realize you’re doing things you never imagined you could do.

And it’s all a result of one thing … following Jesus. Not following Jesus to a conference or a business meeting. No, following Jesus as he leads you on an adventure. And on this adventure, he changes everything. He makes you into exactly who you were created to be, but could never become on your own.

Simon was just a fisherman, but Jesus saw more. Simon became Peter, the one whom Jesus said was the rock on which he would build his church. Look who he became. And how did it all start? Just an ordinary day of fishing when Jesus extended an invitation to come follow him.

Simon didn’t have to bend and contort himself into becoming something he wasn’t. He simply had to follow Jesus and let Jesus do the making, the changing, and the becoming. Jesus gave him his new name and his mission because he had made him into more.

Remember the story of Paul. A man who was also changed by following Jesus. Formerly Saul, a persecutor of Christians on a mission to cut off the heads of those who claimed to follow Jesus. But when he had an encounter with God, he was changed forever and became Paul, the author of the majority of the new testament.

Paul was a changed man when he began following Jesus, and Jesus made him into a man worthy of a greater purpose. Nothing in his past could hold him back from the life he was created for.

And honey, nothing in your past could hold you back. Nothing you’ve done is beyond the reach of Jesus. He can use your every mistake and regret for something good now. All you have to do is follow him.

This changed man Paul wrote in 2 Corinthians 2:14 “But thanks be to God, who always leads us as captives in Christ’s triumphal procession and uses us to spread the aroma of the knowledge of him everywhere.”

Well, that’s confusing. God leads us as captives? Wait, I thought we were set free, but now we’re captives in some type of parade?

To understand what Paul is telling us, we have to go back and understand traditions of that time. When a king would emerge as victorious after a battle, he would take his most prized captives from his defeated foe and march them down the streets in a procession, displaying his victory. These people were yours, but now they are mine because I have defeated you!

Jesus gave his life on the cross, went to the pits of hell for 3 days and battled with Satan. You know who he was battling for? Me and you. He was fighting for us. He rescued us from the punishment of our sins and the plans the enemy had for us, he took us as his own and marched us out in victory.

Jesus is saying “you had these people trapped following your evil plans for their lives, but now they are mine because Satan, I have defeated you!”

We are captives in Christ’s triumphal procession. We have been rescued by Jesus and marched right out of the grip of the enemy, set free to live the life we were created to live. And all we have to do is keep following Jesus.

“Come, follow me”, Jesus says. Oh, where could Jesus take you? What adventures await? Who will you become? To find out, all you have to do is decide to follow him.

By Lonnie|April 28th, 2020|Categories: Devotionals, Podcast|Comments Off on 585 Who Could You Be?