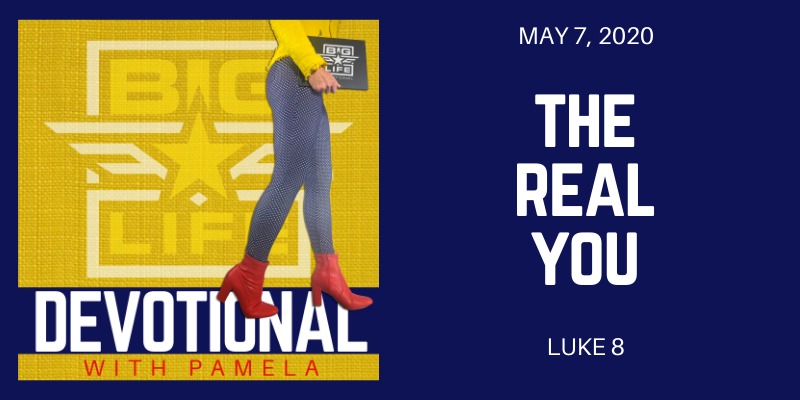 Have you ever gotten on the right track, made progress, then for one reason or another slipped and gone back to old ways? Maybe this is even your track record. You know the pattern. You make a positive change, that change lasts for a short season, but don’t get too excited because you know it won’t last.

Now you have this little voice in your head that tells you this is just who you are and how it will always be. Eventually you question why even try. I mean what’s the point when you know positive change won’t last. You’ll lose all you worked so hard for again, you’ll go back to being out of balance, out of shape, out of patience, out of energy and out of willpower to do a dang thing about it. That’s the way it’s always been, so of course that’s the way this will go down too.

You may be doing good now, but in the back of your mind you know this change won’t last. You’ll go back to the old you again because you just can’t keep up this level of effort long term.

So you fear. You fear when you will slip again. You fear when this new found strength and energy will go away. You fear all the progress you’ve made going down the drain.

Let me speak truth into your life today. Let me shed light on this common fear and nagging voice you’ve come to believe as a voice of grounding truth.

YOU DON’T HAVE TO GO BACK TO WHO YOU USED TO BE.

MAYBE THE OLD YOU ISN’T THE REAL YOU.

Maybe the girl who struggled to get out of bed, the girl who wasted her days, the girl who could never get herself to actually do the things she knew she needed to do, was NEVER you. That was the cheap, imitation, lesser-than version of you. That girl was an imposter.

And now that she’s exposed, she has no place in your life.

The enemy loves to play the screw up and beat up game. He points out all the times you’ve screwed up in the past and paints a picture of a future holding more of the same. Shame and guilt become your companions. You’re so burdened with all the times you’ve screwed up, and all the beatings you’ve given yourself, you lack the energy to believe anything different could even be possible for you.

The enemy tries to convince you something is wrong with you and you’re broken beyond repair. You see other people who have changed, others who have harnessed the power to do the things you want to do, but you have come to believe after enough failed attempts, you don’t have that same power. You are some how lacking what others are equipped with.

Here’s your truth: That weak, overwhelmed, miserable, stuck you is THE IMITATION VERSION OF YOU. She’s an imposter. That isn’t the real you.

And because she’s not the real you, you don’t have to keep going back to her.

HOW ABOUT YOU INVITE HER TO STAY?

This is where our focus needs to be. Instead of fearing the old imposter, weak version of you coming back and wrecking your progress, harness your God given power and declare from this day forward you won’t settle for anything less than THE REAL YOU!

God made no mistakes when he made you. He made you in his image, whole and complete, lacking nothing. This is who you really are. A vessel for the power of God, not a vessel for the lies of the enemy.

The lies of the enemy tell you you’re fat and you’ll always be fat.
The truth of God says I made your body to be a temple and I gave you the power to change any bad habits you need to change.

The lies of the enemy tell you you’re lazy and never stick with anything long term.
The truth of God says you have the ability to do more than you could ever imagine and nothing will be impossible for you when you partner with him.

The lies of the enemy tell you something is wrong with you.
The truth of God says he made you on purpose, with a purpose, and you have been perfectly equipped to rock this life you have been given.

The Bible tells us stories of people who had been living as someone they were never created to be. Habits had formed, bitterness had taken root, and they were known for a lifestyle to be ashamed of.

Of course there was Saul. A dangerous murderer. He had been on an angry mission his entire life and everyone knew you don’t screw with Saul. Yet, this angry murderer isn’t who he really was. This was an imposter showing up making the wrong choices. He had been deceived believing he was this lesser-than version of who he was created to be. God revealed his true identity, changed his name to Paul, and for the rest of his days, he lived a radically different life. He never fell back into old habits, because those old habits weren’t his true nature. Once he started living life as his true self, he never returned to old ways.

And honey, once you start living your life as your true self, you don’t have to return to old ways.

Let the real you, the one God had in mind when he created you, run this show, make your decisions, choose your attitude, and be in charge.

Yeah, I know you used to be lazy. Me too.
I know you used to have some really crappy habits. Me too.
I know you’ve screwed this thing up a time or too. I’m right there with ya sister.
I know you’ve beat yourself up over all the times you’ve slipped and gone back to old ways losing all your progress. I still have a few old bruises from the same thing.
But once I fully understood THE OLD ME ISN’T THE REAL ME, I no longer had to fear going back there.

When your thoughts are continually filled with reminders of past failure and fear of the next failure, you’re naturally drawn to failing again. It’s like driving by a wreck on the side of the road, as you look you naturally turn right towards it and threaten to crash yourself. I can’t safely drive staring at the wreck on the side of the road, or focusing on the images in the rear view mirror. And you can’t safely continue on towards living the life you were created to live as the person you were created to be, worried about going back to that old version of you.

STOP LOOKING. STOP OBSESSING. TRUST GOD IS FREEING YOU FROM THIS LESSER-THAN VERSION YOU WERE PRETENDING TO BE, AND NOW EMPOWERING YOU TO BE WHO YOU WERE ALWAYS CREATED TO BE. THE REAL YOU.

Before her encounter with Jesus, she was suffering. She was shamed and broken. She was avoided and left by others as useless and beyond hope.

But this wasn’t the real Mary Magdalene. This was who the enemy tried to make her become. He had plagued her with 7 demons, and those demons had stolen her identity and made her believe she was someone she wasn’t. In Luke 8, when Jesus healed her of these demons, she was freed to be herself. Her true self. She never had to worry about going back to who she used to be. She now knew who she really was.

May Jesus free you to be who you really are. The true you.

Not this lesser-than version the enemy has been trying to convince you of.
Not this woman incapable of lasting change … no, that’s not you.
Not this broken beyond repair girl who can never stick with doing the things she knows she need to do … that’s certainly not you.

You are a vessel for the power of God. You were created on purpose with a purpose. You were chosen, hand selected, for a time such as this. You have been perfectly equipped with everything needed to live your life fully. This is the real you.

Make friends with the real you.
You never have to go back to that old imitation version of you again.

By Lonnie|May 7th, 2020|Categories: Devotionals, Podcast|Comments Off on 592 The Real You