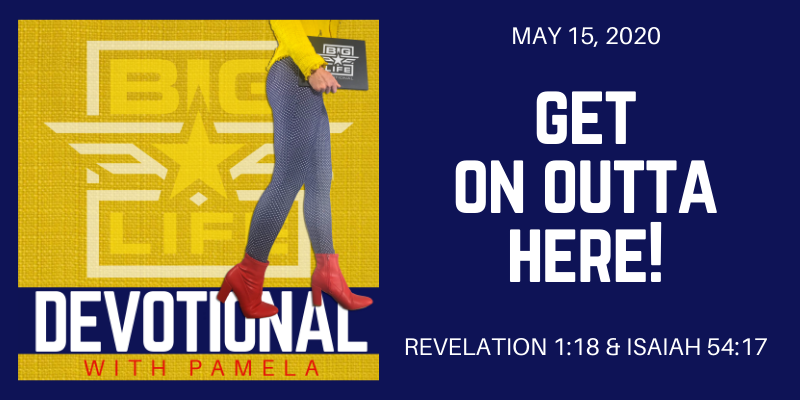 You have a purpose. That purpose is threatened.

You are overflowing with potential. That potential is under attack.

You have a destiny. That destiny has a detour.

You have a creator who has tremendous plans for your life, and you have an enemy who is actively fighting every single one of those plans. Your enemy is Satan and he runs a prison. A prison with bars of captivity imprisoning purpose, potential and destiny. A prison with a cell just for you, designed for one thing … to hold you back from living the life you were created for.

Maybe you’ve spent some time in that prison cell believing the lies of the warden. Believing your past defined your future. Believing you were unworthy of anything more. Believing something was wrong with you. Believing you could never change and life would always be this way. Believing if others really knew you, they wouldn’t like you.

Understand this, the doors to your prison cell have torn off the hinges and YOU HAVE BEEN SET FREE! You don’t belong there. You are free to fulfill your purpose, live up to your potential, and step into your destiny! Satan can’t hold you back for one more day.

Only you can do that. If you’re stuck, look around … are you the one holding yourself back here?

We have an image of Jesus as a gentle, soft spoken, caring man with shoulder length curly hair. He’s either an innocent baby in the manger, a man in a robe and sandals with an outstretched hand, or a beaten, bleeding victim of evil hanging on the cross.

Jesus said in Revelation 1:18 “I died, and behold I am alive forevermore, and I have the keys of Death and Hades.”

Jesus has the keys to Hades, that’s the keys to Hell. The prison where Satan intends to hold you back under attack has no power because Jesus defeated the warden and took the keys!

The keys to your freedom are in the hands of Jesus. Girl, you have been set free. Satan has no power over you, he has been defeated. He is now under your feet.

Yet for some reason, we put Jesus back in the manger or hanging on a cross, and we wander around in a prison cell flirting with the plans the defeated enemy had for us. Letting him get in our head and convince us with his lies. Accepting his cheap offers of ease and comfort, when girl, LOOK AROUND … IT’S A PRISON … YOU DON’T BELONG HERE!

Jesus isn’t hanging on the cross anymore. He’s not helpless or defeated. He stands tall and mighty, victorious over the battle for YOUR LIFE and he holds the keys to your freedom. You are not a captive to a single thing the enemy has tried to use to hold you back in the past.

“Don’t Tread On Me” by We the Kingdom

Hey devil, get on outta here. You get on up and leave, you’ve walked on me for the last time. You have NO PLACE IN MY LIFE. You have no power over me. Your prison has been shut down. My cell is empty and I’m not going back there. Jesus fought for me, and he won. Your head has been crushed. You’re choking on the blood that bought my freedom. END OF STORY.

The Lord says in Isaiah 54:17 “No weapon formed against you shall prosper.”

Notice it doesn’t promise weapons won’t be formed. It doesn’t promise an attack free life. There’s no guarantee of ease here. You simply have a promise that as the weapons are formed against you, they will not be successful. As the attacks come, you will not be overcome. As the battle comes knocking on your door, you can confidently stand knowing VICTORY IS YOURS.

Powerful, relentless, unstoppable Jesus set you free. You never, ever have to play victim to the enemy’s attacks. You never have to fear his weapons against you being successful. He has a place, and that place is as a defeated foe beneath your feet!

Why would he ever hold you back from the life you were created for? Why would he ever convince you with his lies that you are unworthy or incapable? Why would his attacks ever be successful? ONLY IF YOU ALLOW IT. Only if you return to that prison cell and plop yourself down in the corner. Don’t follow the enemy into the darkness. You don’t belong there.

There will be many weapons formed against you. Countless attacks on your value and worth. Your purpose will be threatened. Your potential will be questioned. Your destiny will be in shadows. But you already know how this story ends.

Don’t fear my sister, this weapon will NOT prosper. The enemy will NOT win here. You’re not stuck here, you will not stay here, you are now free to step into your fullest potential and live the life you were created for.

By Lonnie|May 15th, 2020|Categories: Devotionals, Podcast|Comments Off on 598 Get On Outta Here!