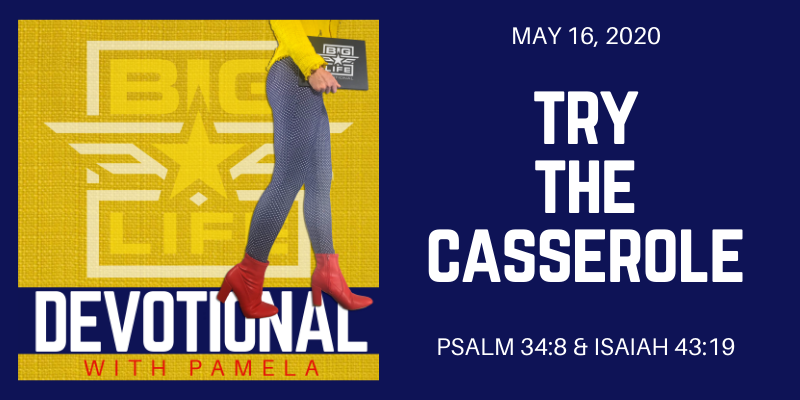 If you’ve ever had a picky kid, you know the pain of introducing a new food. Your offers are immediately met with resistance. They don’t want new, they want the familiar chicken nuggets. Their mind is set firmly on not liking it before they even try it.

My kids were all 3 raised in a house with a rule. You eat what we serve you, or you don’t eat. They didn’t have to love it, but they had to try it. This rule created an open mindset and a willingness to discover new things without first assuming they would be bad.

Here are 2 things you need to know:

1. God knows what he’s doing.
2. God is doing something new in your life.

Are you willing to try it? Or are you predetermined to not like change?

What if God’s rule is much like our family rule; at least try it honey, or go hungry.

How many of us are walking around hungry right now because we refuse to accept the offering of something new? We want what once was, what used to be, what we always had. We want the darn chicken nuggets … but chicken nuggets aren’t being served here. So we sit at the table starving for something, but only looking for what we had instead of tasting what is here now.

TASTE AND SEE THAT THE LORD IS GOOD.

Just try it! Try what God is offering now. Try taking that next step. Try seeing just what can happen here. Try it instead of dismissing it with your predetermined disdain. God knows what he’s doing and he is here doing something new in your life.

I’ve been listening to Holly Furtick a lot lately. Holly has the sweetest voice with the power punch of words that just get me in my gut. I generally write as fast as she can talk because I want to remember everything she says. I also listen at least twice because it seems I missed a lot the first time.

My notes from last week say “I often don’t want God to do a NEW thing, I want him to FIX an OLD thing.”

Isn’t that where we are? We just want God to fix what isn’t working now. We want life to go back to normal. We want this old thing we had, and God says in Isaiah 43:19 “See, I am doing a new thing!”

But God, I just want you to warm up my old familiar chicken nuggets.

We’re sitting here with our lips sealed, shaking our head back and forth resisting the fork delivering something new. Pushing the plate away refusing the offering. No. I just want my old thing fixed.

God is done with the chicken nuggets! It’s time for something new my sister. Won’t you taste and see what he has for you now?

Or will you go hungry? Will you stay here stuck? Will you be desperate and miserable by your own choosing?

You know the chicken piccata casserole you’ve placed on your kid’s plate is freaking delicious. What’s being offered here is so much better than what they’re used to eating but if they refuse to taste it, they will never know. God knows his new offerings to you now are pure goodness. But your kids don’t like hidden green things in their food, and you don’t like the unknown, so just like them, you’re refusing.

GIRL JUST TRY IT! Taste and see what he is doing now. It is good.

The Lord is good. You can trust him. He’s bringing something new into your life. Don’t miss it because you’re fixated on what used to be.

I know you liked what you had, but it’s time to move beyond chicken nuggets. Why? Because it’s better for you. God knows what’s best for you. He knows in order for you to ever get to live the ridiculously good life he has planned for you, you’re going to have to try some new things. For you to become who he created you to be, he’s not going to just fix an old thing, he’s going to do a new thing … and you’re going to have to trust him enough to try it.

If I’m hungry in any area of my life, it’s because I’m refusing God’s new offerings. He has exactly what I need, but it may not be what I always had before.

Sometimes all we really need is to get hungry enough to try what’s on our plate now. Could that be where you are? You’ve been holding out for far too long and the harsh reality is the chicken nugget days are gone. We’ve moved on. It’s time to step up and try this new thing. It’s chicken piccata casserole, a mixture of a whole lot of things … and yes, it has hidden green things in it.

God is leading you somewhere new. He’s doing a new work. What was once impossible will now be possible. The door that has always been locked for you will now open … won’t you try it again? Breakthroughs are coming. Change is happening. Goodness is ahead.

Won’t you try it? Taste and see, the Lord is good.

By Lonnie|May 18th, 2020|Categories: Devotionals, Podcast|Comments Off on 599 Try the Casserole