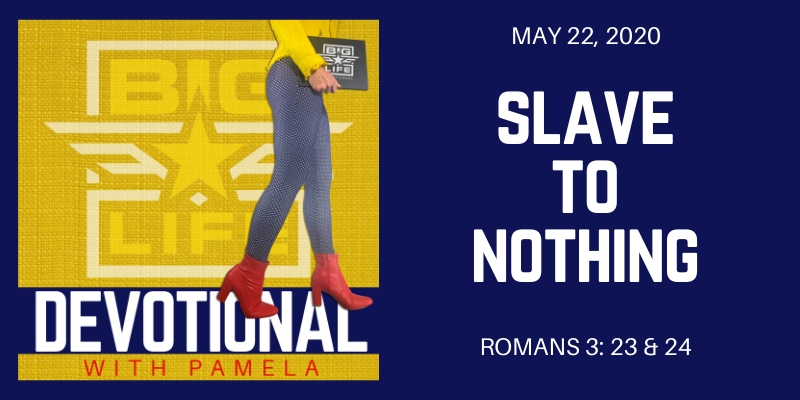 THAT GIRL WAS NOT THE REAL YOU! It may be who you were showing up as in the past, and the past may be as recent as yesterday, but honey that isn’t you. That’s the false identity of a lesser than version of you the enemy has tried to sell you. Don’t settle for this imposter. Don’t be held captive by who you were and what you did. Scripture tells us Jesus came to set the captives free. If you have been imprisoned by past mistakes and held back by voices that tell you ‘you can’t and you never will’, Jesus came to set you free! YOU ARE FREE FROM YOUR PAST. FREE TO LIVE UP TO YOUR POTENTIAL. FREE TO BECOME WHO YOU WERE CREATED TO BE.

I have a new song for you today, “Slave to Nothing” by Zach Williams.

You can tell me what I did
You  can show me who I was before
Where  I fell short
Hang it over my head
But I’m not the same anymore
One  thing’s for sure
The  shackles have fallen
So I’m showing shame to the door
Make  no mistake
I’m a slave, to nothing

What have you been a slave to in the past? A slave to a bad habit? A slave to a label someone put on you, and it stuck? A slave to lies that told you you’re a nobody with nothing who will get nowhere? A slave to a mistake you made that has haunted you in every new relationship and new season of your life?

The shackles have fallen, you don’t have to stay there. You have been set free and you never have to be a slave to this again.

Throughout scripture we read of slaves who God led to freedom. We read of the innocent imprisoned, then walking right out of where they were, free from what had once held them prisoner, into the life God created them for. We read of those who were on the wrong path having an encounter with Jesus that changed the entire trajectory of their lives.

I believe these stories are abundant in scripture because it’s OUR STORY. Every one of us have been slaves to something. All of us have been held back by someone or something. Each of us have been on the wrong path somewhere in our journey. That’s ALL OF US. The enemy tries to convince you you’re some kind of epic failure beyond repair, oh girl, you’re not a standout on the list of screw ups, my list is long too.

Romans 3:23 says “ALL FALL SHORT OF THE GLORY OF GOD.” We all have a past full of failures and a present full of struggles, and this is where we are attacked. This is where the enemy tries to chain us up and hold us back. Yes, it is true I have fallen short of the glory of God, but there’s more to this story. There’s more to your story. Read the next verse.

Verse 23 says “all have sinned and fall short of the glory of God”, then verse 24 says “and are justified freely by His grace through the redemption that is in Christ Jesus.”

The devil wants you to dwell on verse 23. You don’t measure up. You’ve fallen short. You aren’t good enough. But God says read on girl. Own that next verse as your truth.

Yes, you screwed up, and your most recent screw up may have been yesterday, but you are JUSTIFIED FREELY by the grace of Jesus. Justified. Declared righteous in the sight of God.

You are not who you used to be. Guilty is not who you are. You have been delivered, set free, justified!

Now, you don’t have to be a slave to anything.

God can redeem anything and everything. It’s his specialty. He uses the worst to create the best. The best story. The best delivery. The best redemption.

My favorite stories are the ones of the man who sat in a jail cell on drug charges, committed his life to the Lord, and now pastors a Church. The story of the woman who lived in shame for decades after her abortion, who now counsels young women in the same shoes. The story of the girl who struggled and overcame. The story of the husband and wife who cheated, separated, and were brought back together to be a powerful force in helping save other marriages. The story of the marathon runner who once couldn’t walk more than a block. She was once eating herself to death, felt shame in her own reflection, and truly believed she could never change … but she did. Now she stands in her redemption story helping others write theirs.

If the pastor wasn’t disqualified by drugs and jail, why would you be disqualified because of your shortcomings?
If the woman is no longer shamed by her abortion, why would you keep reliving your bad choices?
If the girl overcame her struggles, why wouldn’t you be granted the opportunity to do the same?
If the failed couple is now a powerful force, why wouldn’t your failure be used for something powerful too?
If the shame has been erased and the way has been made for one, the same has been done for you!

Jesus came to set the captives free. We are the captives, each held back by our own prison and chains. Held back from our potential. Restrained from our purpose. AND NOW SET FREE.

Now, live in your freedom. Rise up and leave behind the shame. Walk away from the lies that have told you you’ll never change and things will never get better for you. The truth is it isn’t so much about change as it is the return … you just have to come back. Back to who you truly are. Back to what God placed within you. Back to the story he has for you.

That’s your story. You’re free to live it now as a slave to nothing.

By Lonnie|May 22nd, 2020|Categories: Devotionals, Popluar|Comments Off on 603 A Slave to Nothing