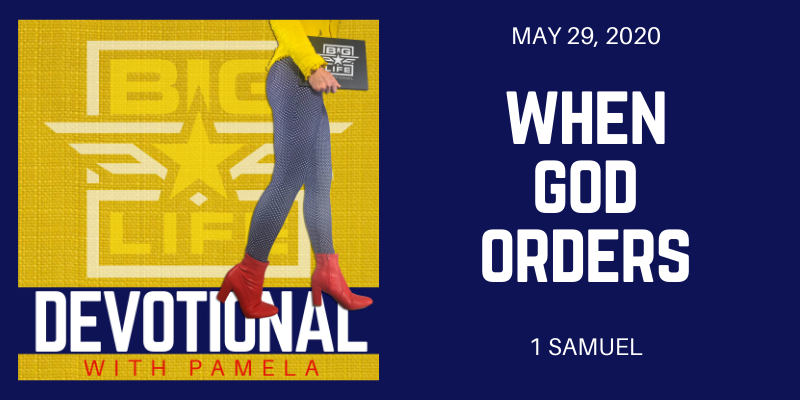 Whatever God orders, he pays for. Wherever he has a purpose, he has a plan, and provision for that plan. He sees the end from the beginning and the way has been made for all he desires.

What has he ordered in your life? What has he aligned for you? What did he specially design and equip you for? What seeds did he place within your heart as desires to lead you to fulfill the purpose he has for you?

Remember the scripture we often use to look at God as a genie in a bottle, Psalm 37:4 “God will give you the desires of your heart”, as if his only goal is to just make you happy. Nope, he’s not a genie in a bottle or a wish granter, he’s so much bigger. Don’t put God in that box or bottle. He can’t be contained there.

He is the AUTHOR of your desires. All that you love, everything you’re passionate about, all the things that make your eyes light up with delight, stir your heart, and light a fire within your soul, those were given to you by God. He has given you the desires of your heart, not as a wish granted, but as a purpose planted.

Understanding who you are, how you’re wired, how you tick and what drives you, is better understanding what God has ordered for your life. It’s how he has paid for his order.

If he ordered a Big Mac, then he would have the 5 bucks to pay for it. Not only that, but he would have provided the two all beef patties, special sauce, lettuce, cheese, pickles, onions, on a sesame-seed bun. (Now you probably think I’m like some sort of Big Mac loving gal to throw down those specifics like that. Nope, never eaten one … but remember my first job was a McDonald’s girl and I’ve made hundreds of those babies!)

The point is, God not only pays for what he’s ordered, but he provides for it. You can trust whatever God desires for you in your life he has paid for and provided for. He has equipped you, prepared you and paved the way.

David was born a Shepard boy. The little brother to big brothers much greater than him. But God had ordered more. God’s purpose for David was to be a giant slayer, warrior and a mighty King.

While David was out in his father’s fields caring for the sheep, God had sent Samuel to find the next king of Israel. Samuel, under the direction of God, went to Jesse’s house, knowing he had many sons and one had been chosen. When he met the first son, standing tall and strong, he was sure he had found his guy. He looked like a leader. But God told Samuel “Do not look at his appearance or at the height of his stature, because I have rejected him; for God sees not as man sees, for man looks at the outward appearance, but the LORD looks at the heart.” (1 Samuel 16:7)

Okay, not it. Looked like it, but God said not it. Then he discovers Jesse has one more son, the youngest son, the shepherd boy. The least likely of all, yet God’s chosen. When Samuel saw David, God confirmed “Arise, anoint him; for this is he.” (1 Samuel 16:12)

All David’s life, God had been preparing him for a greater purpose. Training him to lead and guide. Equipping him with experience and strength. God had orders for David, and he was ready to pay for his order.

God has orders for you too my sister. He has a purpose for you. Right now, at this very moment, you are being equipped. You are being trained for your future position. You may not look like the most likely person, you may not feel like the best pick, but when God says you’re it, YOU ARE IT.

Here’s where we get stuck. We get focused on OUR purpose. What’s my purpose? Have I missed my purpose? How do I fulfill my purpose? God show me MY purpose. We become threatened by others who have clearly discovered their purpose, while we’re still searching for our own.

The problem is we’ve taken ownership and claimed purpose as our own, tying it to our identity, value and worth. When the truth is, it’s not about YOUR PURPOSE, it’s about GOD’S PURPOSE.

God, what is YOUR purpose? God, what do YOU want to do? God, what are YOUR plans?

When seeking God’s purpose over our own, there’s one important thing we must do: BE AVAILABLE.

Will you be available for God’s purpose?

But, because God ordered it, it was paid for. David was equipped and with just 5 small smooth stones as his weapon, he took down the giant that held everyone else in fear.

All David did was show up and make himself available.

David wasn’t sitting questioning his purpose. Remember, that’s where we get stuck! Imagine if David would have been overwhelmed with concern over his purpose, dwelling on how taking care of sheep wasn’t fulfilling and seemed to be leading nowhere. He would have missed his big shot.

But all God is asking of you is to be AVAILABLE.

The author of Psalm 37:4 “God will give you the desires of your heart”? That would be David. Yes, he knew God had surely given him the desires of his heart. All he had done was as a result of what God had first placed within him. It was God’s purpose! It was God’s order, and wow did God ever pay for that order in supernatural ways. He always does.

Let’s turn our focus away from ourselves here. It’s not about MY purpose, it’s about GOD’S PURPOSE. He has plans and he is equipping people to fulfill those plans. The ones he uses are the ones who are available.

David was simply available. His heart was right, even when the rest of him wasn’t.

What could God do with your life when your heart is right and you’re simply available? MORE THAN YOU COULD EVER IMAGINE.

May God’s purpose become bigger than your own. May you simply be available for anything God has ordered, trusting fully HE WILL PAY FOR WHAT HE ORDERS.

By Lonnie|May 29th, 2020|Categories: Devotionals, Podcast|Comments Off on 608 When God Orders