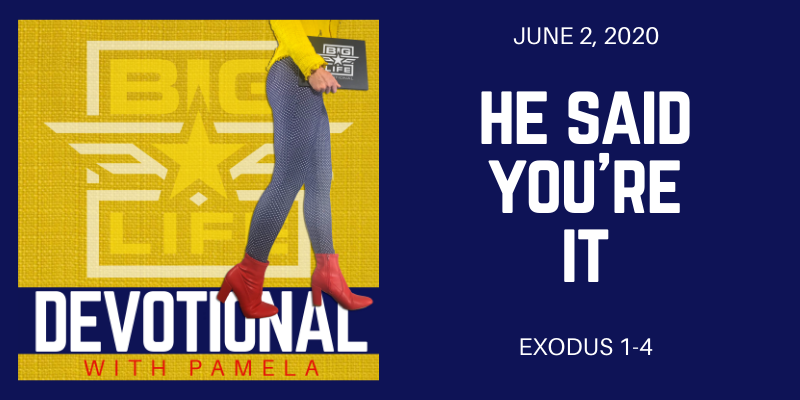 You have been chosen, hand selected, set apart by the almighty God to do his work. God had his eye on you this entire time, preparing you for a time such as this. A time for you to be who he created you to be. A time for his power and his love to work through you.

Will you rise to the challenge? Will you believe he has chosen you, and will you dare to take the next bold step on your journey knowing he will equip you as you go?

In the first 4 chapters of Exodus we read the beginning story of a man named Moses. This was the man chosen by God to lead an entire nation of people to freedom. A man whom God chose to do miracles through, which we still talk about today. Remember the parting of the red sea, yeah … God did that through Moses.

It’s easy for us to hear about this chosen man and believe he really must have been something special. He must have been so favored, so richly blessed, so talented, to have been chosen for a task such as this. But in reality, Moses was anything but confident. He didn’t know what God had placed within him … and maybe you don’t either. You’re just waking up and going through your days totally unaware of the setup God has been working on for you and in you.

How quickly we dismiss ourselves from being the person God would choose to do something through. We slip back, we hunker down, we play little, assuming God could never do something big through us.

But that’s not how our God works at all.

No, God comes into the most humble of beginnings, the most unlikely of families, cuts through every shortcoming, overcomes every mistake and failure and says YOU ARE THE ONE I HAVE CHOSEN.

YOU ARE NOT A LESS THAN. BECAUSE OF JESUS YOU ARE A MORE THAN … MORE THAN ENOUGH!

Moses was born into chaos. A hidden pregnancy, an illegal baby put into a basket to float away on the river, then found and adopted by a young Egyptian woman who loved him. He grew up under disguise, unable to reveal who he really was, because who he really was, was an Israelite. Moses was a “less than” among the “better thans”.

Have you ever felt like that? Like you’re somehow less than everyone else and you have to pretend to be somebody you’re not to be accepted. You carry this deep dark secret, fearful if others really knew who you were, they wouldn’t like you.

May I remind you God knows exactly who you are, he knows every detail about you and he still chooses YOU. It’s not about who you are … it’s about who HE IS, and who he is making you through his power at work within you.

But what if you’ve failed? I mean really, really screwed up. Can God use a screw up?

Moses made a big mistake. He killed a man out of anger, then he hid what he had done by burying the body in the sand. But he didn’t get away with it. Rumor started to spread of what Moses had done, so he ran to the wilderness and hid. Ashamed of what he had done, knowing it was wrong, he couldn’t go back. All this time, God had his eye on Moses. Read his story and see how God provided for him at every turn, even in the wilderness, even after he had done so wrong. God didn’t give up on Moses. He was using everything in his life for a purpose … the purpose of bringing him closer to being the person he created him to be.

We assume the process of becoming who we were created to be will look more like success. We’ll rise up, we’ll get the promotion, we’ll be highly favored and richly blessed. We’ll be recognized and praised. Oh, perhaps for a select few it happens that way. But most of us are like Moses. God works through chaos and failure to forge us into the full potential of who he had in mind when he created us.

Think about that … what have you been rescued from? Where did God come get you? What has he pulled you out of? An unfathomable childhood? A relationship you should have never been in? An addiction? Woah, the work he has done to save you.

Or maybe you’re more like me and you feel God didn’t really have to come rescue you from much of anything. Life hasn’t been that hard. Wow, we have no idea what God saved us from that never even touched us! Threats he thwarted before we were harmed. We owe him everything!

Now, don’t let his efforts be wasted. He wants to do something in your life and THROUGH your life.

Exodus 3: 8 God said “I have come down to rescue the Israelites..”

Okay cool, God is going to do something! But how does God work? He works through us!

Are you searching for your purpose in life? Are you ready for your mission? Understand it comes through the fire. Are you waiting for God to do something? Remember, he works through you.

If you want your mission, stop playing it safe. Stop waiting for the comfortable, easier option to appear. Living the life you were created for isn’t going to be easy, it is going to be highly uncomfortable, and anything you’re currently lacking will be provided when you’re on your way.

There through the flames of the burning bush, God gave Moses instructions to go and speak to the Egyptians to set the Israelites free. But you see, God was asking Moses to do the one thing he felt inadequate to do. He asked him to speak.

Moses had a speech problem, he couldn’t speak well. And yet God is telling him to do the very thing he couldn’t do. Isn’t that the way God works? He doesn’t call the equipped, he equips the called. This is how His power shows true. You may not already have what it will take, but that’s no excuse, God will provide it as you go. You’re delaying your journey, taking inventory of your shortcomings and God is saying GO, I WILL EQUIP YOU.

In that fire, God promises Moses he will work miracles and he will do what only he as God can do, all Moses has to do is go and be obedient. And the same is true for what God is wanting to do in your life and through your life. He has the miracles lined up, that’s not a problem. All you need to do is drop your excuses, stop feeling “less than”, that’s not serving you. Get over your past failures, God sure has. And understand that God will supply every single thing you will need to do exactly what he is calling you to do.

God called the man who couldn’t speak, the man who had created a real mess out of his life, the man who had always felt like a misfit and a less than, to save an entire nation of people, and walk through the parted seas on dry ground. That’s who God chose.

And he has chosen YOU to do something too. He’s equipping you for the journey.

This is how our amazing God works, and he is working in you.

By Lonnie|June 2nd, 2020|Categories: Devotionals, Podcast|Comments Off on 610 He Said You’re It