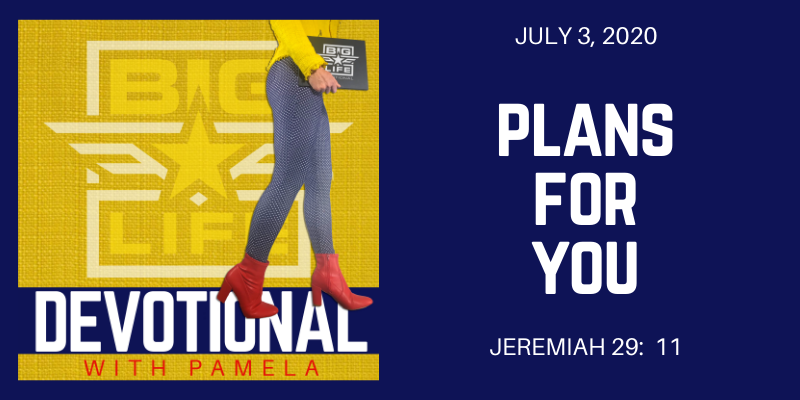 There’s a difference between a wish and a plan. A wish is a thought without action. A plan puts that wish into motion with a path to make it possible.

God has more than just good wishes for you. He has good PLANS for you. This means he doesn’t just wish goodness for you, he has it in the works. He has it arranged. He has the way made. It’s in store.

You know if you order something today on Amazon Prime and it shows in stock, it’s on it’s way. You expect delivery.

God’s plans for you are in stock and on their way. You can expect delivery my sister.

“For I know the plans I have for you, declares the Lord. Plans to prosper you, not to harm you. Plans to give you hope and a future.” Jeremiah 29:11

And whatever God plans, HE CAN MAKE HAPPEN. Who can stop the Lord? Who can out power him? Who could possibly get in his way, delay him, detour him, or defeat him? NO ONE.

Isaiah 14:27 “The LORD of Heaven’s Armies has spoken— who can change his plans? When his hand is raised, who can stop him?”

So imagine this, the Lord of Heaven’s Armies, the one who has angels following his command, the one who controls all of heaven and Earth, has good plans for YOU and his hand is raised over you.

I have good wishes towards you. I truly wish nothing by the best for you. But honestly, my wishes don’t change your life, do they? I don’t have the power or influence to change your future.

But imagine the president of your company calling you today and saying, “I’ve noticed your work, and I have good plans for you.”

Wow, would you get excited? Immediately you would envision promotion and window office. A total breakthrough in your career. All because the boss has good plans for you.

Imagine Jeff Bezos, the owner of Amazon and wealthiest man alive at a worth of 116 billion dollars sending you an email today and saying, “Your name came across my desk, and I have a good future for you.”

You would probably pee a little! Oh my goodness, what could this mean? The house on the hill without a single worry again. All because the rich man has good plans for you.

So how is it you’ve read the words of the creator of the Universe, the owner of all that ever existed, the one who holds the whole world in the palm of his hands, the one who makes the sun to rise and the earth to spin, the one who gives you the very breath in your lungs, and you’re not phased?

HOW IS THIS EVEN POSSIBLE?

How has your entire world not been shaken with this word from God? He has good plans for you!

God is the boss. He is the richest of all. Anything he wants to be done, can be done. If he tells a mountain to move, it moves. If he wants the ocean to stand on it’s end, those waters will part. If he wants water to turn to wine, you should get your cup ready. If he wants little to become more, it will be so. If he wants donkeys to talk, their lips start moving. It’s all in scripture. The proof is there.

And he is the one who has good plans for you!

Someone who can TRULY make a radical difference in EVERY way, knows your name, knows exactly where you are, knows every detail of your life and he has good plans for you.

Shouldn’t that give you hope for your future?

So why didn’t you wake up this morning absolutely moved by his plans of prosperity and goodness for you?

The only possible reason is because you’ve dismissed yourself.

Somehow you’ve heard these words from the Lord, and you’ve assumed that can’t include you. Not here, not now, not in this world.

You think God is limited now for some reason? You think God is cornered by 2020? You think he’s too busy taking care of other problems? Oh, you’ve put God in a box. You’ve limited his power. You’ve assumed he’s running short on time or resources.

He is here and he is working, girl get out of his way!

Last night I fell asleep listening to this beautiful song by Bethel Music & We the Kingdom called “Dancing on the Waves”. These words grabbed my soul and eased my worries. My prayer is they will do the same for you.

I’m reaching out, I’ll chase you down
I dare you to believe how much I love you now
Don’t be afraid, I am your strength
We’ll be walking on the water, dancing on the waves

Look up and lift your eyes
The future’s open wide
I have great plans for you, oh, yes, I do
Your past is dead and gone
Your healing has begun
I’m making all things new, watch me do it

May you fall into his arms today. May you dare to believe just how much he loves you. May your soul hear him say “I have great plans for you, oh, yes, I do.” And may you be so bold as to believe it, and partner with him in those plans.

That’s it, be a partner with God in his great plans. He has plans to prosper you. Plans to give you hope and future. Be his partner and step into those plans, and never dismiss yourself again.

By Lonnie|July 3rd, 2020|Categories: Devotionals, Podcast|Comments Off on 633 Plans For You