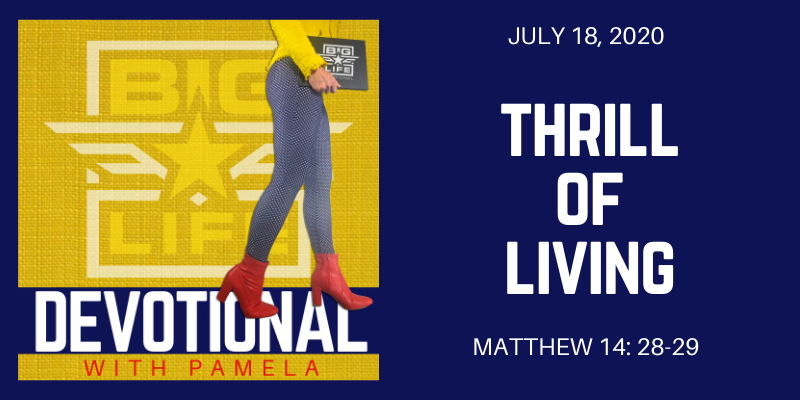 There’s an 80’s song by John Mellencamp that starts by says “A little story about Jack and Diane, two American kids growing up in the heartland.” You know it? What’s the chorus? “Oh yeah, life goes on … long after the thrill of living is gone.”

Gosh, has the thrill of living gone for you and now life just goes on? You’re not looking forward to anything, not hoping for better, and have nothing exciting coming your way? So you just woke up to another Friday which will kick off another summer weekend where the thrill of living has left the room. Dang girl, we gotta do something to shake that up.

Today, I’m jumping out of an airplane. Legit, I’m flying 15,000 feet into the air, opening the door, looking down at the Southern California coastline, and stepping out. Why? For the THRILL OF LIVING.

Peter was hand chosen by Jesus to be one of his closest friends. Not only in his inner circle, but this was the one person who Jesus said he would build his Church on. Jesus chose him. What was it about Peter that Jesus loved so much? This man was impulsive and wishy washy. He was the one who denied Jesus 3 times.

Now here’s what I blows me away about our Jesus; He knew Peter with all his faults and shortcomings would screw up. He knew Peter would deny him before he ever chose him and said “follow me”, but he chose him anyway. He saw right through his faults to his fight. Peter had a fight for life in him and that’s why Jesus chose him.

He was the one, who after Jesus died and life “goes on”, who wouldn’t let the thrill of living go too. He knew this is the rock on which I will build my Church because this one has a fight in him.

Where’s your fight? Your fight for living. Not just surviving, not just going through the motions and getting through, but living, truly living. Girl, you’ve gotta fight for that. Fight for the thrill of being alive and do the things that make you breathe in life deeper.

Peter truly breathed in life. He said yes to every opportunity that came his way, and as a result, he was the only one we know of to ever walk on water with Jesus. This was his thrill of living.

We read of Jesus walking out on the water to the disciples who were in a boat in the middle of a storm. In Matthew 14: 28-29 Peter says “Lord, if it’s you, tell me to come to you on the water.” “Come,” he said. Then Peter got down out of the boat, walked on the water and came toward Jesus.”

Notice the order of events. It was Peter who was seeking the thrill, then Jesus gave the invitation. Peter’s desire for more living gave him the opportunity to do something totally remarkable. Peter is essentially saying, “Wow, Jesus that’s so cool what you’re doing, I want to do that with you!” And Jesus’ response, “come on then!”

I wonder what thrilling thing you and Jesus could be doing if you just asked? I think Jesus loves to say “come on then!”

Imagine sitting in that boat and really wanting to speak up and ask if you too could walk on water, but being too afraid. Imagine missing your opportunity. Maybe you don’t have to imagine too hard, because it’s a whole lot like your reality. You’ve been watching others step out and do thrilling things, but your life seems to have just gone on long after the thrill of living has gone.

Hey, don’t be Jack and Diane. Get out of that boat while you have the opportunity. When you ask Jesus, he may just say “come on then!”

My heart is racing as I think about strapping on that parachute today. This is a moment I’ve literally been dreaming about for 20 years. It’s thrilling and exciting. And it’s terrifying. I know there will be several moments of “what the heck am I doing?!!!” And likely a few moments of “I don’t want to do this anymore.”

That’s the thing about thrilling moments in life, we often skip out on them because they’re scary as heck. But isn’t that the point?

Seriously, the only reason you jump out of the airplane is to feel the intense rush of excitement because it’s scary.

What happened to Peter as he’s walking on water with Jesus? He got scared. When he got scared, he started to sink.

Getting scared is part of it my sister. You can’t avoid everything that scares you. If you do, you sure will be missing out on a whole lot of amazing opportunities in your life.

There will be times in life when you start sinking. Jesus allows that. He allows the fear. He allows things to be out of your control. He allows your failure. But he’s always right by your side to save you. Always.

Don’t sit in the boat and watch everyone else do the things your heart desires to do. Sitting there causing the thrill of living to be zapped. And guess what, life goes on whether you’re thrilled about it or not.

If you’ve lost your thrill, get it back. Do something that scares you. You know what happens when life takes our breath away … we start breathing in life deeper. We never feel more alive than when we’re breathing in deeper, thrilled by living.

There are countless opportunities for more living today. Seek them out. Jesus is saying “come on!”

Your desire for living will present opportunities. And when Jesus says come, girl GO!

By Lonnie|July 17th, 2020|Categories: Devotionals, Podcast|Comments Off on 643 Thrill of Living