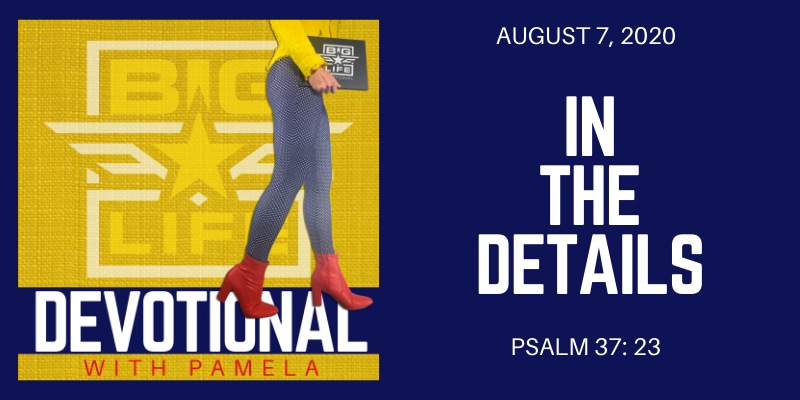 Some people are detail oriented, and some people are like me. I jump out of the plane and then consider if the parachute was buckled tight. I start driving, then think about which direction I should go. It’s often the other way. The details make a difference. A minute turn in the direction of an airplane is the difference between landing in New York versus Florida.

It’s said the devil is in the details, meaning a small glitch can cause huge problems. The tiniest of overlooked steps can create a colossal mess. Have you ever tried to put together a piece of furniture from IKEA? One bookshelf includes a 17 page instructional guide for assembly. Ask me if step 32 was important when the dang screw holes won’t match up on the final piece. Yes, yes it was. Details. The devil is in the details.

Now that may leave you saying, hold up a hot minute there sister, are you saying God brought this disaster? Are you saying he is responsible for this catastrophe? He orchestrated this mess? No, although he is not the originator of everything that crosses your path and touches your life, he allows it so he can use it.

Can you imagine how absolutely frustrated the evil one must be? He conspires his evil plans and plots his destruction. Satan shows up with his most wicked works, attacks us where we are weak, then God steps in and uses it all for something good instead. Dang he must be frustrated. He meant to take you out a long time ago. His intentions were to sideline you, but then God stepped in and used that personal attack on you for goodness. Devil, you should give up already … you are outmatched!

Some things happening in your life right now are still in the messy stages of progress, and God is allowing the mess because honey he knows how he’s going to work it all together for something so much better in your future. Are you willing to let God work those details? Are you willing to lean into him in the middle of the unknowing, trusting he actually DOES know what he’s doing?

Last weekend some of my very good friends were floating on a river. They ended up at an unintended stop along the river where they didn’t want to be. But God was in the details of having them exactly where he wanted them to be for a divine purpose. A 15 year old girl was hung under a branch, stuck underwater. And there was this family at this random spot at that exact moment to save her. And it couldn’t have just been anyone, it had to be one beastly young man who was the only one big and strong enough to break the entire tree that had her pinned. It had to be another young man who was trained as a paramedic to revive her lifeless body.

Against all odds, 3 days later, this beautiful blonde hair 15 year old girl woke up in the hospital fully functioning with one heck of a story to tell. All made possible by a family who just happened to be on the same river that day, stopped in a spot they had not intended. What are the odds of that? GOD IS IN THE DETAILS.

Psalm 147: 4-5 “He counts the stars and calls them all by name. How great is our Lord! His power is absolute! His understanding is beyond comprehension!”

Psalm 37:23 “The Lord directs the steps of the godly. He delights in every detail of their lives.”

God knew you would be exactly where you are today from the very beginning of time. He knew right here, right now is what he could best use to take you where he has for you next. He knew this detail of your journey is the perfect preparation for the next. He looks at you with great care, and he directs the details of your life with great power.

Isn’t it reassuring to know his great care comes with great power? He CAN make it happen for you. He CAN bring exactly what you need floating down the river right to you at exactly the right time.

He is directing you. He is taking great delight in every detail of your life. Lean into him today and trust where he’s taking you. Right here is exactly where you’re supposed to be. Maybe it’s because right here is what God always had planned for you, or maybe it’s because God said ‘well, that’s not what I had planned, but I like it and I can use it’, so here you are!

May you open your eyes wide to the details of your life today, and see God at work in every one of them. Because he is. Oh, he is!

By Lonnie|August 7th, 2020|Categories: Devotionals, Podcast|Comments Off on 658 In the Details