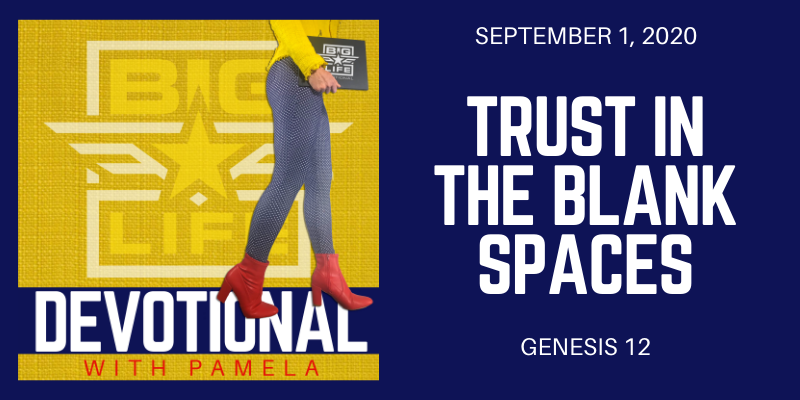 You know what makes me uncomfortable in a conversation? Pauses. Moments of silence. I fumble to fill those pauses with words. It’s as if I have a personal mission to never allow silence when I’m in a conversation. Do you do this as well? Are you uncomfortable in those moments of dead air? I suppose it makes me a really good podcast host because I always have something to say. You know, now that I think about it, you’ve never once spoken a word back to me here … I do all the talking. Yeah, that’s because I’m a space filler.

In those empty, blank spaces.

In those spaces we simply can’t fill.

Those spaces left so uncomfortably blank.

Filled with silence and unknown. Filled with step one but no sight of step two. An instruction to go, but no word of when we will come back. There’s just a blank space. A space we try so desperately to fill … but the only sufficiency is God. It’s his space, and he intentionally leaves it blank.

In my life it seems I’m only aware of my purpose on the other side of it. I can look back and connect the dots. Oh, now I see how God perfectly aligned that connection for that opportunity so I would be here at this time and seemingly stumble right into that. At the time it all just looked like blank spaces, but there were dots. Dots aligning and connecting. I couldn’t even imagine what God was doing, I just had to be willing to show up in the blank spaces and trust he was working to connect the dots.

Don’t you know that’s what God is doing in your life right now? He’s leading you into these empty places with blank spaces. Open ended questions of which you don’t have the answers. Mountains you don’t know how to climb. And just like those pauses in a conversation bring uncomfortable moments of silence, we must be willing to be uncomfortable. These are spaces we can’t fill on our own. Sit in it. Wait for it. Trust God is doing something only he can do. He hasn’t forgotten you in this blank space where nothing seems to be happening … he’s connecting dots to your destiny.

I love the story of Abraham. His entire life is a story of blind faith where God continually led him into blank spaces, and when Abraham followed God worked. In Genesis chapter 12 God speaks to Abraham and says “Go from your country, your people and your father’s household to the land I will show you.” That’s how the story begins. Leave everything and everyone you know. Go. I will show you. You don’t know where you’re going right now. You don’t know how you will get there or how long it will take, but I will show you. Abraham go. Step right into this blank space of the unknown.

As he is traveling, the Lord appeared to Abram and said, “To your offspring I will give this land.”

Now here’s what’s important to know about this. Abraham was 75 years old. He and his wife were unable to have children. They have no offspring. Yet as God is taking them to this unknown place, after leaving everyone they knew and everything they had, he says “hey, this land you’re walking through right now, I’m going to give all of this to your children.”

Yo wait … God, what? We don’t have kids. Where have you been the last 50 years as we’ve tried to get pregnant. It’s impossible. The time has come and gone now. Sarah’s an old woman past the childbearing years, I’m an old man and things don’t quite work the way the used to … so what do you mean ‘to your offspring I will give this land?’

Sometimes God just doesn’t make sense does he? God you say you will make all things work together for my good, but this doesn’t look real good right now. You say you will never leave me nor forsake me, but I don’t see you anywhere in the middle of this. You say you guide me in the way I should go, but I straight up have no idea what to do next.

Dots you don’t see are being connected here.

Did he always get it right? No. Remember they became inpatient and had another younger woman first bare Abraham a child. Read the story in Genesis 16, it didn’t go so well. This was their attempt to start connecting the dots on their own. God was being silent and silence is so uncomfortable. So they filled the blank space on their own, then there was a mess to clean up.

Oh what messes we create when we fail to see God is working even in the silence.

You’re in the middle of a blank space. Find peace here. Trust God is working for you.

As you continue to show up and do all you can do, trust God is doing what only he can do. And it may not happen today … it may not even happen this year, but eventually you’ll look back and you’ll fully understand the purpose of this blank space. You’ll see God’s divine plan in it all.

Trust it. Trust the silence. Trust the unknown and uncertain. Lean into the empty spaces you don’t understand and let God guide you in his ways.

By Lonnie|September 1st, 2020|Categories: Devotionals, Podcast|Comments Off on 675 Trust In the Blank Spaces