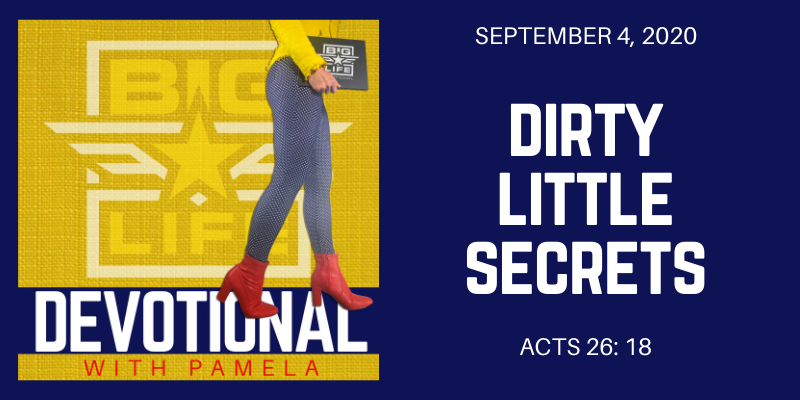 Darkness is the absence of light. Whatever we keep in the dark has power over us. Whatever is brought into the light is subject to the power of Christ Jesus.

What have you been keeping in the dark? Yip, we’re going there today. We’re cutting the chase and getting right to it. What have you still been hiding? Understand it is those hidden things that hold you back from stepping into the life God has available to you. This is what continues to cause problems for you. This could be why things continue to get worse. We think if no one knows about it then we got away with it, but the truth is it’s been eating you up on the inside.

Understand this, the enemy works in the darkness. Those things which you have hidden away are a playground for the enemy. He plays in the darkness. He destroys lives in secrets. Acts 26:18 says “open their eyes and turn them from darkness to light, and from the power of Satan to God.” While Satan works in darkness, God works in light.

I was working with a teen who had made a series of bad choices. These bad choices became an area of darkness in her life where guilt and shame ate at her. The enemy played in this darkness to convince her she was too far gone and could never recover from her mistakes. She attempted suicide. God saved her life. With her attempted suicide some of her secrets came to light, but not all. There were still some things she just couldn’t confess to. Some unspeakable things she still held inside. And this is where the enemy continued to work. As long as she kept those secrets inside, Satan had a foothold in her heart and mind, whispering his lies and destroying her life.

However, the moment she shined the light of God on those areas of darkness and no longer lived in those shameful secrets, she was set free. When there was no more darkness in her life, the enemy had no place to hide. Strongholds were broken. The chains which once held her in shame were immediately loosed when she no longer hid these things within.

No matter how hard we try to be good, if there is darkness in our life, hidden secrets we’ve never confessed, there’s an open door for the enemy to slip in and reside. His lies will fill your mind. You will feel hopeless and depressed. You will be anxious and overwhelmed. You will feel condemned and not good enough. All while God is saying, “here I am, shine my light on that darkness and the enemy will flee.”

I’m not sure what you may or may not have been hiding inside. But I know you’re hearing this today for a reason. It may be so that you can find the courage to banish that darkness today and confess this area of your life for the first time. Will it be hard, of course it will be. Will you find every possible reason why you can’t, oh you bet! That’s just the enemy putting up one heck of a fight not to be evicted from his comfortable corner of darkness in your heart. But trust me when I say, you don’t want him there. He’s been holding you back entirely too long. You have a BIG Life you were created for and it’s time to make it happen and you can’t do it with this darkness looming inside.

Or maybe today you’re listening because you need to be armed with this knowledge to help someone else. Someone you know and love has been hiding things in guilt and shame and this darkness in their life is robbing them of their potential. They have been held back, settling for a life far short of what they were created for. Would you allow God to use you as an agent of change to help open their eyes and turn from darkness to light? Would you help free someone from the power of the enemy and unleash the power of God in their life?

Many years ago I read a book that changed my life. At the end of every chapter was a challenge to implement the lessons just learned. One such challenge has stuck with me forever. You had to think of a very specific lie you had told, then be so bold as to confess the truth to that person and apologize. Oh goodness, I wanted to play dumb like I had never read the challenge. Every ounce of me wanted to excuse myself from that one. I mean I’m a good person, I shouldn’t have to do this to justify myself. As I delayed it started eating at me. Suddenly it was all I could think of. I had told a lie. I lied to my Dad when I forgot Father’s Day and told him his gift must have gotten lost in the mail. So silly and foolish. Yet it ate at me. So I finally went to the store, months after Father’s Day had passed, bought him a gift, mailed it and called him. I confessed my lie. I cried. He laughed. And gosh did I ever feel better.

This is where Satan gets in our head with his lies. This is where he works. Darkness. The only answer is to banish that darkness by bringing the truth and light of God into every corner of your life. Hold nothing back. Nothing. No more secrets. No more shame. You don’t want that in your life.