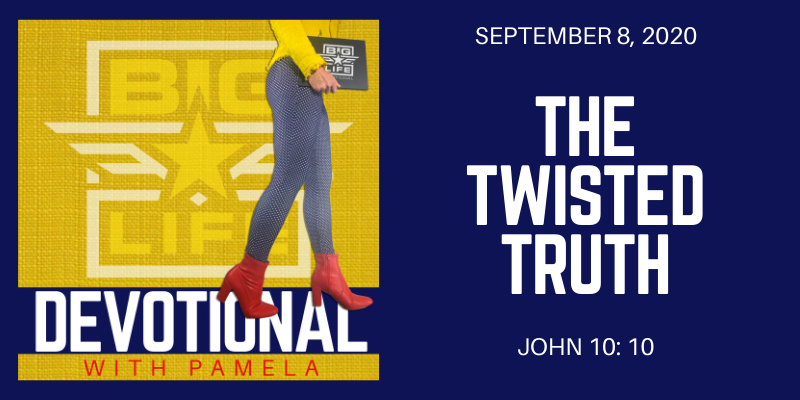 How hard would it be to convince you the sky isn’t blue and the grass isn’t green? You are absolutely certain about these things, so trying to change your beliefs would be nearly impossible. When you’re sure of your truth, it’s difficult to be swayed in a different direction.

But, when you’re unsure and when your truth is a little shaky, then you can be easily convinced of something different. Something false. Something twisted.

Know when Jesus says in John 10:10 “The thief comes to steal and kill and destroy …” this is what he’s warning us of. He’s warning us of Satan’s evil twisting of your truth.

His greatest work of deception isn’t a blatant lie, no he would surely be caught. Instead it’s a twisting of truth that sounds just good enough to believe. And when we believe this twisted truth, this contortion of what God said, the thief comes right in to steal, kill and destroy.

Stealing our peace. Killing our dreams. Destroying our potential.

How did it all begin? A twist of the truth which we believe so easily.

In fact, that’s how every sin began. In the Garden of Eden, Satan appear to Eve as a serpent and he questioned her truth. God had told Eve they could eat the fruit from all the trees in the garden, all except one. And here comes that slimy, sneaky snake with a question. “Did God REALLY say you must not eat from ANY tree in the garden?”

Satan knew exactly what he was doing. He was twisting. As he twisted the truth, Eve became uncertain of what God had said and moments later she was eating the apple that changed the world.

And I wonder where he’s done the same to you?

You know who knows scripture better than you? Him. The serpent. The enemy. The thief that comes to kill, steal and destroy. He knows it so well he can twist it and you never even catch him.

3 different gospels tell us of Jesus being tempted by the devil. Luke 4, Matthew 4 and Mark 1 all give the account. How did he do it? He twisted scripture and tried to trick Jesus. He didn’t make up a bogus lie, he just twisted the truth.

But Jesus knew the truth with absolute certainty, so he couldn’t be tricked.

We must know our truth, God’s truth about who He is and who he created us to be so the enemy can no longer trick us into believing otherwise.

When God says he is for you and not against you, do you believe it? Or have you allowed the enemy to twist that truth with stipulations of checking boxes and following impossible rules to earn God’s grace and mercy towards you?

I detect a twisted truth here.When God says he has good plans for your future, do you believe it? Or have you allowed the enemy to twist that truth with reminders of all you’ve missed in the past, regrets of what you have done and haven’t done, and in the end you believe God DID have good plans for you but now it’s too late. You’re too far gone. This is beyond repair without enough time to change it.

I detect a twisted truth here.When God says it is a sin to lie, do you believe it? Or have you allowed the enemy to twist that into being okay with your lies as long as they don’t hurt anyone … or as long as you don’t get caught. One little lie turns into more lies to keep your cover, and before you know it your truth has become so twisted you’re not sure how to undo this tangled web of deceit. Now, you stretch the truth and impulsively say things you don’t even mean because it’s your habit. It’s who you are. And you’ve accepted it.

I detect a twisted truth here.Oh how the enemy works in these dark corners of deceit and piece by piece he destroys lives.

How does one become a heroine addict? Does it happen overnight? No, it’s first a friend who smokes pot, so you smoke a little. Then it’s a party with a pill that makes you feel good and everyone else is doing it, so you do too. Then it’s a hit of this and a drag of that, why not a shot of what he’s doing too? And one day you wake up laying in your own piss wondering how in the world your life went so wrong.

You believed it. You believed that little twist on the truth that there’s nothing wrong with a little bit of something bad. You believed one time wouldn’t hurt anything. But an open door to the enemy is still an open door. He will barge his way into your life and wreck havoc. His aim is to kill, steal and destroy and no one does it better.

So sister, know your truth. Know what God says about you. Know your potential as sure as you know the sky is blue and the grass is green. Then when the enemy comes knocking on your door dealing his crack of ‘you’re just not good enough’, ‘you’re not worthy’, ‘something is wrong with you’, ‘it’s too late for you’, ‘you will never change’, and ‘it’s okay if it’s not hurting anyone’, you slam the door in his face!!!!

Don’t dance with the devil my sister. He’s here to destroy you.

Study God’s word. Seek His truths. Know who he is and what he says about you. Believe absolutely NOTHING else. Entertain NOTHING else. Stand firm on his word and allow no twisting of your truth.

What have we allowed entry into our lives that needs to be banished now? Lord, help us see what the enemy has twisted.

By Lonnie|September 8th, 2020|Categories: Devotionals, Podcast|Comments Off on 680 The Twisted Truth