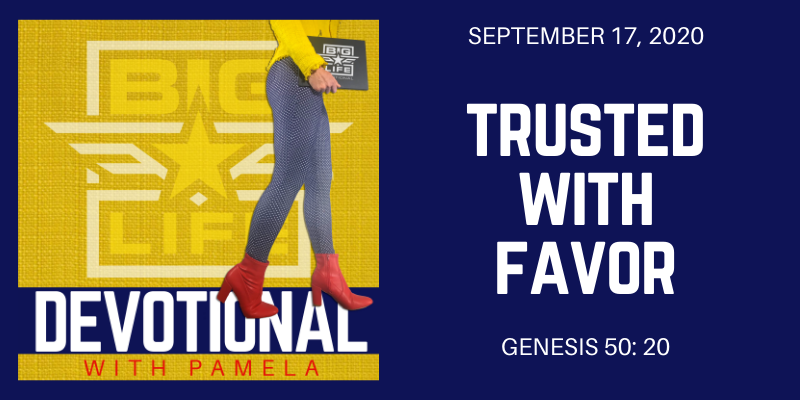 Can you be trusted with FAVOR?

I think of favor as God taking a personal liking to you. He chooses you, picks you out of the crowd and says “You, I like you. I pick you.” And when God blesses you with favor, nothing can stand in your way!

Have you ever watched the game show “Let’s Make a Deal”? Members of the audience dress in crazy costumes hoping to catch the eye of the host and be picked for a chance to play and win. They wave their hands, they jump up and down, they show off their flashy costume knowing the host is about to pick someone and they just hope it’s them.

The story of Joseph gives us the perfect example of HOW to be trusted with favor. God chose him, picked him and always showed him tremendous favor which caused others to like him. But that doesn’t mean life would be easy for Joseph.

He was favored by his dad, so his brothers got jealous and sold him into slavery. As a slave, Joseph found favor with his master and was put in charge. While in charge, he was falsely accused and put into prison. In prison he found favor with the warden and put him in charge once again. There he was noticed by Pharaoh the King, and was given rule over all of Egypt.

Time and time again as things went bad, God showed his favor towards Joseph and caused bad things to become works for good.

No doubt, he had God’s favor on his life and it came in the form of other people liking him. Other people continually chose Joseph and put him in charge. Genesis 39:21 says “The LORD was with him; he showed him kindness and granted him favor in the eyes of the prison warden.”

Yes, even with God’s favor, Joseph was in prison falsely accused. We assume God’s favor means smooth sailing and instant success. No sometimes God’s favor means unfair, unjust and unseen things happening to you, and God using it all for good.

Joseph was in prison and God’s favor didn’t miraculously break him out of prison. No, God’s favor simply made the prison warden like him. Maybe you’re stuck in a bad situation right now, maybe not prison, but a situation where you feel you can’t do what you want to do and everything is against you. Well I want to tell you God can give you favor right in the middle of it. He may not get you out of it tonight, but he can change things. The right people can take a liking to you and the tables can turn. That is favor.

But first, you must be able to be trusted with favor.

After all that happened to Joseph, HE NEVER GOT BITTER. He never set out to get even. In fact in Genesis 50:20 he looked at his brothers, the ones who started this whole domino effect of disaster by selling him into slavery because they were jealous, and he said “You intended to harm me, but God intended it for good to accomplish what is now being done, the saving of many lives.”

When you can give your best effort even when nobody is watching, then you can be trusted with favor.

When you keep doing the right thing even when you won’t receive praise for it, then you can be trusted with favor.

When you love and give without strings attached, then you can be trusted with favor.

And here’s the thing about favor, when God takes a special liking to you, you not only get blessed but everyone around you gets blessed.

In Genesis 39 we read about Joseph working in his master’s house. His master saw that God favored him and caused everything in his hand to prosper, so he began to favor Joseph as well.

Now remember, that certainly didn’t mean Joseph’s life would be easy. Remember all he went through. But time and time again God repaid him for everything he lost, and when he did he gave him even more.

Why did everything in Joseph’s hand prosper? Because he had God’s favor.

Why did he have God’s favor? Because he proved he could be trusted with favor.

If you’ve grown bitter because of what has happened to you, realize you may be blocking God’s favor.

If you’ve grown lazy only given a half hearted effort in the things you do, realize you may be blocking God’s favor.

If you’ve given up because it was hard and others were experiencing success easier than you, realize you may be blocking God’s favor.

I know sometimes it feels like God is against you because things keep being delayed or things keep falling apart. But sweet daughter of the Almighty King, never forget GOD IS FOR YOU. And just because God is for you, as he was Joseph, doesn’t mean your life will be easy. It means no matter what happens, God will use it for good.

Your job isn’t to figure this all out. Your job is to refuse to get bitter here and keep doing the right thing.

God is watching you closely today. He wants to know if he can pour his favor on your life. Can you be trusted with his favor? Will you do the right thing and will you keep the right attitude?

By Lonnie|September 17th, 2020|Categories: Devotionals, Podcast|Comments Off on 687 Trusted With Favor