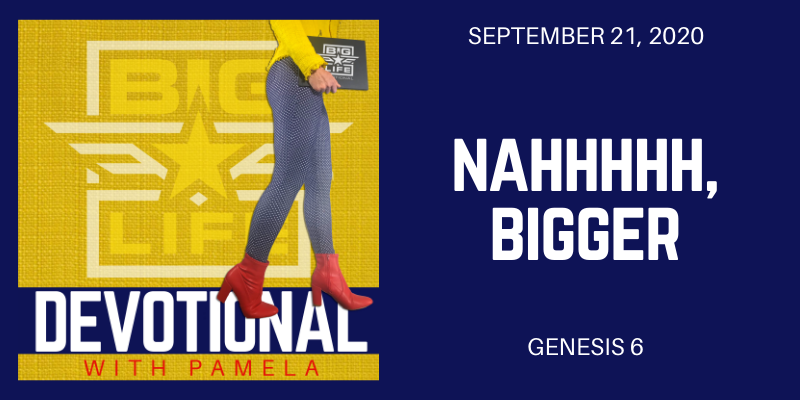 You’re thinking from a human perspective, but God is working on something bigger than you can see here. You’re putting limitations on this situation, while God in his unlimited power is at work in something bigger than you can fathom. You’re ready to settle in, surrender to resistance, give up the fight, while God is ready to push you on towards bigger places than you are right now.

God has been speaking 2 words to me: Nahhhhh, bigger.

What we imagine as our purpose is a row boat in comparison to the ark we were created for. But the truth is, when you’re without a boat and you know you need to get upstream, a row boat sounds pretty darn good. And we start praying for a row boat. We start trying to negotiate our way into getting it right now. And dang do we ever get disappointed when it doesn’t work.

Why isn’t this working? I’m talking about your specific situation. WHY ISN’T THIS WORKING FOR YOU? Why is it everything you try is met with resistance? Why is every door closed? Why is every answer no?

Oh yeah, because God is working on something BIGGER.

Honey, if that little thing comes together you’ll just settle right there and miss what God ultimately has for you. Hear him today … “nahhhhh, bigger!” This is row boat stuff you’re begging me for, but I made you for ark stuff.

Imagine being Noah. This is the man God choose to save his creation through. Only the people and the animals Noah was able to fit on the boat he built would survive the flood. So for 120 years, Noah worked on the same project, building this one boat … during a drought none the less.

That’s like my worst nightmare. A 120 year long project. I like 1 hour projects. I like starting and finishing something within the same day. I lose interest fast. I start chasing squirrels and forget why I am where I am. So I will often settle for little projects I can whip out fast while avoiding the bigger projects God designed me for.

What big project are you avoiding? What bigger plan have you been delaying by chasing squirrels? You’ve been busying yourself with little things as a distraction from the big thing God is calling you to. And today you hear it loud and clear, “nahhhhhhhh, bigger.” Dig in girl, what you’re being called to is going to take some time. Are you willing to stick with it?

I find this genuinely interesting, do you know what the name Noah means? It means REST. So, God chooses the man named for rest to build the largest boat that had ever been built, and he knew it would take him 120 years of non-stop work.

Did you know you can be at rest while working? Did you know it’s possible to do what needs to be done without being completely stressed out? This is the way God works. If you’re stressed in your work and always exhausted, perhaps you should ask him to help you work in his way. God has some BIG work for you to do, work that’s going to take a long time, so it’s important for you to discover the peace in this journey and learn how to work as Noah did. Your freaking out and dreading the work is totally optional. God has provided everything you need to do this and do it well. Your delaying however will not help.

Noah worked. He kept working. Scripture never tells of him stressing. Scripture never tells of him breaking down under pressure. It never tells of him complaining. You know what else we don’t see in the story of Noah … we don’t see him cutting corners. We don’t see him lessening God’s plan and settling for a little less. How tempting it must have been on year 80 to say, how about a 2 story boat instead of 3 story? How about we make this a little smaller than original plans to just be done already? Nope, he did just as God had told him without settling for less, and that was important.

Scientists estimate there were 35,000 animal species on Earth which needed to be saved. Multiply that by 2 so they could reproduce, and you need a boat that can hold 70,000 animals. Guess what scientists have also found? Based on the specific instructions and dimensions given by God for the ark, it would not only hold 70,000 animals, but it would FLOAT.

MORAL OF THE STORY: GOD KNOWS WHAT HE’S DOING, and what he is doing is BIG.

Invest the time and trust God will not allow a day of your effort to be wasted. Trust even when it seems you’re getting nowhere, God is working in the details for his divine plan in your life.

Maybe we’re struggling to believe because we’ve made our God small, and today he’s saying, “nahhhhh, bigger.” I’m bigger than you believe me to be. My power is greater than you’ve assumed. My plan is better than you’ve imagined. I say BIGGER!!!!

Let God out of that box sister. He will guide you if you ask him. He will strengthen you for your work today. He will provide every single thing you need. He is not limited. He is not backed in a corner. He is not stuck or frustrated. HE IS BIGGER THAN THAT.

Genesis 6:22 says “Noah did all of this, precisely as God had commanded.”

By Lonnie|September 21st, 2020|Categories: Devotionals, Podcast|Comments Off on 689 Nahhhh Bigger