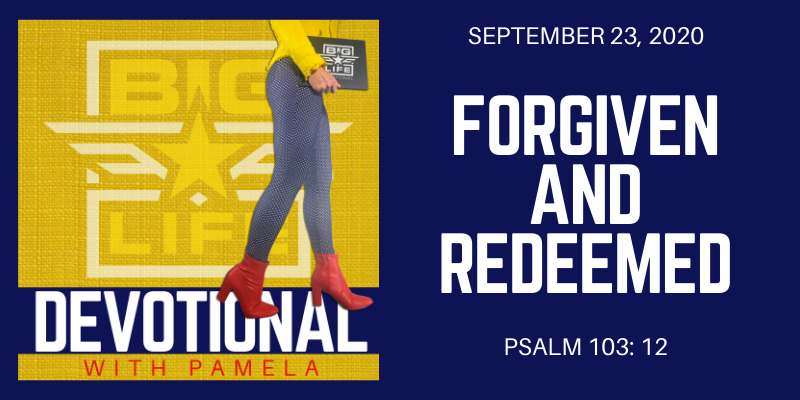 Do you carry a regret from the past? A burden from a choice you made, a wrong turn you took, a sin you pursued? You’ve asked for forgiveness, in fact you’ve prayed that prayer a hundred times. Yet you are still ashamed. Your dirty hands still feel unworthy to be lifted to the holy one.

Is that you? Hey, isn’t that most of us? Our past is stained. Maybe your shame is a public one others clearly see. When they look at you, you feel little. It’s as if all they see is your shortcoming. Your story is highlighted with this shame. Or at least that’s the story you tell yourself. What if that story is wrong? What if it is being re-written?

Or maybe this is a private hell only you carry within. Others don’t know of your guilt and regret. You’ve kept it hidden, begging God to take it away, yet it’s still there. It still eats at you. You’ll never overcome this stain of your past. It will be there to haunt you as an old woman. Or at least that’s the story you’ve been telling yourself for years. Again, what if the story is wrong? What if it too is being re-written?

Sin creates a distance. It drives a wedge that splits and divides. Even a forgiven sin does it’s nasty harm because this is where the enemy plays. He hides out in the darkness of guilt and shame and he picks at scabs. You see, if he can’t keep you in your sin, he will at least remind you of it and make you feel worthless. So it’s time for some truth to be unleashed into this darkness.

Psalm 103:12 says “as far as the east is from the west, so far has he removed our transgressions from us.”

God has separated you from your sin. Your wrongdoing is not attached to you. The enemy tries to hang every single thing you’ve ever done around your neck like a noose, but may I remind you of your truth … God has removed it from you. Don’t go looking to pick it back up again.

Our human minds can’t conceive this. We struggle with imagining a God who sees it all and knows it all, and still loves us endlessly because we can’t even forgive ourselves. But remember, condemnation does not come from God. Romans 8: 1 tells us “There is no condemnation for those who are in Christ Jesus”, meaning the thoughts and feelings that tell you what you’ve done will always mark your life ARE NOT YOURS TO CARRY. That is not your truth.

Recognize feelings of unworthiness and shame for what they are … they are desperate pleas of darkness from a defeated enemy who wants company. Don’t give him yours.

Every time your past is brought up, it’s an invitation from your defeated enemy to come play little in life. You don’t have time for that!

You have been separated from your transgressions. Every offense, every sin, every wrongdoing, every failure and misstep has been removed from you. Climb a mountain and stand on the top with a greater perspective of the vastness of this world. Look to the east, over there are your sins. Now look to the west, you’re all the way over here. You’re not even in the same view. Separated as far as possible from that which has held you back. If your sin was a black stain, understand Jesus has made you white as snow.

Don’t fight this exchange. The transaction is complete, why would you keep going back to the store to see if there was a recall? Why keep checking the receipt? You are fully forgiven. Understand every time you bring up this same offense to God, layered with years of guilt and shame, God aches for you. He hurts wondering why his daughter whom he paid the ultimate price to set free is still playing with chains. Why are you revisiting old prison cells? Why are you dragging out those things which are no longer yours? GIRL IT IS OVER.

You have been set free. You have been separated from your past. God no longer sees that choice, that failure, that mistake when he looks at you. It’s as far as the east is from the west. You can quit bringing it up now. It’s not an issue. Hear this loud and clear, YOU HAVE BEEN FORGIVEN. Your guilt and shame has been bought and fully paid for, YOU CAN’T HAVE IT BACK.

He doesn’t endlessly nag and scold,
nor hold grudges forever.
He doesn’t treat us as our sins deserve,
nor pay us back in full for our wrongs.

God doesn’t nag and scold us. We do that. Any grudges against you are not God’s, they are yours. Oh if we could only understand fully what Jesus has done for us. If we could see even for a moment how God now sees us. He looks at you and he sees his son Jesus. As a believer and follower of Jesus, you are completely covered by him. All your wrongs are made right. His life was given so you could have yours. Not a broken, half-way, little life … no, a full, complete, whole and worthy BIG life. This is what you have available to you! You have not only been forgiven, but understand you have been redeemed. Fully redeemed. Redeemed means to “regain possession of in exchange for payment.” God has regained his possession of you. You are his! What stood to separate you from him has been paid for and removed as far as the east is from the west. Forgiven. Redeemed.

Now armed with this truth, what will you do with it? Will you finally stop beating yourself up over that thing in the past? Will you finally let go of the guilt and shame that was paid a high price for, and realize it is NO LONGER YOURS? Will you let the author of life rewrite your story? Give you a new title? Will you let him right all your wrongs and give you the life he desires to give you?

Don’t allow the enemy to pick at what God has given you. Don’t allow his darkness to dim your way. Don’t allow his whispered reminders to dwell in your heart and mind. GET BEHIND ME SATAN. Your lies have no place in my life. I am redeemed. I am whole. I am new. And I never have to question that again. It’s a done deal!

By Lonnie|September 23rd, 2020|Categories: Devotionals, Podcast|Comments Off on 691 Forgiven and Redeemed