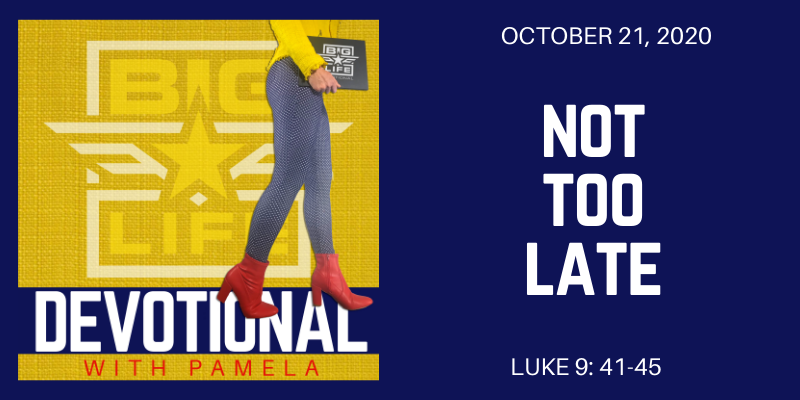 What is God doing in your delay? How is he working in your frustration?

In Luke chapter 9 we read the story of a desperate father seeking Jesus to save his little girl. There are many stories of healing in the Bible, but something interesting happens in the middle of this particular story which is so applicable to our own stories. As I read from Luke 9: 41-55, notice the interruption. Look for the delay and the frustration in the seemingly worst timing.

“A man named Jairus, a leader of the local synagogue, came and fell at Jesus’ feet, pleading with him to come home with him. His only daughter, who was about twelve years old, was dying.

As Jesus went with him, he was surrounded by the crowds. (Okay, so this desperate man has gotten the attention of Jesus and he must have felt great relief because now Jesus is going with him. They’re heading in the right direction.)

Then it says: A woman in the crowd had suffered for twelve years with constant bleeding, and she could find no cure. Coming up behind Jesus, she touched the fringe of his robe. Immediately, the bleeding stopped.

“Who touched me?” Jesus asked.

Everyone denied it, and Peter said, “Master, this whole crowd is pressing up against you.” (Imagine the disciples are like, yo Jesus, we’re on a mission here. We’re on our way to save this dying little girl, you don’t have time to worry about who in this huge crowd touched you. Hundreds of people have brushed up against you. Let’s go. We don’t have time for this delay!)

But Jesus said, “Someone deliberately touched me, for I felt healing power go out from me.” (Oh snap, Jesus knew! You see there’s a difference between bumping into Jesus and intentionally reaching out to him. That difference is life changing. I have to wonder, have you just been bumping into Jesus by listening to these devotionals and occasionally throwing up a obligatory prayer, or are you intentionally reaching for him? Are you here seeking him today? Because if you are, power is going out from him! Life changing power. Chain breaking power. Healing power. Restoring power. Renewing power. All these people in the crowd were bumping into Jesus, but his power was only released when someone deliberately touched him. Girl, reach out!)

It goes on to say: When the woman realized that she could not stay hidden, she began to tremble and fell to her knees in front of him. The whole crowd heard her explain why she had touched him and that she had been immediately healed. (Okay understand this woman is telling Jesus her life story. ‘Well Jesus you see 12 years ago I got sick. I went to the local doctor and he said take this pill, and I did for like 5 days and nothing happened. So I went back and he put me on another pill. Then Jesus, I broke out in the hives. Oh it was itchy and I was miserable ya know. So I saved up all my money and went to the doctor across town that my neighbor recommended. And let me tell you what he said … Her whole life story was being told here and remember who is waiting on Jesus still? Jairus, the father who is desperately trying to lead Jesus to his little girl. His need is urgent. His family is in crisis. He had Jesus going in his direction, now he’s delayed because Jesus in all his patience is standing there listening to this woman’s life story. Imagine how he must have felt standing there, waiting.

Then Jesus said to the woman who had been sick for 12 years “Daughter, your faith has made you well. Go in peace.”

While he was still speaking to her, a messenger arrived from the home of Jairus. He told him, “Your daughter is dead. There’s no use troubling the Teacher now.”

It was too late. Jairus was desperately seeking God for this miracle, he thought he was making progress when Jesus was coming with him. He got his hopes up that things were about to change, then Jesus was delayed. Now can you imagine, this father is now discovering that while he’s watching Jesus heal someone else, his own daughter is dying. He had to watch someone else receive their miracle while he was still waiting on his.

Maybe this is where you are today. You’re praying for your miracle and everyone around you seems to be getting theirs while you still wait.

You’ve been praying for a baby for years and you’re surrounded by all these girls getting pregnant who didn’t even want another baby.

Single ladies, you’ve been praying to meet that man, and darn it if half your girlfriends didn’t get engaged this year. You just want to gag!

Mothers of wayward children, you’ve watched other families being restored and walls torn down, while the walls separating your family only seem to grow taller.

You’ve been busting your butt with your business, begging God for a breakthrough, and while you wait you see the success of others.

Why is Jesus ignoring you? Why is he allowing these delays? Why do you have to stand there and watch others receive their answers while you still wait?

But let me remind you, Jesus has not forgotten you. He is not too late. This is not impossible for him.

What if in your delay, the story is just getting better? What if in your frustration, God is working up something for you that you simply can’t imagine? Will you wait for it? Will you trust that God has not forgotten or forsaken you? Will you believe what God has done for them, he will do for you? What he has done before, he will do again. What no one else can do, he can. Oh he will!

But here’s where we get tripped up … we believe God will do exactly for us what he has done for someone else.

While we’re waiting on our miracle and we see others receive theirs, we start thinking our miracle should look just like theirs. But God is writing a unique story for you. He will show up for you, he will do for you, but your answer may be totally different than my answer. Not because I’m better and you’re worse, I’m favored and you’re not, I prayed the right prayer and you didn’t … no, because God is working up his own kind of special for you. He knows exactly what is best for you and he knows when it is best for you. He knows the ending, you don’t. You just know the right here, right now in the middle of a frustrating delay when God seems to be responding to everyone else except you.

So let’s go back and see how the story ends. Jairus has been waiting on Jesus to come to his house and heal his little girl. They’ve been delayed because Jesus decided to heal someone else along the way and stand there listening to her life story. Now they get news the little girl has died and it’s too late.

But when Jesus heard what had happened, he said to Jairus, “Don’t be afraid. Just have faith, and she will be healed.”

When they arrived at the house, Jesus wouldn’t let anyone go in with him except Peter, John, James, and the little girl’s father and mother. The house was filled with people weeping and wailing, but he said, “Stop the weeping! She isn’t dead; she’s only asleep.”

But the crowd laughed at him because they all knew she had died. (Notice the crowd, they doubted and they laughed. The crowd may be counting you out too. They try to convince you it’s too late and you’re too far gone. The voices in your own head tell you the journey is far too long and you’re far too weak. But NOTHING is impossible for God. NO THING, and that includes your thing. You have the attention of Jesus here my friend. Will you believe the naysayers who tell you that you can’t? Will you believe the little voice that tells you you’re unworthy and incapable? Will you believe it’s too late and too far gone? Or will you refuse the bait of your fear and instead choose FAITH. Remember Jesus said ‘don’t be afraid. Just have faith, and she will be healed.’

You may have been watching a whole lot of other successes and breakthroughs as you wait. You may feel like God has forgotten you … BUT HE HASN’T. Your time is coming. Your answer is on it’s way. Don’t give up. Don’t walk away from this. You may have just gotten bad news, but Jesus is here today to say I’VE STILL GOT THIS!

Just when it seemed impossible, just when everyone else knew it was too late, just then Jesus took her by the hand and said in a loud voice, “My child, get up!” And at that moment her life returned, and she immediately stood up.

AT THAT MOMENT HER LIFE RETURNED.

Your moment is coming. A moment when the power of Jesus changes everything. Don’t be afraid, have faith here.

It’s not too late for you. This isn’t over. Jesus has not forgotten you. Your miracle is still on the way. Your life WILL be returned and you will get back up!!!

By Lonnie|October 21st, 2020|Categories: Devotionals, Podcast|Comments Off on 711 Not Too Late