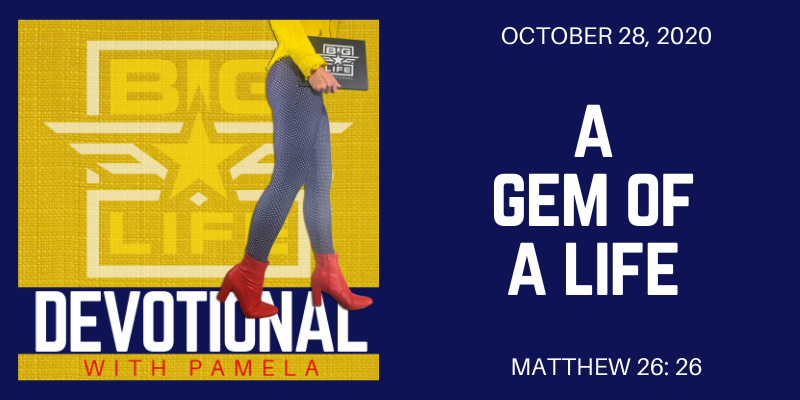 Yesterday, I did something absolutely, undeniably awesome … I walked on broken glass. My bare feet stepped on thousands of pieces of broken glass. I walked with confidence and power, as did many other BIG Life girls here at retreat with me. We not only walked across that broken glass, we sat in it and dug our feet down deep in it, even filling our pockets with pieces of broken bottles.

How were we able to do this?

Well, this wasn’t just any old broken glass. That glass had weathered the storm. That glass had tumbled countless times over many years, beat by the waves, until it became the beautiful treasure known as sea glass. Sought after gems.

On Glass Beach, tourists from around the world gather to see the treasures of this sea glass and collect pieces in the sought after colors of turquoise, blue and red. We were in awe of this beauty covering an entire beach. But in reality, we were really sorting through garbage. This was the water dump site of garbage from the 40’s, 50’s and 60’s.

Pure trash poorly disposed of in the ocean, now 80 years later here’s some chick who traveled across the country to hold a piece broken beer bottle and declare it as treasure.

What’s the difference between a broken bottle declared as garbage, and a sought after treasure called sea glass?

Over time, the tumbling in the crashing waves have worn the edges of every sharp piece of broken glass, making a smooth stone of polished glass. Without the tumbling and time, we were just standing in dangerous garbage.

Oh sister, you know that will preach!

I know you want to rush through to the other side of this. I know you want to get to the next season of life where this struggle is over and it’s fixed. I know, because I do too. But there’s something beautiful happening here in the tumbling, and this takes time.

Here where the waves are crashing over you and you feel beat down, understand the purpose. Understand WHY God is allowing this storm. He’s making something beautiful here. Something that will become so much more than it once was.

Something treasured. But the treasure only comes through the time and the tumbling.

Embrace this. This is the process of life. The unfolding of the treasure.

Your sharp edges are being smoothed here. This is the refining process only the crashing waves can bring. The storm is being used for more than you can imagine.

What if one day you will look at this part of your life that’s currently trashed in broken pieces, and you’ll be able to treasure it? What if the day will come when you’re glad it broke because after all the time and tumbling, you have something of value?

This is exactly what God does in our life. THIS IS EXACTLY WHAT HE IS DOING IN YOUR LIFE. RIGHT NOW. RIGHT HERE. He’s taking all that is broken and he’s smoothing the edges to create something beautiful. A real gem of a life.

Matthew 26:26 “Jesus took bread, and when he had given thanks, he BROKE IT and gave it to his disciples, saying, ‘Take and eat; this is my body.”

If God would allow his one and only son to be broken with a purpose, don’t you think he will allow your brokenness for a greater purpose? Only time and tumbling will reveal what he has planned for your broken pieces.

Will you trust the time and tumbling? Will you trust as the master smooths your sharp edges and reveals his treasures? You may have some brokenness created by man, but it’s being refined by God.

By Lonnie|October 28th, 2020|Categories: Devotionals, Podcast|Comments Off on 716 A Gem of a Life