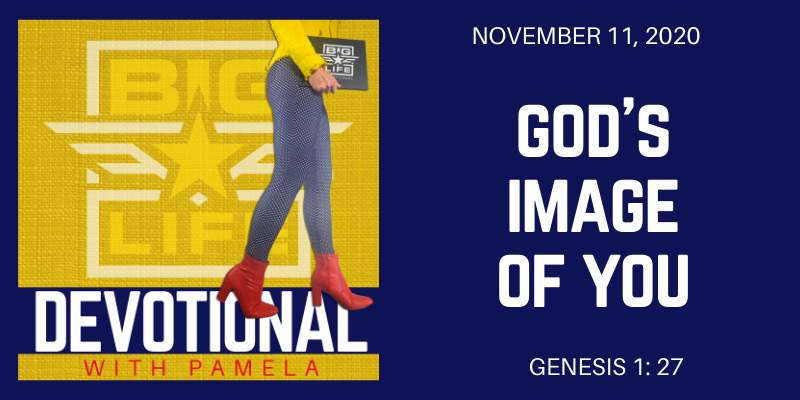 Before God made you, he imagined all you could become. He had a clear imagine of you at your fullest potential, then he went about forming you individually, equipping you with every strength, gift, talent, attribute, trait, and passion to one day become all he imagined.

You see when he made me, he added a bit of quirkiness because he knew one day that quirkiness would be needed right here! I fully realize many people listen daily just to see what comes flying out of my mouth. But while you’re creeping, guess what, Jesus is creeping in on you too! So creep on and just see what I say next, Jesus might just rub off on you!

Genesis 1:27 “So God created human beings in his own image.”

God created us with his imagination. He had an IMAGE of all we could be and then he formed us. He didn’t use your image of you, he used HIS image of you. Maybe those two images are a world apart. I wonder what’s different about God’s image of you?

Think about it. Before an artist creates, they have an image of what they want to form. An architect first has an image of what he wants to build. It is the image that first begins the creation.

And before God made you, he had an image of the woman you could become. Scripture says he knew you before he knit you in your mother’s womb. Before you even existed he knew you. How’s that possible? HE KNEW YOUR POTENTIAL. And it is your potential he saw when he began forming you.

Every detail of you was first imagined by God. God had an image of you, the BEST you, then he went about creating you in his own image.

Not your image of you. You see, you likely view yourself as a watered down version of who God sees. Isn’t it a good thing God didn’t create us based on our image of ourselves. No, he created us based on his own image.

What is God’s image of you? What does he see when he looks at you?

Contrary to the voice in your head which tells you you’re not good enough, God looks at you and sees his creation in process. He sees his masterpiece forming. He’s using every circumstance and situation to form you into the person he had in mind all along. He’s knocking off the lumps here and there to reveal the real you, the true you, the image of you he had from the beginning.

He’s shaping and forming you from the inside out and we all know the process of being shaped and formed doesn’t always feel good. It feels more like being squeezed into tight spaces, forced into uncomfortable positions, chunks of you breaking off, pieces of you crushed. But if we could only see for a moment what God sees.

If we could only see how every single thing, I mean EVERY THING works together for good. God uses it all. Even the very things which were meant to harm us, intended to set us back, God uses those things for a set up. And when God uses a set back as a set up, there’s only one thing we need to do … we need to step up. Step up and be who God created you to be. Begin living up to your potential.

I’m here to remind you this morning that there’s a whole lot more in you. There’s power in you that you’ve never tapped into yet. There’s strength within you that you didn’t know existed. There’s potential in you that only God knows about and if you were to get a full picture of that potential right now it would scare the crap out of you. And this is why life is only revealed one day at a time. You can’t handle the truth of all that remains in you currently untapped.

God creates with his imagination. Look at his creation. Sometimes I watch those Planet Earth shows and I’m mesmerized by the sheer beauty and creativity of our God.

Yesterday I climbed a mountain in Lake Tahoe and stood on the snowy peak looking out across the towering pine trees and the deep blue lake. It was majestic. So beautiful my eyes could barely take it in. And this is what God imagined.

Some time ago I sat on a sandbar in the middle of the ocean. I know it sounds ridiculous, but out in the deep waters where dolphins were swimming, was a piece of sand only a few inches below the turquoise waters, just inviting visitors to come sit a while and take it all in. God imagined that. It was first his imagination of this paradise that created it.

And somewhere in between the tiny seahorse, the unique porcupine, that majestic mountaintop and that beautiful sandbar in the turquoise waters … is you.

You. He sat and pondered you. He considered what he wanted your life to be. The impact you could make in this world. He imagined all you could do and become. And with that image of potential in mind, he began forming you.

And he’s not done yet. You’re still being formed. Today you’re being shaped in preparation to meet your full potential.

You were made in his own image. His imagination created you. And he imagined you perfectly. You are his masterpiece. Girl, he’s just not done with you yet.

By Lonnie|November 11th, 2020|Categories: Devotionals, Podcast|Comments Off on 726 God’s Image of You