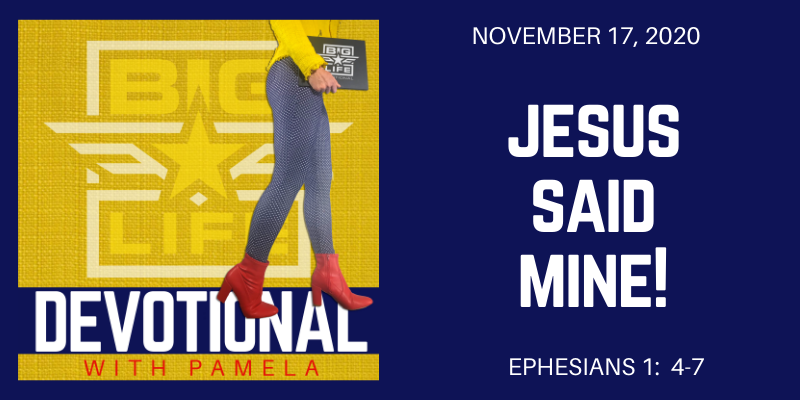 Do you remember being in middle school gym class and waiting to be chosen for a team? The coach would select 2 team captains, then those captains would take turns one by one building their own teams.

Now I’m not sure who came up with this system, but I’m here as a fully grown 45 year old woman to tell you, that is traumatizing! I still remember just hoping someone would call my name early. Hoping I would be chosen to be part of a team. But my value as an athlete was rarely recognized and I stood just waiting to be chosen because they kinda liked me.

For those of us who have ever struggled with an unhealthy need to be liked and chosen, I believe it could have started right there in 5th grade PE!

What if today, you’re being chosen FIRST? What if the team captain sees your value and worth and undeniably wants YOU on their team? How would you feel?

Before this world was even created God was thinking of YOU. He was thinking of you, loving you, choosing you. Yes, the creator of the universe wanted you and he placed you in the middle of his creation because you bring him great pleasure.

And this is what he wanted to do. God wanted to save you because you are worth saving. Your life is worth the sacrifice.

And THAT is how God sees you. Maybe that’s a far cry from how you see yourself, and if so, you need to take another look.

God purchased your freedom with the blood of his Son and that blood covers ALL your sins. Not just a little. Not just some. Not a select few, but all. All your sins have been covered.

What is the most shameful thing you carry around with you? You’ve been dragging the guilt of this sin like a stone tied around your neck, weighing you down, holding you back and limiting your potential. And listen to me, it’s NOT YOURS TO CARRY.

Oh it was your sin, no doubt. Your bad choice, your neglect, your mistake, it was you, but it’s no longer yours. On the cross the price was paid for you personally and every single one of your sins were bought. You have been forgiven. And what does our scripture today say? “This is what he wanted to do and it gave him great pleasure.” God wanted to pay the price for you. Jesus willingly did this for you knowing in advance every bad choice you would ever make.

Understand, this is what Jesus did for you. He showed up and bought that old hunk of junk that was littering your front yard and he hauled it off for you. He paid the price. Now it’s no longer yours. You have no right to go hunt it down and try to bring it back home. It’s not yours.

As my 3 kids went through those rough teenage years, this is a truth I had to remind them of. They’re going to screw up. They will make world class jacked up choices just like I did, and God knew that when he chose them. It didn’t stop him. In fact, it made him all that much more determined to save them because he knew they couldn’t do it on their own. Won’t you tell your kids they don’t have to carry around that guilt and shame any longer? They have been forgiven.

Oh to be chosen! To be valued and loved and wanted! All your life that’s what you’ve been wanting, and here it is.

You’re not left out, you’re called out.

You’re not passed by, you’re picked.

Jesus has called “MINE!” and he’s looking right at you. Why? Because you’re worth it!

In closing today, I will read our scripture again, this time from the Message translation (Ephesians 1: 4-7):

“Long before he laid down earth’s foundations, he had us in mind, had settled on us as the focus of his love, to be made whole and holy by his love. Long, long ago he decided to adopt us into his family through Jesus Christ. (What pleasure he took in planning this!) He wanted us to enter into the celebration of his lavish gift-giving by the hand of his beloved Son.

Because of the sacrifice of the Messiah, his blood poured out on the altar of the Cross, we’re a free people—free of penalties and punishments chalked up by all our misdeeds. And not just barely free, either. Abundantly free! He thought of everything, provided for everything we could possibly need, letting us in on the plans he took such delight in making.”

By Lonnie|November 17th, 2020|Categories: Devotionals, Podcast|Comments Off on 730 Jesus Said MINE!