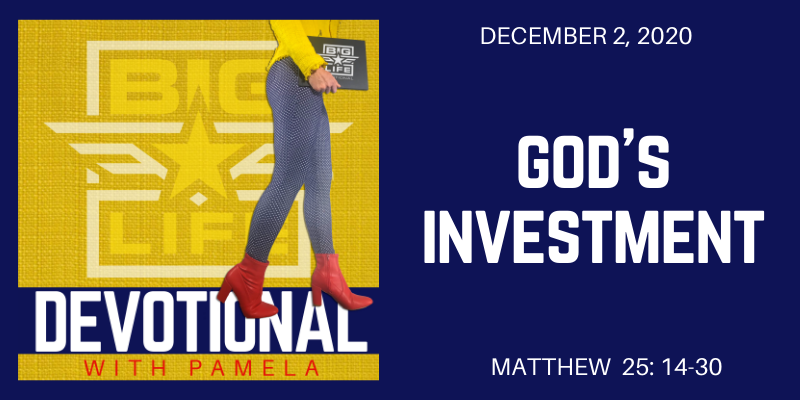 God made an investment in you. He intentionally invested potential within you, and he expects a return on that investment.

Is he getting it? What are you doing with what he has given you? How are you using what’s inside of you?

The truth is, we often short God on all he did for us. We belittle the enormous gift within us and dismiss all we could do and all we could be. Why is that? Why don’t we honor the gift?

I believe it’s because ultimately we’re scared. We fear failure. We fear judgment. We fear looking foolish. We fear screwing this thing up with the wrong choice and the wrong direction.

So here we are walking around as these prized masterpieces of God, carrying around a world of potential, living less than, little lives, while questioning our value and discounting our worth.

AND GOD ISN’T GETTING A RETURN ON HIS INVESTMENT.

Jesus tells a story in the bible about this exact thing. The story of the talents. I will read from The Message translation so it we understand it on today’s terms.

“It’s like a man going off on an extended trip. He called his servants together and delegated responsibilities. To one he gave five thousand dollars, to another two thousand, to a third one thousand, depending on their abilities. Then he left. Right off, the first servant went to work and doubled his master’s investment. The second did the same. But the man with the single thousand dug a hole and carefully buried his master’s money.

“After a long absence, the master of those three servants came back and settled up with them. The one given five thousand dollars showed him how he had doubled his investment. His master commended him: ‘Good work! You did your job well. From now on be my partner.’

“The servant with the two thousand showed how he also had doubled his master’s investment. His master commended him: ‘Good work! You did your job well. From now on be my partner.’

“The servant given one thousand said, ‘Master, I know you have high standards and hate careless ways, that you demand the best and make no allowances for error. I was afraid I might disappoint you, so I found a good hiding place and secured your money. Here it is, safe and sound down to the last cent.’

“The master was furious. ‘That’s a terrible way to live! It’s criminal to live cautiously like that! If you knew I was after the best, why did you do less than the least? The least you could have done would have been to invest the sum with the bankers, where at least I would have gotten a little interest.

“‘Take the thousand and give it to the one who risked the most. And get rid of this “play-it-safe” who won’t go out on a limb. Throw him out into utter darkness.’

Understand girls, our master has given us something. What has he given you? An investment of time, talent and treasures. What are you doing with them? I ask because sister, IT MATTERS. It matters what you do with what you have been given. The master will be returning and he will specifically ask you what you have done with what he invested in you.

If God gives you 84 years of life, he will expect you to do a whole lot of living in that 84 years. What will you have to show for it? What do you have to show for the years you’ve been given so far? How much living have you done? It’s easy to assume we will do more living in our later years and save up the anticipated returns for retirement. Ahhhhhh, don’t be so arrogant to assume you will be given that time. I’ve shared the true story of the man who worked hard and saved up all his living for retirement, then died of a heart attack the day after his retirement.

Whatever day you’re saving up your living for may never even come. Are you saving up for when the kids get older and life gets easier? Saving up for next year or next summer? Heck maybe you’re saving up for Christmas. Oh yes, that’s when you’ll show up as your best self full of joy. Crap woman, what if you don’t get that opportunity? What if your days are numbered and that number is far less than you imagined?

Will you arrive to the Pearly Gates of Heaven worn out or rusted out? Will you be worn out from all the living you did after using up every single moment you were given … or will you be rusted out from sitting and waiting, just thinking about all you could do but never really doing a dang thing about it? I have a feeling our Heavenly Father will be mighty ticked off by any rust spots on his girls. Don’t live and die a rusted out life.

I have a life manifesto and it goes like this:

I want a life that’s vibrant and beautiful. I would rather be worn out from living than rusted out from sitting. I want to wear bright colors and smile so big my cheeks hurt. I want to take risks and dive head first into things that take my breath away. I want to skid sideways through the Pearly Gates of Heaven with wild hair screaming,’woo-hoo, what a ride.’ And I want to make God giddy over giving this girl the gift of life.”

The truth is, most of us aren’t nearly as overwhelmed as we think we are. We’re actually underwhelmed. We’re bored with the way we’re living our lives. Somehow we’ve managed to take this wild ride called life and tamed it down to this monotonous series of tasks and lists of to-do’s and forgotten to actually LIVE.

In the story Jesus tells of the master returning after some time away and asking what each person did with what he had given them. If God called that meeting with you today and wanted to see exactly what you’ve done with the sum of your days, what would you have to show him?

What have you done with yours? You can find exactly how many days he has invested in you by going to www.daysold.com and entering your date of birth. Take a good look at your number then ask yourself WHAT DOES IT MEAN. Are you proud of what you have done with the time you have been given? How many days have you wasted and how many more are you willing to waste? Is today one of those days? One of those days where God will be missing his return on his investment of YOU?

God is expecting a return on what he has invested in you. What will you have to show him? He’s not interested in you playing it safe with this life. That’s why Jesus tells us this story. He is demanding better of you and I.

You count a dog’s life a different way than a human’s life. A dog’s year is equal to 7 of ours. They don’t live as long, but perhaps they don’t need to. They fit 7 times as much living into what they are given. Seriously, watch your dog. My dog Tank is always excited about life. He’s always happy. He literally smiles and puts his ears back when he sees the people he loves. He can’t contain his sheer excitement over waking up. His whole body wags.

It seems to me God sure gets a good return on his investment in my dog. I wonder if he gets as much out of me?

Stop digging holes and trying to safely preserve all you have been given. God’s not interested in you saving up days of unlived life. He’s not pleased by your playing it safe and sitting it out. He’s not impressed by your pristine state of proper-ness and spotless, unstained days. I have to believe he takes delight in you simply trying, even when you fail.

Honey, he didn’t give you this life to live it scared. You’re not here to tip toe through your days afraid of getting it wrong. Show up for your life BOLDLY as the person you were created to be. Go ahead and be seen, be heard, and fall on your face when you screw this thing up. To this he will say “Good work. You did your job well!”

God knows exactly what he put within you and he says IT IS ENOUGH. Now, make sure he’s getting a good return on his investment of you.

By Lonnie|December 2nd, 2020|Categories: Devotionals, Podcast|Comments Off on 741 God’s Investment