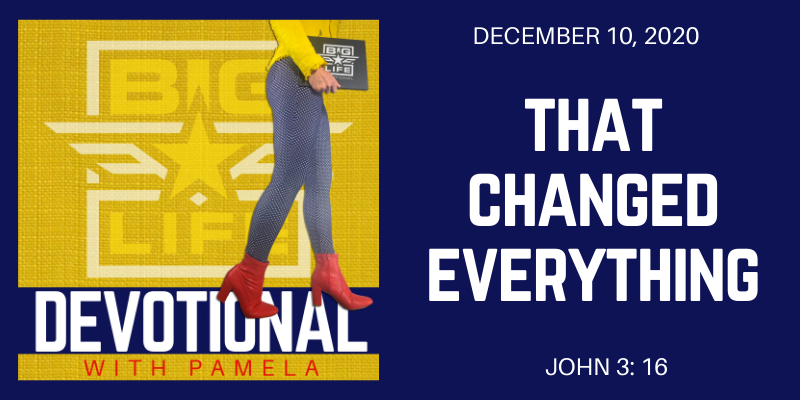 Today I will give you a behind the scenes look at the creation of these devotionals. An inside glimpse at what ALMOST became an epic and embarrassing blunder, but then there was a moment that changed everything.

So, I wake up early each morning. I put on my workout clothes and I glue on my eyelashes because, ya know, priorities. Then I sit in silence for 1 hour and I start typing. I’ll typically start with a little idea or inspiration and over the course of that hour God will guide me in creating a devotional to share with you. He is always faithful to show up when I show up.

And he has to show up because I’m on a timeline. After that 1 hour of writing, I start a broadcast with a live audience waiting to watch. A gathering of about 100 faithful girls watch me every morning as I record the podcast. They’re waiting for me to go live, so I can’t be late. There’s pressure to get each episode written and ready to record in one take, but it’s how God always shows up for me so I go with it.

Back to the almost epic and embarrassing blunder. It all started on Tuesday night. My husband and I were laying in bed and I was thinking about what Wednesday’s devotional might be on. I turned to Lonnie and I said, hey throw out a story from the bible for tomorrow’s devotional. He thought for a minute and then he said “Cain and Abel. You’ve never talked about them.”

I love a challenge and this seemed like a good one, so I ran with it. Yesterday morning I woke up right on time and I sat down with my one hour of writing with God and a devotional unfolded.

If you listened to yesterday’s episode, you know it totally was NOT about Cain and Abel. It was about Elizabeth and Mary being pregnant and Elizabeth’s baby being filled with purpose and he leaped when he came in contact with Jesus. Oh it was a good one and if you missed it, you gotta go back and listen.

But, here’s what you need to know … that was not my plan for yesterday’s devotional. NOT AT ALL. That was a last minute panic on my part with just 5 minutes to go before the live broadcast, because you see, the devotional I had written about Cain and Abel was totally unusable.

Now, here’s what I was working on yesterday, then you’re going to see where it all went wrong. Now listen closely because there’s the greatest twist at the end you’ve ever heard of!!!!!

Do you ever lay awake at night and question if you’re doing absolutely anything right? Mamas, do you ever wonder what the heck is wrong with your children and where have you gone so wrong in raising them? I was warned of sleepless nights when they were babies, but who knew sleepless nights would return when they became teens and they would continue long after that.

This devotional is for the mamas who didn’t sleep well last night. It’s also for my younger listeners who may be a source of a few restless nights for your mama. And all of us who look back and remember our own stupid choices at a stage in our life when we were sure we knew best.

Well let’s see, I think that covers all of us. Yes, we’re all here … now God, speak to us!

The story of Cain and Abel is found in Genesis 4. They are the first children to be born on Earth, the sons of Adam and Eve. They lived before the time of social media and public schools. Before the time of video games and mass distraction. So surely raising the two of them must have been easier. Times were simpler back then and there were a handful of career choices. Grow something to eat, take care of something to eat, build something to live in. Sons, grow up to be a farmer, a shepherd or a carpenter.

Cain grew up to be a farmer. Abel became a shepherd.

Their mama and daddy must have been proud.

Imagine how their Mama must have felt. Where did I go wrong in raising my boys? Why would my child make such a terrible decision? Why would he hurt our family like this?

Now I know this is an extreme situation, but maybe you’ve asked the same questions. Where did I go wrong? Why our family?

God punished Cain for his wrong doing with a curse that would keep his crop from producing a harvest and made him a wanderer of the land for all his days.

But that couldn’t be the end of the story. Nahhhhh, we know that from Adam and Eve came the lineage of Jesus. And because Cain was the only son left, that would clearly mean God redeemed him and used him for good to bring us Jesus.

When you have failed, understand your failure does not cancel his good plans for you. He can work with even the worst of decisions and self-created crappy circumstances. You are not dismissed from God’s plans for your life. The curse of your past and your family’s past will not continue.

Generations after Cain would come Jesus and God’s ultimate good plans for the every single one of us. But how many generations was it?

So with only minutes left to finish writing the devotional, I went to the all knowing Google and searched the lineage of Jesus all the way back to Adam. I always feel like throwing in numbers makes a devotional more powerful, but honestly I don’t know the numbers I just look them up.

77. There were 77 generations from God, then Adam and all the way to Jesus. Amazing. And God used this messed up man named Cain who killed his brother out of jealousy over his greater sacrifice to get there.

WRONG. No he didn’t.

I looked at the lineage. No where was Cain. It went God, Adam, Seth, and continued on with a series of really strange names until columns later there was Jesus.

Well holy crap … what the heck happened to Cain?

Oh yeah, remember, he was cursed. His sin brought God’s curse on his life and the good plans God had for him were now cancelled. He really did wander for the rest of his days and it’s believed all his descendants were cursed. Adam and Eve were given another son named Seth to replace the one who had been taken from them, and it was through Seth Jesus came.

Cain’s descendants were all wiped out in the flood. Yeah, that’s right … remember Noah? Noah was the 9th generation from Seth and he and his children were the only ones to survive the flood. Cain’s family was wiped out.

The curse had continued. No good came out of it. Sin entered and sin won.

Now you understand my panic? Everything I had written was leading to this sad sad ending of hopelessness.

I wrestled with this the entire day yesterday. How could that be the end of the story? My positive mind just couldn’t handle that negative truth. There had to be a way to spin it for good, but dang you can’t deny the curse that followed Cain and the ending for them all.

Then last night we laid back down in bed and I giggled about the almost epic and embarrassing blunder that devotional could have been if it were not for that last minute fact check on the generations. I laughingly told my husband to never do me any favors again by suggesting a topic because clearly there was a reason why I had never shared the story of Cain and Abel before … that was a disaster!

And then it hit me … please don’t miss this, because this is what changed everything.

Duhhhh, right? We know that. But for real. Jesus changed everything.

Why were the two brothers fighting? God favored Abel’s sacrifice of a lamb more than Cain’s sacrifice of crops. Cain became jealous of the greater sacrifice and killed him. Cain’s sin created a curse on him for the rest of his days.

But Jesus came as the sacrifice that changed everything. John 3:16 tells us “For God so loved the world, that he gave his one and only son, that whoever believes in him should not perish but have eternal life.”

The curse ends with Jesus. The payment of sin was covered with his blood.

So this is absolutely, undeniably TRUE after all …

When you have failed, understand your failure does not cancel his good plans for you. He can work with even the worst of decisions and self-created crappy circumstances. You are not dismissed from God’s plans for your life. The curse of your past and your family’s past will not continue. BECAUSE OF JESUS!

When you accept Jesus, he cancels all your sin and he creates a way for God’s good plans for your life to continue.

And the same is true for your wayward child who kept you awake last night. Is that child covered by Jesus? Yes? Then the curse ends. God’s plans will prevail. It may be messy as heck along the way (speaking from experience), but God’s will for your child is not the same as Cain’s fate. Cain was cursed forever because of his sin.

Why? Because of Jesus. The ultimate sacrifice.

Ahhhhhh, and that’s what God wanted me to tell you about the story of Cain and Abel. That was a hot mess of a family feud that end really ugly … but Jesus changed that for us. And Jesus, well … he changed everything.

By Lonnie|December 10th, 2020|Categories: Devotionals, Podcast|Comments Off on 747 That Changed Everything