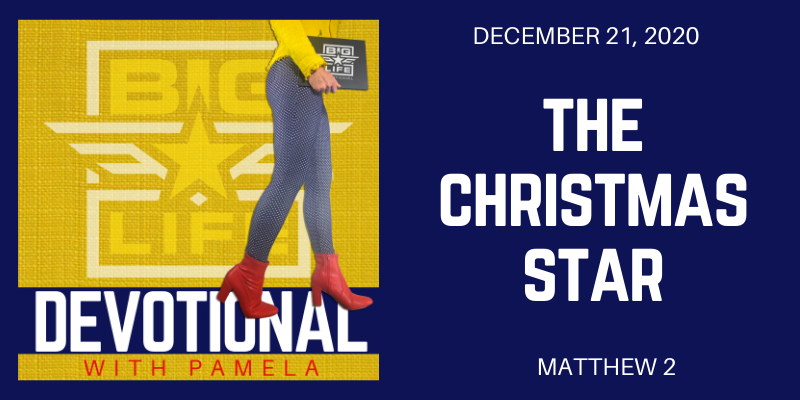 Tonight, something magical will be happening in the sky. For the first time in 800 years, the Christmas Star will appear.

Remember the star in the Christmas story? A star followed by the 3 wise men to find baby Jesus?

We read the story in Matthew 2:

“After Jesus was born in Bethlehem … Magi came from the east following a star to find Jesus and worship him. The star went ahead of them until it stopped over the place where the child was. When they saw the star, they were overjoyed. On coming to the house, they saw the child with his mother Mary, and they bowed down and worshiped him. Then they opened their treasures and presented him with gifts of gold, frankincense and myrrh.”

Who were these Magi bearing gifts and what was this star that led the Magi to Jesus?

These Magi are also referred to as the 3 wise men and we see them in the nativity scene. They were considered wise because they were actually believed to be astronomers. They studied the stars way before we had Google to tell us what is happening in the world. The star that led them to Jesus is believed to be a phenomenal event we refer to as “when the planets align.” Looking back at the patterns of orbit, astronomers have found at the time of the birth of Jesus Jupiter and Saturn aligned and created what appeared to be a super star in the night sky. Of course these 3 wise men who studied the stars knew of the uniqueness of this event and followed it.

Now tonight, for the first time in 800 years, the planets will once again align and be visible here on Earth! The Christmas Star that led those who were seeking Jesus will once again appear in our sky as Jupiter and Saturn align. Referred to as “the great conjunction”, this is a true phenomenon we can see with our bare eyes. Y’all for real, isn’t this what we needed to end this year? Who was praying for a sign? A sign God is still in control? A sign Jesus is alive? Well, here’s your sign!

To view this once in a lifetime alignment we call The Christmas Star, watch the sun as it sets tonight and there on the horizon you will see the brightest star in the sky. That’s it. That’s actually Jupiter and Saturn coming together in our view. They will be visible for less than 2 hours in our sky after sunset.

How absolutely phenomenal! It’s so easy for us to joke this craziness started when there was a full moon and a Friday the 13th and time change all at the same time like that was some bizarre event. Well, how bizarre is the aligning of the planets that we haven’t seen in 800 years, and it happens to be the star that led to Jesus?

I choose to believe God is all up in this! He’s in every detail here showing us the way.

In Matthew 7:7 Jesus taught us “Seek and ye shall find.”

The Magi, the 3 wise astronomers were seeking Jesus. They were literally using what they knew, the stars, to find him. And because they were seeking him, they found him.

Now, let us use what we have and what we know to seek him. All signs point to him. Hasn’t every path you’ve ever been on brought you right here to him? Yes, even the wrong paths, the bad choices, the missteps and mistakes we have made (especially those paths) led to Jesus. And here we are today using what we have and what we know seeking him. THIS IS WHERE WE FIND HIM.

When you gaze at the heavens tonight seeking to find the Christmas Star, remember Psalm 19:1 “The heavens declare the glory of God; the skies proclaim the work of his hands.”

Did God know all this year would hold? Yes. Did he know it from the beginning of time? Yes. And did he know this year would end with a sign of hope in the skies to remind us of our Savior? Of course he did. It’s been in the works for millions of years for this generation to see.

This is the week of Christmas and it begins with a sign. A glorious alignment of Jupiter and Saturn that led 3 men seeking Jesus to find him. May we be reminded of God’s mighty works and everlasting glory and seek to find Jesus here.

And if you really want to hear about the alignment of phenomenal things, we not only have the great conjunction of planets happening, we have a the Ursids meteor shower 2020 striking tonight, and the December solstice officially marking the the change of the season.

And if you’re seeking, it all points to Jesus! Seek him here and you will find him here. God’s glory and work is on full display for us in the skies.

Welcome to the week of Christmas … God’s just showing off for us now!

By Lonnie|December 21st, 2020|Categories: Devotionals, Podcast|Comments Off on 754 The Christmas Star