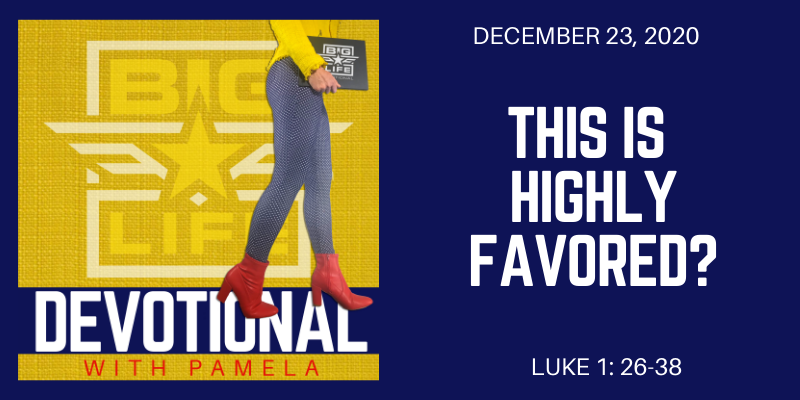 In the week of Christmas as we study the Christmas story, we learned yesterday that extraordinary things begin in very ordinary ways. Jesus, the savior of the world, the game changer of all game changers, came as an 8 pound baby born in the middle of a poorly planned roadtrip. Jesus entered this world small and overcame every ounce of sin there ever would be. What an ordinary entrance for the most extraordinary display of love.

And today we learn favor first begins with frustration. Sometimes being highly favored by the Almighty feels more like falling apart. Sometimes favor shows up on the scene by means of failure.

Favor doesn’t always feel like favor. I think of favor as everything you touch turning to success. Isn’t favor everyone absolutely adoring you? If you’re favored shouldn’t things happen quickly and easily with minimal effort? Wait … maybe we have favor all wrong. What if favor is the process of God’s greatest work in your life. Favor is being lead somewhere ridiculously good, but the route there may be a little rocky. Favor is all things working together for good, but first they’re going to fall apart.

Look at Mary. This young girl had a promising future. She had found her a good man, he had proposed and she said yes. She was planning her wedding and dreaming of her honeymoon. Then everything changes. All her good plans were turned upside down. What she imagined as her future was dramatically crushed when an angel shows up.

And in the sixth month the angel Gabriel was sent from God unto a city of Galilee, named Nazareth, To a virgin espoused to a man whose name was Joseph … and the virgin’s name was Mary. And the angel came in unto her, and said, Hail, thou that art highly favoured, the Lord is with thee: blessed art thou among women.

And when she saw him, she was troubled at his saying, and cast in her mind what manner of salutation this should be.

And the angel said unto her, Fear not, Mary: for thou hast found favour with God. And, behold, thou shalt conceive in thy womb, and bring forth a son, and shalt call his name Jesus. He shall be great, and shall be called the Son of the Highest … and of his kingdom there shall be no end.

Then said Mary unto the angel, How shall this be, seeing I know not a man?

And the angel answered and said unto her, The Holy Ghost shall come upon thee, and the power of the Highest shall overshadow thee: therefore also that holy thing which shall be born of thee shall be called the Son of God. And, behold, thy cousin Elisabeth, she hath also conceived a son in her old age: and this is the sixth month with her, who was called barren. For with God nothing shall be impossible.

And Mary said, Behold the handmaid of the Lord; be it unto me according to thy word. And the angel departed from her.

The angel says “Hail Mary, girl you’re going to have an unexplained pregnancy. Your fiance Joseph is going to want to leave you. People are going to talk about you and put you to shame and you’re not going to be able to explain this to anyone. Everything you planned has now come crashing down. Oh and all of this is happening because you are highly favored and blessed.”

While I never experienced a virgin pregnancy and found myself in a pickle exactly like this, I remember the day I was fired from my job. I was fired because I was pregnant and the company was being sold to a new owner who didn’t want one of the only employees to be 2 months from maternity leave. So they fired me. Bye bye now. Your work here has been greatly appreciated, now we need you to go.

Favor doesn’t feel like warm fuzzies and kitten cuddles with sprinkles. Favor feels like a girl with big plans for her life being told the unthinkable is happening to her and it’s going to turn her whole world upside down. This is favor. This is being chosen. This is being set apart.

Will you trust what God is doing right now in your life, even when it feels frustrating? Even when on the surface it looks like failure and 3 steps way back? Will you trust God’s words in Isaiah 55: 8-9 “‘For my thoughts are not your thoughts, neither are your ways my ways,’ declares the Lord. ‘As the heavens are higher than the earth, so are my ways higher than your ways and my thought than your thoughts.'”

THINK HIGHER MY SISTER. Here where things aren’t as you imagined and you’re highly uncomfortable and uncertain … think higher. HIGHER. (There’s a word for you.) God wants to take you higher now. It’s time to step into his good plans for your life, and you’re going to be stepping UP.

Look up now. Don’t look back at what was, that’s over. Don’t hang your head low in despair, darkness is down there and you don’t want to dwell there. Look up. Oh yes, Lauren Daigel is singing it now “Look up child!”

Where are You now

When all I feel is doubt?
Oh, where are You now
When I can’t figure it out?
Oh I, I-I-I, I hear You say
I hear You say
“Look up child”, hey
Look up child ….
You’re not threatened by the war
You’re not shaken by the storm
I know You’re in control
Even in our suffering
Even when it can’t be seen
I know You’re in control
My sister, look up. You are highly favored and blessed. Have faith God is in control here and he knows what he is doing. He’s leading you somewhere good. Look up, step up, and move forward.

Mary didn’t understand what was happening to her. What the angel told her seemed impossible and highly unfavorable, but she looked up. She looked up and said “I am the Lord’s servant, let it be.” AND IT WAS. She was chosen as the mother of Jesus. The blessed, holy one all future generations would honor.

But first it looked like a real mess. What crapfest is this? All my good plans have been wrecked. My name is being ruined. My reputation is questioned. And there’s a good chance my fiance is going to hit the road when he finds out I’m pregnant … but God, as you say. I look up and I trust you.

This is favor. This is faith to receive favor.

Will you have the faith to receive favor and not run from it?

By Lonnie|December 23rd, 2020|Categories: Devotionals, Podcast|Comments Off on 756 This Is Highly Favored?