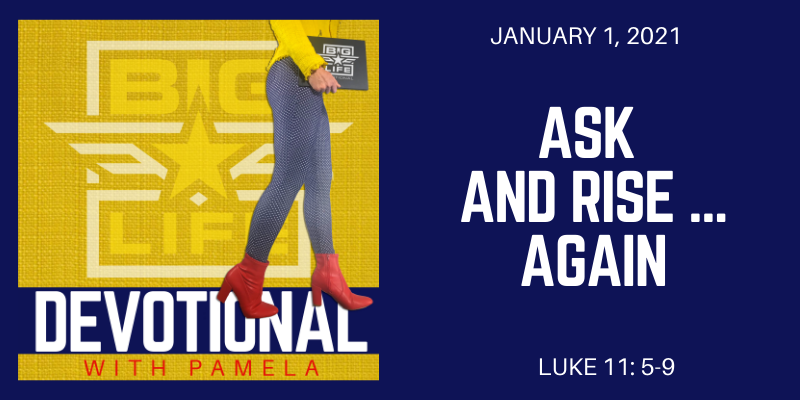 Have you ever not asked because the answer could be no? No one likes the answer no.

As a little girl, I loved chewing gum. Like it was nearly an obsession. My Aunt CC was the gum bearer of the family. She was one of those cool aunts who never had children of her own, so her mission in life was to spoil me. She always said yes to me. But still I hesitated to ask because I knew there was a possibility she may have run out of gum and had none to give me if I asked. So, here’s what I would do … at her house, I would wait until she was in the bathroom and then I would sneak into her purse and check for gum. I would never take it, just check it. If there was gum, I would wait until she came back in the room and then I would confidently ask, knowing for sure the answer was yes. I would never ask before checking the supply because I was avoiding a potential no.

Have you been avoiding a potential no, so you’ve never asked? You tip toe around fearing rejection, therefore never stepping into what you want. Girl, ask.

In case you’re checking supply first, your Heavenly Father isn’t running short on supply of ANYTHING. He has an abundance of every single thing you could possibly need or want. His answer is never “I don’t have enough, or I already ran out.”

Listen to me, GOD HAS WHAT YOU NEED IN STORE. It’s in stock. It’s available for shipment. Have you placed your order?

If you haven’t asked, you can’t be disappointed when you don’t receive. I mean seriously, I can’t be upset with Amazon for not shipping me a pair of size 9.5 Converse, because I didn’t order them. It doesn’t work that way.

You can be absolutely certain God has an abundance of all you desire and the storehouses in Heaven are full because a whole lot of his children simply aren’t asking.

Or maybe you asked, but then when nothing happened, you never asked again? Did you know when Jesus taught us how to pray, he gave a specific example known as The Lord’s Prayer, you know the “Our Father who art in heaven, hallowed be thy name …”, but maybe you’ve missed what he said immediately after sharing this prayer. Check it out:

Luke 11: 5-9 “Then he said, imagine what would happen if you went to a friend in the middle of the night and said, ‘Friend, lend me three loaves of bread. The friend answers from his bed, ‘Don’t bother me. The door’s locked; my children are all down for the night; I can’t get up to give you anything.’ But let me tell you, even if he won’t get up because he’s a friend, if you stand your ground, knocking and waking all the neighbors, he’ll finally get up and get you whatever you need. Here’s what I’m saying:

Ask and you’ll get;
Seek and you’ll find;
Knock and the door will open.
Why would Jesus tell us a story of knocking on a door in the middle of a night, waking everyone up, and persistently asking even when the answer was no the first time? BECAUSE JESUS WANTS YOU TO KNOW THE POWER OF ASKING AGAIN.

So, we know God’s supply is never threatened … he has what you need and want. It is available and it is possible. Oh yes it is sister! And now we know Jesus gave a direct example of persistence in asking.

You may have asked for something last year and it didn’t happen, but will you ask again this year? Will you be so bold in your faith to knock on the door of heaven again and place your order?

Now, what if Jesus ignores you? Oh wait, what … is that an option? Could Jesus just pass you by? Well, there’s a story in the bible about Jesus ignoring a woman who was making a request.

Matthew 11: 21-28 “A Canaanite woman came down from the hills and pleaded, “Mercy, Master, Son of David! My daughter is cruelly afflicted by an evil spirit. Jesus ignored her. The disciples came and complained, “Now she’s bothering us. Would you please take care of her? She’s driving us crazy.” Jesus refused, telling them, “I’ve got my hands full dealing with the lost sheep of Israel.” Then the woman came back to Jesus, went to her knees, and begged. “Master, help me.” He said, “It’s not right to take bread out of children’s mouths and throw it to dogs.” She was quick: “You’re right, Master, but beggar dogs do get scraps from the master’s table.” Jesus gave in. “Oh, woman, your faith is something else. What you want is what you get!” Right then her daughter became well.”

Jesus ignored her. Wow. And she just kept asking. What did Jesus think of her persistence? He was impressed by her faith and his answer was then yes.

This was an invitation for this desperately seeking woman to step out on faith. To ask as she had never asked before. Then, to ask again. My sister, you now have an invitation to do the same. ASK AGAIN.

With faith, ask boldly again. Knock on that door again. Just because the answer has been no in the past doesn’t mean the answer is no today. Here we are in a brand new year, step on up with faith and ask again.

I mentor a sweet sweet woman in Texas who had been heart broken for 4 years as her son had abandoned their family and refused contact. She had tried everything she knew to try and she had made peace with believing she may never get to see her only son again. She asked again. After 4 years, the answer was yes. It was not only yes, but it was HECK YES. Everything that had stood in the way for 4 years was suddenly gone and her son returned to their family. They shared the most glorious Christmas together last week.

I don’t know how long you’ve been waiting and how many times you asked before, but the opportunity is here on this first day of a new year to ask again.

And the opportunity is also here for you to TRY AGAIN.

We not only avoid a potential no, we avoid potential failure. We try something once and when it didn’t happen easily for us, we ditch the pursuit and mark it off as impossible.

No, it’s not impossible. It’s just hard. And you are capable of hard things. It just takes time. And here you are with a new year. TRY AGAIN NOW SISTER.

What do you need to try again? Where have you failed and now you need to come back around again and give it your best effort? Yes, failure is possible, but failure is absolutely certain if you don’t try again.

Proverbs 24:16 says “The lovers of God may suffer adversity and stumble seven times, but they will continue to rise over and over again. But the unrighteous are brought down by just one calamity and will never be able.”

That’s a stumble. Now what you gonna do sister? You’re going to RISE AGAIN.

There you go … that’s the plan for how you’re going to start this new year of life. Welcome to 2021 … ask again and rise again.

It is time. The opportunity is here. Now.

By Lonnie|January 1st, 2021|Categories: Devotionals, Podcast|Comments Off on 762 Ask and Rise … Again