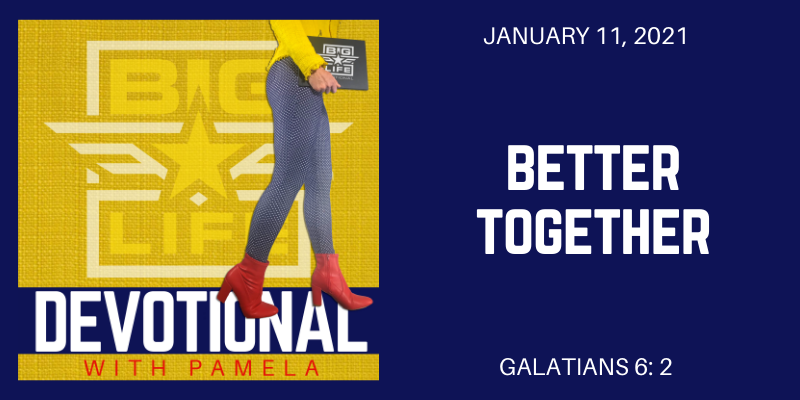 When Jesus walked this Earth, he was God in human form. He was still all-knowing and all-powerful. He had the power of Heaven and an army of angels at his fingertips. He was lacking nothing, yet he chose not to walk his path alone. He gathered friends and shared the journey with them.

Have you ever thought about that? If Jesus needed friends on his journey, don’t you think you’re going to need some on yours? We were designed to need one another. Designed to walk together. Your life works best when shared with others.

Jesus chose 12 people and those people became his disciples. They went everywhere together. He wasn’t a one man show trying to do everything on his own. He understood his impact was greater, and his journey was better, when shared closely with others.

Who are you sharing your life with? Who have you let inside the walls and shown your true self? Or are you still keeping people at a distance and pretending you don’t need anyone?

Is it possible that perhaps your load is too heavy to bare because you’re trying to carry it on your own? You’re exhausted trying to pretend like everything is okay when the truth is you’re barely hanging on. How about you let someone else carry that for a bit?

Jesus, on his way to Golgotha to give his life, could no longer carry his own cross. A bystander named Simon then carried the cross, literally, for Jesus. We don’t see Jesus fighting him on it. So, why are you refusing help with your cross, your burden, your heavy load to carry?

Galatians 6:2 “Carry each other’s burdens, and in this way you will fulfill the law of Christ.”

I’m not to go through hardships alone, and neither are you. We’re here to carry the weight of each other’s burdens. Christ has called us to make things easier for each other instead of harder. But dang if we aren’t in a time where we just make it harder for each other. We come in with our opinions and views and we post crap our fingers have no business typing. We have become cynical and self-righteous, adding onto the weight of someone else’s burden instead of helping them carry it.

Every time you add to the burden instead of help carry it, you are failing to fulfill the law of Christ. You are breaking his law. What is that law? Back up to chapter 5 of Galatians and it’s clear.

Galatians 5:14 “The entire law is fulfilled in a single decree: “Love your neighbor as yourself.”

Love each other. Love each other the way Jesus taught us to love. He shared his life fully. He washed the feet of others. He cared for a crowd of people who would be missing dinner. He was concerned for those who had a concern. Jesus MADE time. He stopped, he looked, he connected, he shared. Then he tells us to do the same.

Now maybe this hasn’t worked out so good for you in the past. Maybe you’ve tried to have a close circle of friends and it ended in bickering, then you decided you were better off doing this thing on your own. I’ve been there too. I’ve shut it all down after being hurt and pushed others out. THAT IS THE WORK OF THE ENEMY. Don’t let him win this. Don’t let him convince you everyone is bad and eventually you will just be hurt again. His goal is to isolate you for his attack. Get back in a circle sister!

Yes people will fail you. Yes they will hurt you. But share your life anyway.

WE NEED ONE ANOTHER. United we stand. Divided we fall.

Together we can carry the burden. Alone we are crushed.

Who is praying for you? Who knows about your burden and can help carry the load? I have a friend who helps me carry my burden on occasion, and I help her carry hers. We call it “trading prayers”. You see, sometimes I don’t even know how to pray about what is happening in my life. It’s so personal and overwhelming and my emotions get in the way, so I can’t seem to find the words. So, I ask her to pray for me, and I start praying for her. We just trade prayers, and the load is lighter.

I’ve found the older we get, the more we need our circle of friends. This is where real life starts happening. As we age, we start losing people. Life changes and it’s painful. Our bodies age and begin to fail. Kids grow up and become jackwagon young adults who make a real mess of things, and we need someone to share that with.

My mama always told me the women with close girlfriends were those with bad marriages. My mama was wrong. She understood that once Daddy died and she started borrowing my girlfriends to carry the burden. Now she has a circle of friends for her journey and she helps carry their burdens too.

We are better together. We are designed to love and care and carry. Open your life up and allow other flawed, broken people access to those secret areas of your life which you’ve tried so hard to pretend are okay. Don’t do this alone. Get connected. Share your world. Share your story. Share your burden. Share your strength. Share your prayers.

We’re in this thing called life together … it will be a whole lot easier if we just help each other. Start right where you are with what you have and do what you can for the next person. If you’re on social media, you have the power to make a difference in someone’s life with your typed word. It costs you absolutely nothing. Why wouldn’t you start there?

I’m pretty sure if Jesus were on this Earth today, he wouldn’t be counting followers. He wouldn’t be making nonsense posts encrypted to hurt some and embolden others. He would be using it for good. He would show up in the middle of personal needs and get involved. He would reach out. He would care.

And he would do it for even those who he knew would later betray him.

This is the kind of love we’re called to.

By Lonnie|January 11th, 2021|Categories: Devotionals, Podcast|Comments Off on 768 Better Together