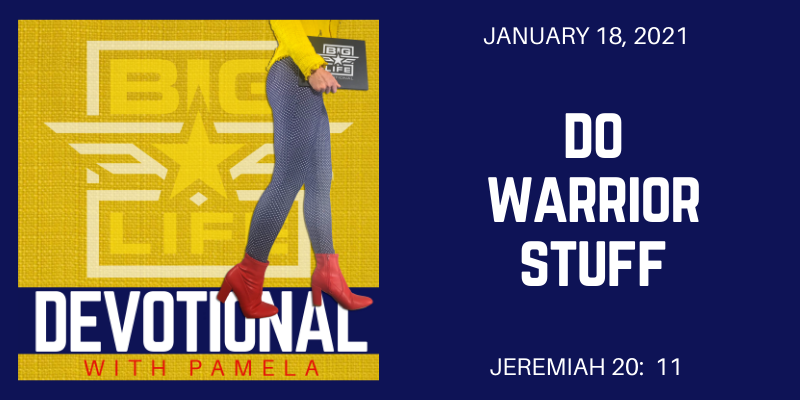 Within you is a warrior. A girl who shows up for battle and settles for nothing short of God’s divine destiny in her life. A girl with confidence in who she is and whose she is. That girl doesn’t back down. That girl cannot be defeated because she has the power of Jesus in her fighting her battles.

But let me tell you something, since the day you accepted him as your savior, he’s been in you fighting your battles … so why haven’t you been winning? Why haven’t you overcome this? Why are you still struggling? Could it be because while Jesus is fighting your battles, you’re standing in the way? And guess what, if you’re the one standing in the way, Jesus won’t fight you. He won’t cut you down. God has given you free will and you have the ability and the right to stand in your own way for the rest of your life as you wish. BUT YOU DON’T HAVE TO.

Today can be the day you get out of the way. Today can be the day you unleash the warrior in you. Today you can show up for battle and decide you will never again settle for a single thing short of the divine destiny God imagined for you before your first breath. Today Jesus could be given full access to do his complete healing and restoration in your life because you’re not standing in the way.

Jeremiah 20: 11 “But the Lord is with me like a mighty warrior; so my persecutors will stumble and not prevail. They will fail and be thoroughly disgraced; their dishonor will never be forgotten.”

I’ve spent the past 5 days with Beth and Kelly at Retreat. Beth is from Mississippi and Kelly is from Kentucky. Their southern accents start rubbing off on me and suddenly I’m talking with a twang and saying y’all a whole lot. That only happens because I’ve been WITH them.

Bonnie and Neill have been with us for the past 5 days at retreat as well. As a result, they were dancing on a boat yesterday breaking out of their shells and jumping in the fun. That’s likely not their normal behavior, but they have become like those they’re with.

So, our scripture today says the Lord is with me like a mighty warrior; so my persecutors will stumble and not prevail. Who are your persecutors? Who is imprisoning you? Accusing you? Defeating you? They’re about to fall.

Why? Because you’ve been hanging out with the mighty warrior and you’re becoming like him! Now you’re doing warrior stuff.

Now, let’s talk about your persecutors … that’s likely a charge led by you. You’re the leader of that gang. You’re the chief insult thrower, finger pointer, trash talker, nit-picker in your life. It’s you persecuting you. And the mighty warrior says it’s about to go down! Your bad habits, poor choices, and self-sabotage will no longer prevail here.

All the lies you believed that tell you you’re not worthy, you’re not of value, you’re not capable, and you’re not enough will be thoroughly disgraced. Lies are disgraced by revealing the truth. When you rise up as the warrior you were created to be as a result of being with the mighty warrior, the lies will be disgraced.

There will be proof you’re good enough because you showed up and did it.

The question of your value will be silenced because your value is on full display.

You will know you’re capable because you did the things you were questioning just this morning.

This is living warrior style. This is what warrior stuff looks like. Fight the good battle, the battle for the life you were created for. Conquer this crap that’s been holding you back and put it to shame. Step into the good plans your God has for you and never settle for less.

By Lonnie|January 18th, 2021|Categories: Devotionals, Podcast|Comments Off on 773 Do Warrior Stuff