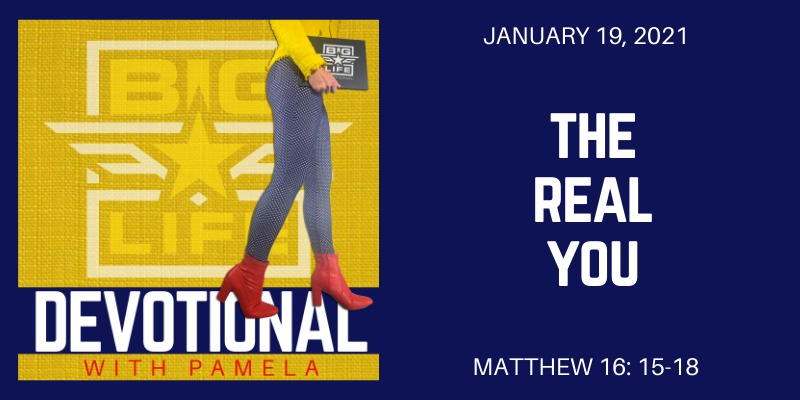 What is that little voice that tells you you’re not good enough? Why are you continually held back by the fear of falling short or lacking what it takes? And why do you question if the REAL YOU would be liked?

You’re not alone if you feel this way and have this internal battle. It actually has a name; it’s called Imposter Syndrome. In short, you feel like an imposter. Like you’re pretending your way through life and one day your cover will be blown. Is that you? I ask because sometimes it’s certainly me.

Imposter Syndrome is a psychological pattern which causes you to doubt your skills, talents and accomplishments as a persistent internalized fear of being exposed as a “fraud”.

Well let me tell you something … God knows your name, he knows your inner most details, he knows your past and he knows your potential, and he still chooses you. The REAL YOU is totally loved and that can’t be faked. God looks at you and says you are the perfect person for his good plans. You are exactly who he chooses to work with, in and through.

My favorite disciple in the Bible clearly struggled with Imposter Syndrome. Peter was adventurous and daring, yet he fought an internal battle which constantly told him he wasn’t good enough for what God was calling him to. In fact, in the beginning, his name wasn’t Peter, he was Simon.

The name Simon means listening. You know, like the game Simon Says is a listening game. Simon was always listening to the voices that told him he wasn’t good enough, but Jesus changed Simon’s name to Peter, which means Rock. He would use him as the firm foundation to build his Church. But first, Simon would have to understand he was worthy of God’s calling.

Luke 5: 2-11 “Jesus saw at the water’s edge two boats, left there by the fishermen, who were washing their nets. He got into one of the boats, the one belonging to Simon, and asked him to put out a little from shore. Then he sat down and taught the people from the boat.
When he had finished speaking, he said to Simon, “Put out into deep water, and let down the nets for a catch.”
Simon answered, “Master, we’ve worked hard all night and haven’t caught anything. But because you say so, I will let down the nets.”
When they had done so, they caught such a large number of fish that their nets began to break. So they signaled their partners in the other boat to come and help them, and they came and filled both boats so full that they began to sink. When Simon saw this, he fell at Jesus’ knees and said, “Go away from me, Lord; I am a sinful man!” For he and his companions were astonished at the catch of fish they had taken.
Then Jesus said to Simon (who would later become Peter), “Don’t be afraid; from now on you will fish for people.” So they pulled their boats up on shore, left everything and followed him.”

Notice he said “go away from me Lord, I am a sinful man.” This was Simon’s declaration of “I’m not good enough.” But Jesus never flinched. He didn’t withdraw hearing of Simon’s shortcomings. Instead Jesus responded to him and said “Don’t be afraid; from now on you will fish for people.” This was Jesus’ way of saying, “yip, I already know everything about you and you’re wrong about you. You are good enough because I’m making you good enough, and now we’re going to level up. You’re going to do even greater things with me.”

vs 16 Simon says “You’re the Christ, the Messiah, the Son of the living God.”

vs 17-18 Jesus says “God bless you, Simon, son of Jonah! Now I’m going to tell you who you are, really are. You are Peter, a rock. This is the rock on which I will put together my church.”

His entire identity changed when he acknowledged who Jesus is. He overcame the lifelong voices that told him he wasn’t worthy and went on to do exactly what he was created to do in his lifetime.

AND SO CAN YOU.

Who is Jesus to you? What does he say about you?

This is your truth. Now, believe that truth and build on it.

Through Christ Jesus, you are more than enough. He has made you more than a conqueror, you are a champion. Nothing will be impossible when you’re showing up with God.

Will the voices go away? Nope, probably not. But when you stop feeding the voices with your choices, they get weaker and you get stronger. When you hear that voice that tells you you’re a fake and the real you is weak, broken, stuck and incapable of change, you rise up and declare Jesus has made you to be more than a conqueror. The real you is God’s masterpiece and you are more than enough. You are here today fully equipped and lacking nothing, ready to live the life you were created for.

Now, listen to nothing else and move forward to become exactly who God says you will be.

By Lonnie|January 19th, 2021|Categories: Devotionals, Podcast|Comments Off on 774 The Real You