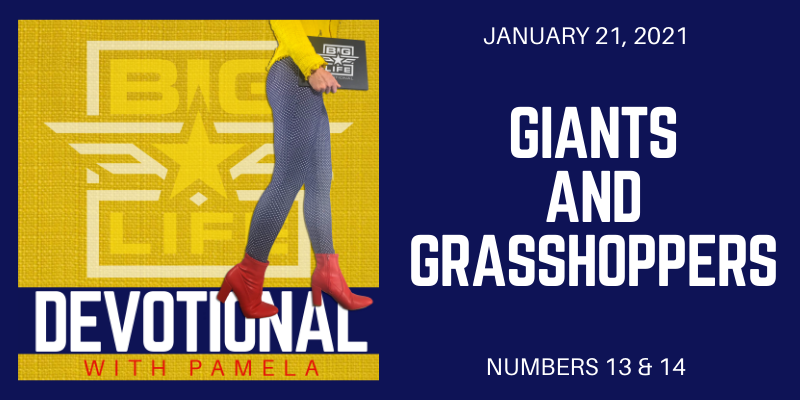 Does your mind carry you away in fearful thoughts of darkness? Is the “what if” scenario continually playing out leading to worst case?

What if this all falls apart?
What if I fail again?
What if everything goes wrong?

This is completely normal, right? We all have those fleeting thoughts … but honey, there’s a difference between fleeting and flooding. Fleeting thoughts come and they go quickly. Flooding thoughts drown us with an overwhelm of negativity.

The Bible tells us a story about the cost of thoughts like these. In Numbers 13 & 14 we read of Moses sending 12 men ahead of the Israelites to spy on the land of Canaan where they desired to live. This was a land God had promised to the Israelites when they left Egypt and their intentions were always to go there. But they knew taking this beautiful, promising land would not be easy, so the spies went ahead of the crowd to see what they were up against.

After 40 days, the 12 men returned with fruit and reports that indeed it was a bountiful land flowing with milk and honey. It was like a paradise compared to the wilderness where the Israelites had set up camp. But there was one problem, the Canaanites who lived there would surely fight to keep their paradise.

The returning men said “We can’t go up against them! They are stronger than we are!” So they spread this bad report about the land among the Israelites: “The land we traveled through and explored will devour anyone who goes to live there. All the people we saw were huge. We even saw giants there. Next to them we felt like grasshoppers, and that’s what they thought, too!” (Numbers 13:31-33)

But one of the men who had spied on the land had a different thought. Caleb said “The land we traveled through and explored is a wonderful land! And if the Lord is pleased with us, he will bring us safely into that land and give it to us. It is a rich land flowing with milk and honey. Do not rebel against the Lord, and don’t be afraid of the people of the land. They are only helpless prey to us! They have no protection, but the Lord is with us! Don’t be afraid of them!”

Everyone else who saw the opposition said it was impossible. Caleb said it was possible. Who do you think the Israelites believed?

Here they stood on the edge of their Promised Land, and they backed down. You know why? Because what should have been a fleeting thought became a flooding thought. The people began weeping aloud and cried all night. They rose up in complaints and demanded a new leader to take them back to Egypt where they had been slaves.

Now notice, nothing had really happened here. Simply the majority said they were facing giants if they continued. It was the thought of these giants that kept them from moving forward. And it was their thought of what the giant people must have thought about them. They said they felt like grasshoppers compared to these giants, and that’s what the giants thought too. How did they know what the others were thinking? There was no exchange of conversation. No insults were thrown, yet insult was taken. Defeat was assumed.

Why have you backed down to your giants? Why are you believing the stories you tell yourself of darkness, sadness and bad endings? What are you missing as a result? Seriously, what beautiful land could you be living in, but you have never arrived because you believed the negative stories you tell yourself of it being too hard for you, too late for you, too good for you. And I wonder what God thinks of you selling yourself short and making your giants so big?

Well take a look at what God had to say about the Israelites believing the worst case scenario of impossible giants and choosing not to move forward: Numbers 14: 22-24 “Not one of these people will ever enter that land. They have all seen my glorious presence and the miraculous signs I performed both in Egypt and in the wilderness, but again and again they have tested me by refusing to listen to my voice. They will never even see the land I swore to give their ancestors. None of those who have treated me with contempt will ever see it. But my servant Caleb has a different attitude than the others have. He has remained loyal to me, so I will bring him into the land he explored. His descendants will possess their full share of that land.”

And guess what, for 40 years God’s people wandered around in that wilderness and an entire generation died never possessing what was already theirs. All that time it wasn’t impossible. All that time God had made a way, but they had to walk the path.

When we refuse to walk the path, we miss that God has made a way. When we believe the worst case scenario stories we tell ourselves, we miss the miraculous stories God has available for us.

Caleb, the one who saw the giants but still believed God over his fear, survived and possessed the promised land. Why? Because of his attitude of faith. His attitude was different because his thoughts were different. The negative thoughts were fleeting, not flooding.

Now, where does God want to take you and what does he want to make possible for you? If you want to experience it, you must control your thoughts and your attitude. Reign in the negative thoughts that always dwell in darkness and defeat. Your life will follow your thoughts and honey, that’s not a good destination.

God has good plans for you. Focus on those good plans.
He has gone before you and made a way. Focus on the way forward instead of the steps backward.

When the “what if” scenarios come prancing through the gates of your mind, and they will, they always do … remember you always have a choice. Let them flood you or let them fleet on by.

Replace the negative what if with a positive what if. It requires the same energy and produces a radically different result.

Stop making your giants so big. You’re not a grasshopper. You are a mighty warrior through Christ Jesus. Start thinking like one!

By Lonnie|January 21st, 2021|Categories: Devotionals, Podcast|Comments Off on 776 Giants and Grasshoppers