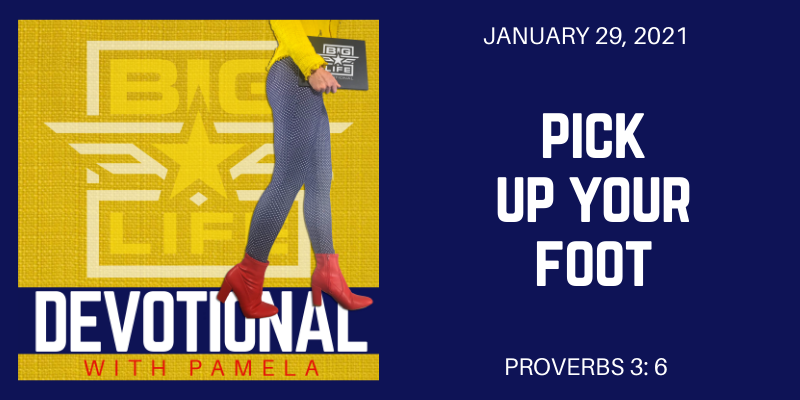 God is asking something of you today. He has met you here today as a direct result of you seeking him, and now he’s asking for you to do one thing. Just one thing, not 10 things, one. Will you do this one thing? Will you respond to his request with your obedience?

Here’s his request: PICK UP YOUR FOOT.

That’s it. Will you just be willing to pick up your foot and stop worrying about where it lands?

We like to be certain, don’t we? We like to not only know exactly where the next step is, but we like to know where the next 7 steps will take us. We want to see where this will lead and what God is doing, but he simply wants your obedience in picking up your foot now.

This is faith. Your job is to lift your foot. God’s job is to provide the path.

It’s exhausting trying to pave those roads on your own isn’t it? You’ve been trying to map out that 10 year plan and one month into it the ducks are no longer in a row and instead they’re all out of order having a rave. God giggles and says “my girl, I never asked you to make the way. I only asked you to pick up your foot.”

Proverbs 3:6 “In all your ways acknowledge Him, And He shall direct your paths.”

Cool … now what does that mean to me? How do I do that today because I would really like to know where the heck God is leading me. In another translation it become clear ”
“think about Him in all your ways, and He will guide you on the right paths.”

And here’s another translation “Always let him lead you, and he will clear the road for you to follow.”

Are you letting him lead you, or are you out there with a road crew trying to build roads on your own?

The path is not yours to know. Where God will lead and how he will get you to the destiny he has in mind for you isn’t for you to know. It’s for you to discover on the journey. The only way you will ever discover all God has available to you in this life is to pick up your foot in obedience and not worry about where it will land.

Remember episode 776 called “Giants and Grasshoppers” with the story of the Israelites sending 12 spies out to the land which they wanted to take? The spies returned with reports on the people in their desired land being giants and they convinced everyone it was impossible to move forward and they should just stay in the wilderness. They wandered in that wilderness for 40 years because of fear. They wanted to know for sure where they were going and how they were going to get there, but when God didn’t show up with flashing signs and lit arrows leading the way, they stopped picking up their feet.

Have you gotten your role and God’s role twisted? Are you expecting him to pick up your foot for you? News flash … God won’t make you do a dang thing. You can sit here in your wilderness missing out on the abundance he has for you if you so choose. That would suck. That’s a crappy choice, but it’s yours to make.

Here’s all you have to do today to receive God’s best in your life.

Part 1. Show up with a willing spirit, an obedient mouth, and thoughts that align with God’s truth about you.

Don’t just rush on by that. What would a wiling spirit look like for you today? What would an obedient mouth talk about today, and what would that mouth STOP talking about today? And what is God’s truth about you? Who does he say you are? How does he see you? Get your own thoughts in alignment with God’s thoughts about you.

Part 2: Think about him in everything. Literally with everything, think about God. With the sunrise, think about how he painted that sky for you. With your coffee, think about how he gave life to the very coffee beans you enjoy now, he made them to grow, perhaps somewhere half way around the world, knowing you were the exact person who would be savoring them. Look at your dog, your husband, your children (maybe not in that order), and think about all God did to bring them into your life.

Just think about God, and as a result he will guide you on the right path. He will place that lifted, willing foot of yours in the perfect positioning for all he created you for.

Where will it land? Oh I have no idea. I don’t see exactly what God is doing here and where he is leading, but I absolutely trust when God says he has good plans for your life, plans to prosper you and not to harm you, plans to give you a hope and a future, HE UNDENIABLY MEANT THAT SPECIFICALLY FOR YOU. And that’s exactly what he will do.

But, you have a role in this. He won’t force you on the journey. You can sit in your wilderness, wonder and wander for all your days if you so choose, but know this … God has a future for you so much greater than that. He has a destiny for you which your human mind cannot imagine right now. He only wants to guide you on that path, but he won’t force you on it.

Where the Israelites messed up is they stopped lifting their feet. They dug in deep in their misery, the settled in their disappointment, and they believed the worst case scenario to be true. They believed the lie of the enemy that they weren’t good enough and therefore sacrificed the good their God had planned for them.

Don’t do that. Seriously don’t do that. Don’t believe the lie of the enemy which tells you you’re not good enough and sacrifice the good your God has planned for you.

God has good planned for you too my sister. Like ridiculously good, mind-blowing stuff. However all this believing you’re not good enough crap will totally keep you from ever stepping into that goodness.

You’ve been digging in your heels, buying the lies, dishing out excuses, and delaying your single act of obedience required here … pick up your foot.

There’s only one kind of foot God can guide … that’s the lifted foot. The one willing to be placed in faith on the path they cannot see yet. The one in motion. The one thinking about God in everything.

Where will God take you? Girl, I have no idea! But I know this much, you won’t be staying where you are! He has plans of promotion, plans of increase, and plans of purpose for you. Now, pick up your foot.

By Lonnie|January 29th, 2021|Categories: Devotionals, Podcast|Comments Off on 782 Pick Up Your Foot