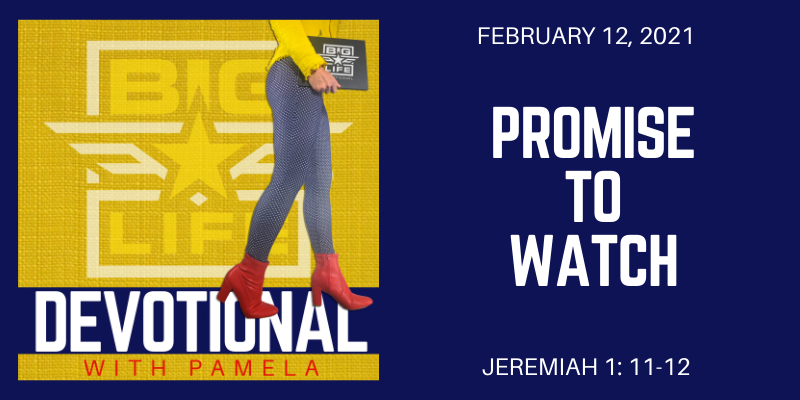 We are so quick to focus on what isn’t right and all we perceive as not good, meanwhile God has done so much for us without our continued gratitude. If he never did another thing for me in my life, I should still spend all my days praising him. He has done so much. Hasn’t he?

Now, know this … these things which you now perceive as not good and all that isn’t right today, just know God isn’t finished there. This isn’t the end and God’s not done yet. His work is still in motion and his power is still moving.

God spoke clearly to a young prophet named Jeremiah. He journaled his enounters with God and left us treasures today like Jeremiah 29:11 “For I know the plans I have for you,” declares the Lord, “plans to prosper you and not to harm you, plans to give you hope and a future.”

One of Jeremiah’s first interactions with God is recorded in Jeremiah 1: 11-12 :
The word of the Lord came to me: “What do you see, Jeremiah?”
“I see the branch of an almond tree,” I replied.
The Lord said to me, “You have seen correctly, for I am watching to see that my word is fulfilled.”

Jeremiah saw an almond tree as a sign of God watching to fulfill his word. I would have surely missed that as a sign, so I studied a bit more. The Hebrew word for almond is also translated to mean “to watch”. The almond tree represented God watching. God is watching to see that his word is fulfilled.

Here are a few of my favorite promises from God for us today:

And sweet child of God, his precious beloved daughter, he is watching closely everything that concerns you to ensure his promises are upheld. Every single one of his promises for you will be fulfilled.

James 1:5 God promises to give you wisdom if you ask. He is watching and waiting for you to ask for wisdom in what to do now. All you have to do is ask for his wisdom, and it will be given to you. And there’s a big difference between God’s wisdom and my smart ideas. Which do you want today? A human perspective with a limited view, or God’s perspective with knowledge of everything that ever has been and ever will be? I’ll take God’s perspective for $500 please Alex! And girl, all you have to do is ASK. Oh and one more thing, then after you ask, make sure you are open to receive. Sometimes we ask without ever making space to receive.

1 Corinthians 10:13 God promises to provide a way out of temptation. Temptations come, heck you’ll be tempted today! Tempted to do the very things you know you shouldn’t do. How often are you falling victim to those temptations that get you off track and leave you feeling disappointed in yourself at the end of the day? Did you know with every single temptation, God is watching closely to ensure you have a way out of it? He is ALWAYS giving you another way. Will you start seeking the other way today? God’s way out of that temptation. His power dwells within you and there’s not an ounce of weakness in that power. YOU CAN DO THIS. God has made a way for you.

Hebrews 13:5 God promises to never leave us or forsake us. And when God says NEVER, that’s all inclusive AIN’T EVER GONNA HAPPEN SISTER. There’s simply nothing you could do to make God love you any less. There’s nothing you could ever do to make God not want you back. You’re safe in him. He’s not turning away from you. He’s here today and he’ll still be waiting on you tomorrow if you’re still running. God is ALL IN on this relationship with you. He held nothing back, played his best cards and covered everything you could ever do with the blood of his son Jesus. Rest in that. Find your confidence in that. He chose you then, and he still chooses you today. He will always watch over you and be near. Promise.

Philippians 1:6 God promises to finish the good work he started in you. His eye is always on you and his power is always around you, working to bring out your greatest potential. He had a destiny in mind for you when he formed you with his own hands. That destiny has not been cancelled. Maybe it’s been delayed because you’ve been stuck in your stupid years, but girl it’s not cancelled. He’s not done yet. He’s still working on you, in you, and through you. He’s going to finish what he started in you. That’s a promise.

Maybe, just maybe if you want to see what he’s been up to sooner rather than later, a little surrender might be good here. God, I surrender to the good work you started in me and I’m going to stop fighting you along the way. Have your way in me.

God is here today, working in every detail of your life. His attention is on you. Think about that … you have the attention of the Almighty. The one who holds the whole world in the palm of his hand is concerned about YOU. Cares for YOU. Wildly loves YOU. And honey, there’s nothing he won’t do for you. He will move Heaven and Earth to show his love for you. He will create new paths to get you back on track for the good life he has planned for you, then he will watch your every step offering his divine guidance to get you there.

Jeremiah saw the almond tree as a promise. The almond means “to watch”. Enjoy an almond today and remember God is watching you to fulfill his promises.

By Lonnie|February 12th, 2021|Categories: Devotionals, Podcast|Comments Off on 792 Promise to Watch